The Bahujan Samaj Party (BSP) on Tuesday released its third list of candidates in Uttar Pradesh for the upcoming Lok Sabha elections, scheduled to be held in seven phases starting from April 11. The BSP is fighting the Lok Sabha elections in Uttar Pradesh with in an alliance with its former regional rival the Samajwadi Party and Ajit Singh’s Rashtriya Lok Dal (RLD). As per their seat-sharing arrangement, Mayawati’s BSP has got 38 seats. Of its total share of 38, the BSP has so far announced its candidates on 22 seats and is yet to announce names of 16 more candidates.

In Tuesday’s list, the BSP named five candidates for Dhaurahra, Kaiserganj, Sitapur, Mohanlal Ganj and Fatehpur Lok Sabha constituencies. While CL Verma is the party’s candidate from Mohanlal Ganj, Nakul Dubey and Sukhdev Prasad has been named from Sitapur and Fatehpur, respectively. Arshad Ahmed Siddiqui has been named as BSP’s candidate from Dhaurahra and Chandradev Ram Yadav will contest from Kaiserganj on the symbol of BSP. 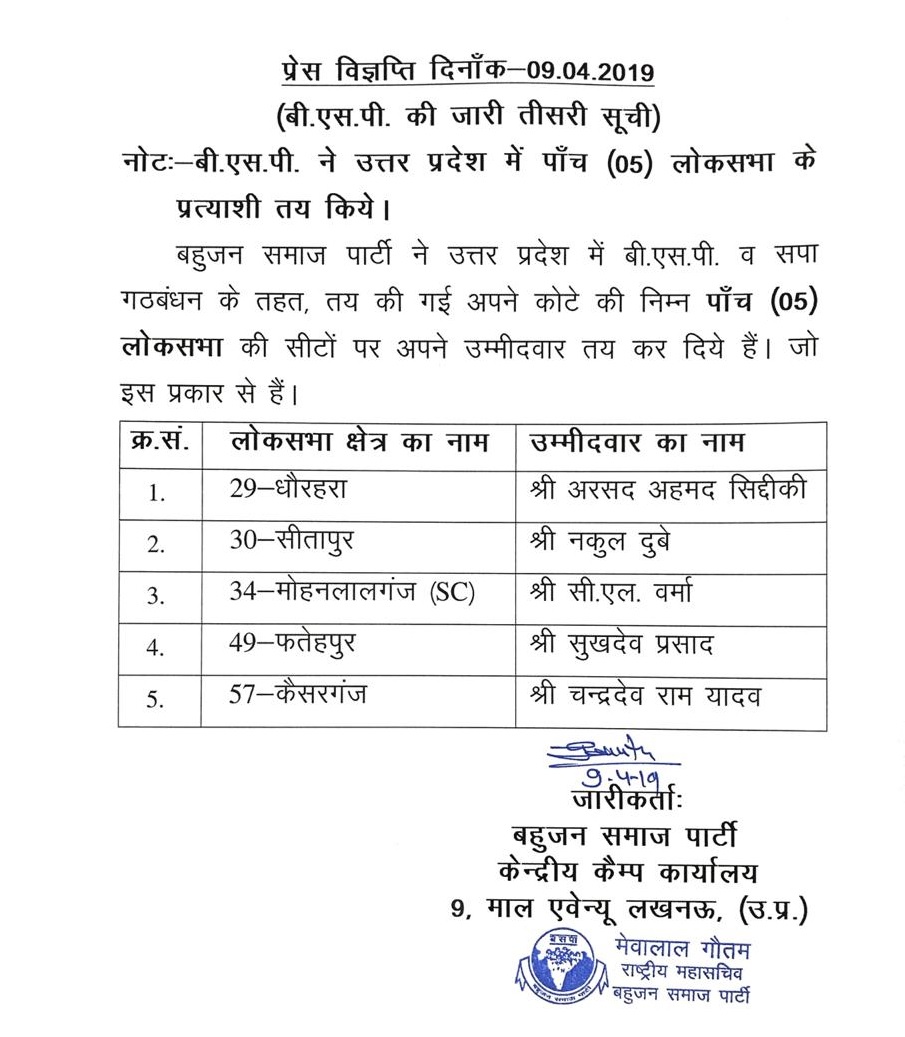 Meanwhile, a case has been registered against SP-BSP-RLD candidate for Bijnor Lok Sabha seat, Malook Nagar, for the alleged violation of the Model Code of Conduct, police said Tuesday. Nagar, who is a BSP leader, was booked on Monday after pamphlets in support of him were found on public buildings at Sambhalheda village in Miranpur town, Station House Officer Pankaj Tyagi said.

The pamphlets were put up without any permission following which Nagar was booked, he said. The SHO said Sunday that four women were arrested in Miranpur town for putting up pamphlets and posters on public buildings in support of Congress’s Bijnor candidate Nasimuddin Siddiqui.

Miranpur in Muzaffarnagar district falls under the Bijnor Lok Sabha constituency which goes to polls in the first phase on April 11.