As We Debate Over Whether Prime Minister Narendra Modi Will Get A Second Term Or Not, News Nation Has Conducted The Biggest Exit Poll Survey To Provide You The Most Accurate Data.

News Nation has conducted the biggest exit poll survey to provide you the most accurate data.

A bitterly fought marathon Lok Sabha Elections 2019, spread over 38 days, has come to end today as voting concludes for the seventh and final phase on the remaining 59 seats. With this, the focus has now shifted to exit poll results. According to the Election Commission notification, exit poll results data can be aired from 6.30pm. As we debate over whether Prime Minister Narendra Modi will get a second term or not, News Nation has conducted the biggest exit poll survey to provide you the most accurate data.

Exit poll trends will also set the tone for the equity markets in the initial part of the week, while the final outcome of the general elections on May 23 would build the road ahead for stocks, analysts said.

Vote Share of BJP is likely to be 45 per cent and that Congress is expected to be around 40 per cent. 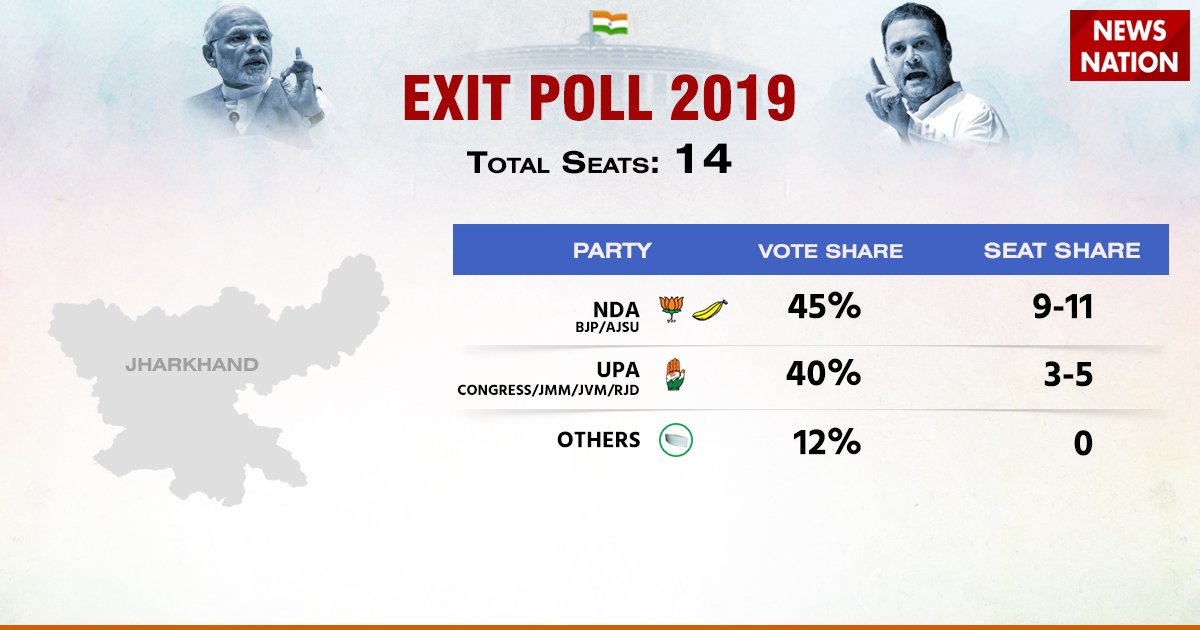 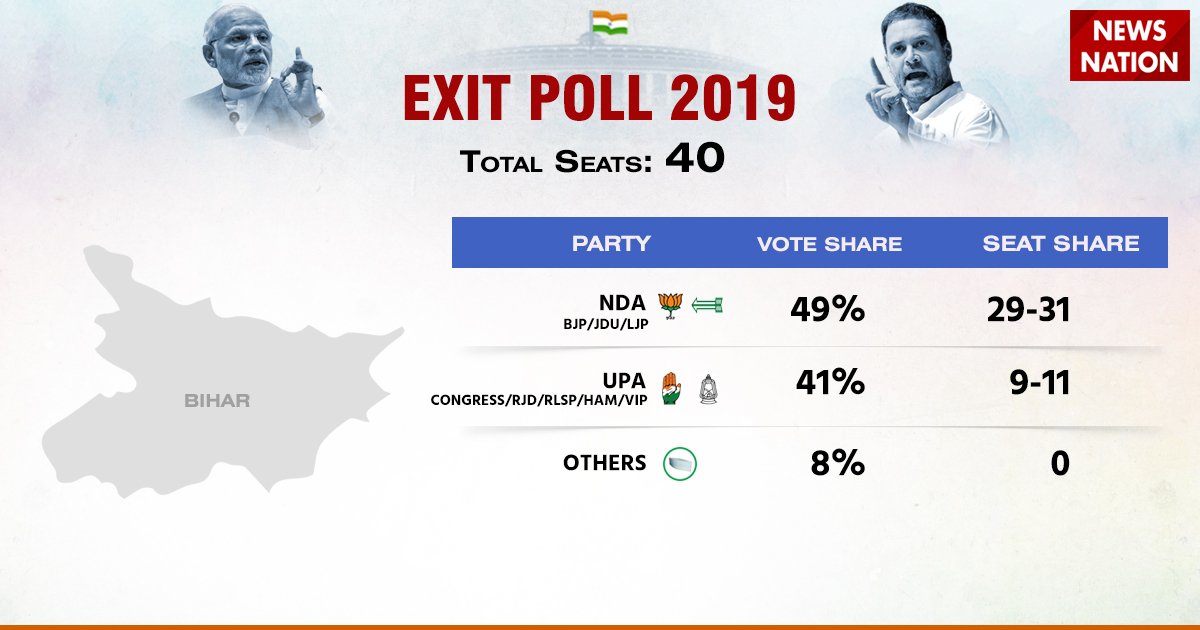 BJP may sweep Uttarakhand by winning all 5 seats

According to India TV-CNX Exit Poll 2019, the BJP-led NDA is likely to win 300 seats. The Congress-led UPA is projected to win 120 seats whereas the SP+BSP+RLD alliance may get 28 seats. The others are predicted to get 94 seats.

On the other hand, the SP-BSP-RLD alliance is expected to win 38-40 seats while the Congress may be confined to just two seats. 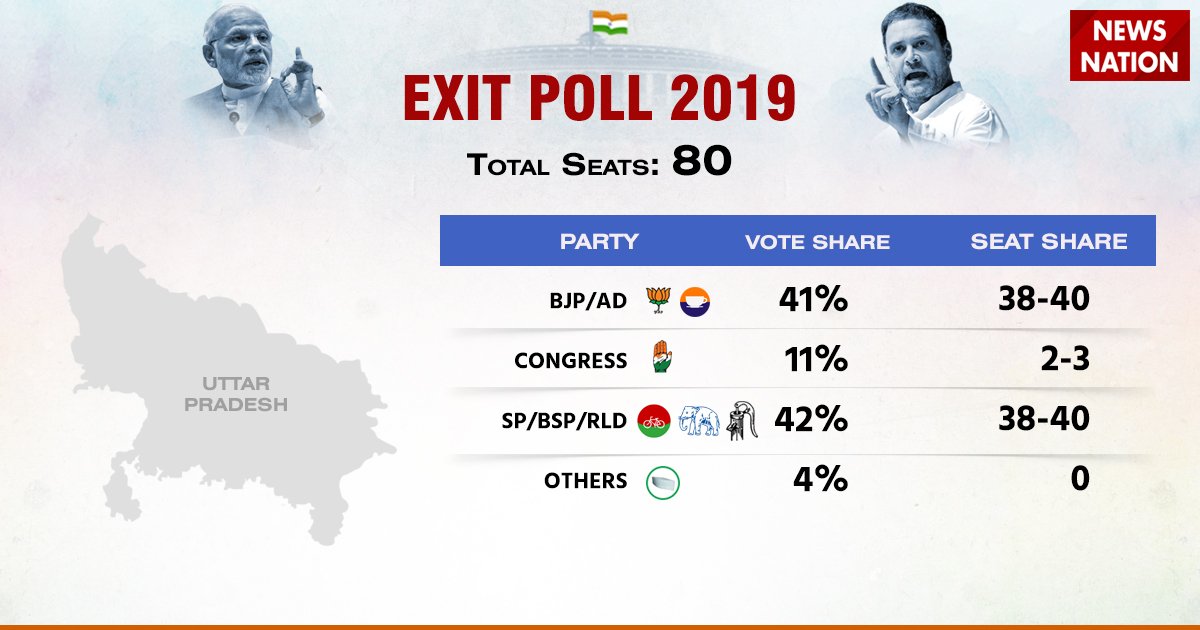 According to the News Nation Exit Poll, the BJP along with its ally Apna Dal is likely to win 38-40 seats in the state which sends 80 members to the Lok Sabha.

According to India Today-My Axis Exit Poll, the BJP is likely to win 2 seats in Manipur. The Congress may lose both the seats.

Today Chanakya Exit Poll predicts that NDA will get 340 seats and UPA will 70 seats.

NDA to win 12-14 seats in Jharkhand and Congress alliance to get 02 seats: India Today- My Axis Exit poll

BJP-Shiv Sena alliance is likely to win 33-35 seats while Congress-NCP may get 13-15 seats. 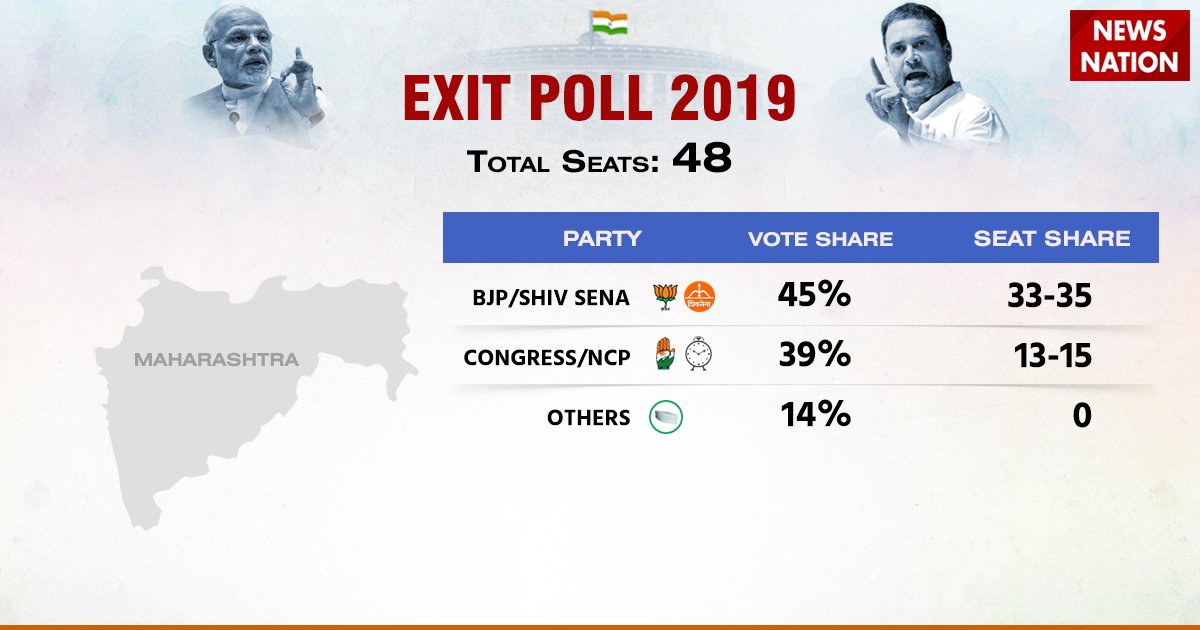 News Nation Exit Poll predicts 2 seats for BJP, 1 each for National Conference, PDP and Congress in Jammu and Kashmir. 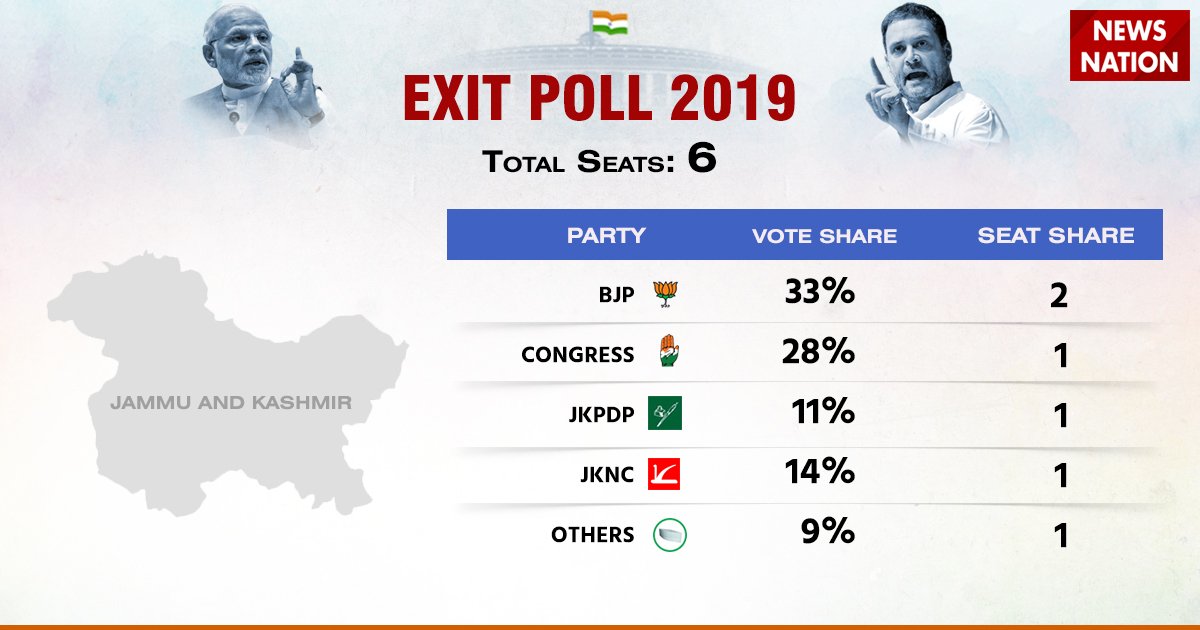 According to News Nation Exit Poll, BJP is likely to sweep all 7 seats in Delhi. 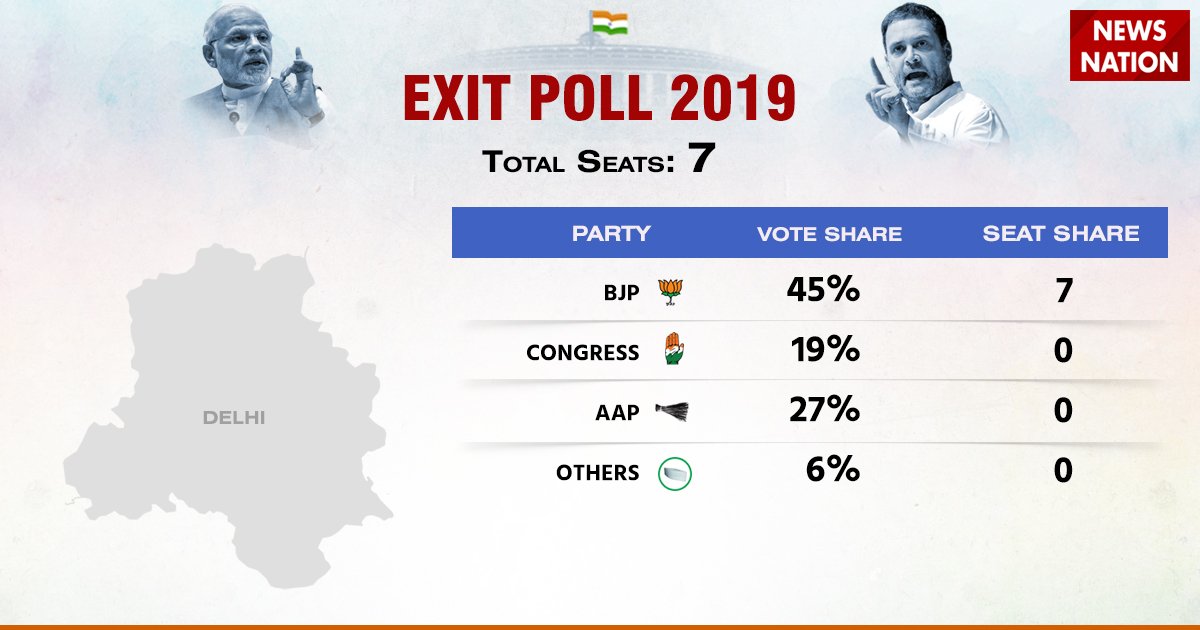 According to News Nation Exit Poll, BJP is likely to win 22-24 seats, while Congress may get 2-4 seats in Gujarat. 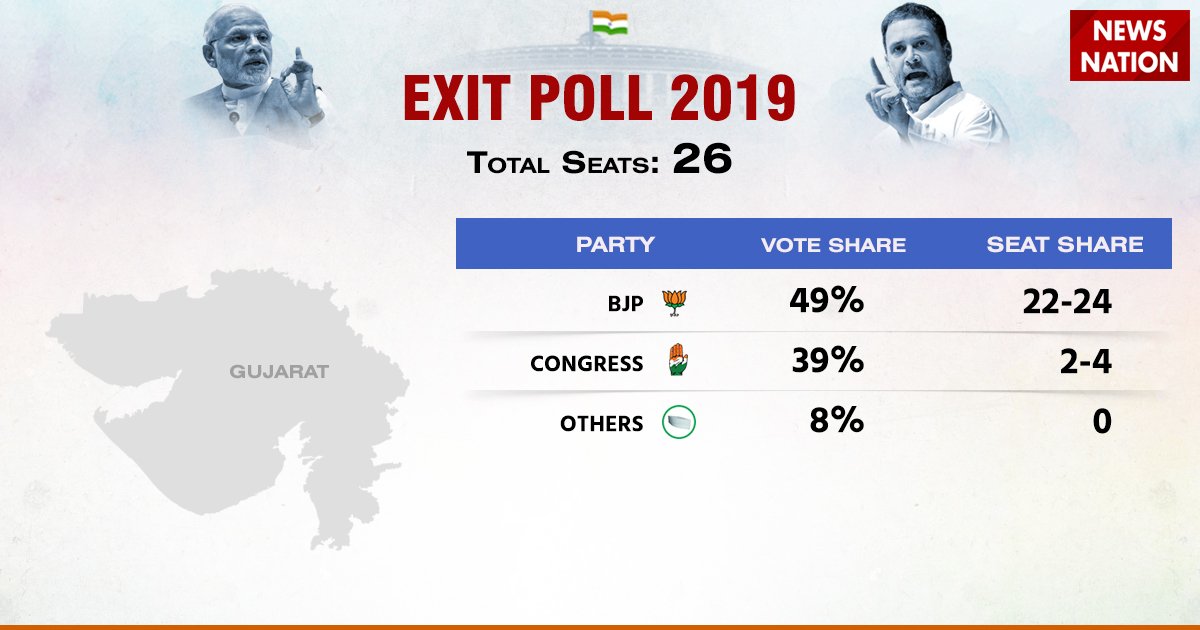 NDA to make a clean sweep in Bihar, likely to win all 38-40 seats: India Today - My Axis exit poll

BJP to get 19-23 seats in West Bengal: India Today

BJP-led NDA may get 6 seats, while Congress and its allies may win 3 seats in the North East. 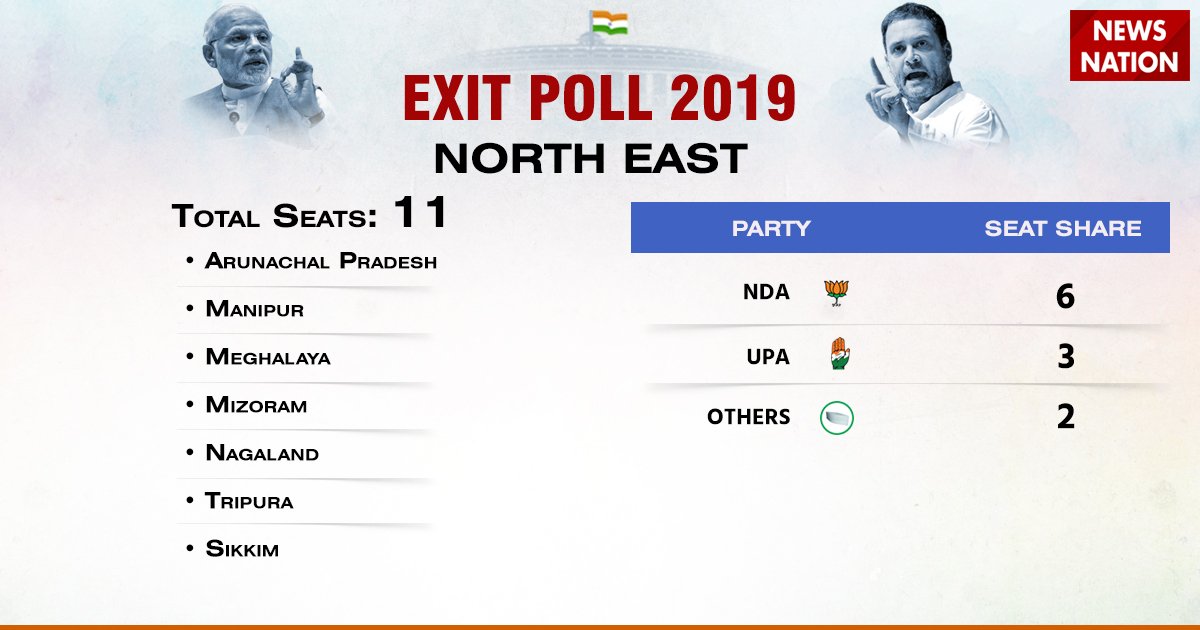 According to Republic, CVoter projects 18 seats for NDA in Karnataka

Congress and its allies may get 2-4 seats in Assam. 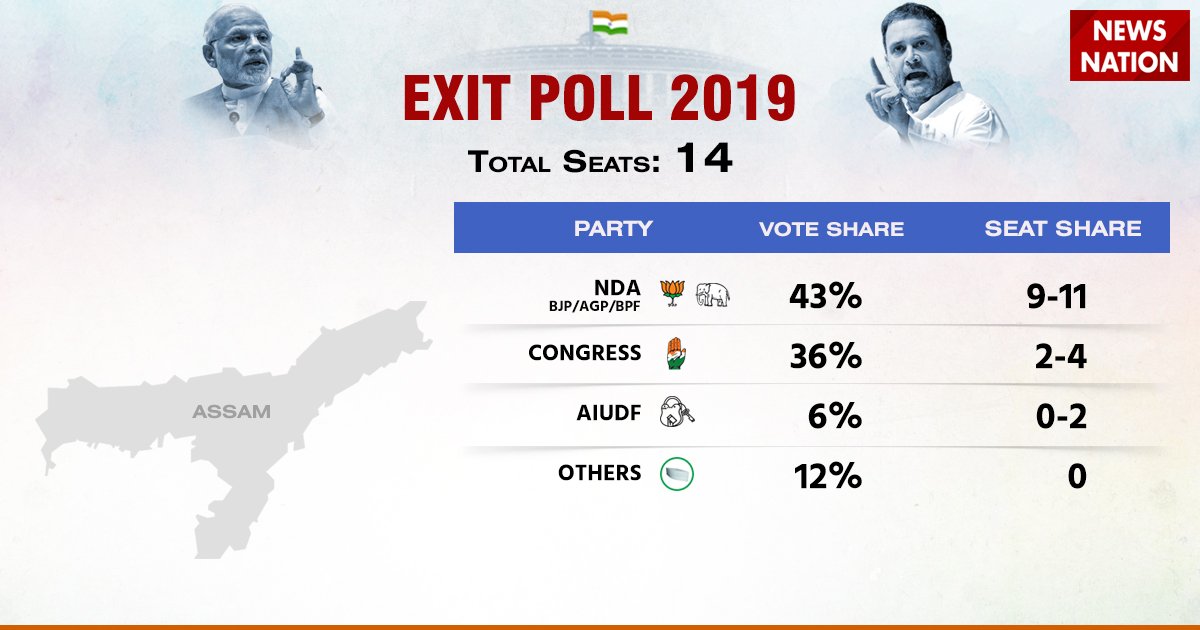 Congress is likely to win only 1 seat in Himachal Pradesh. 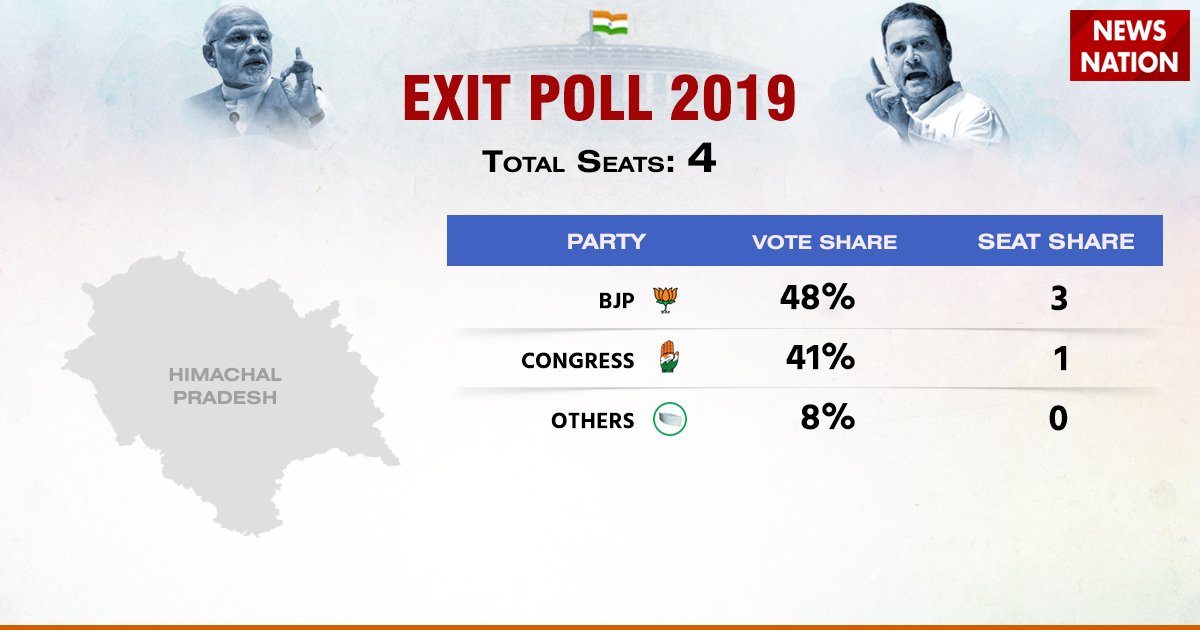 Congress may get 2-4 seats in Haryana. 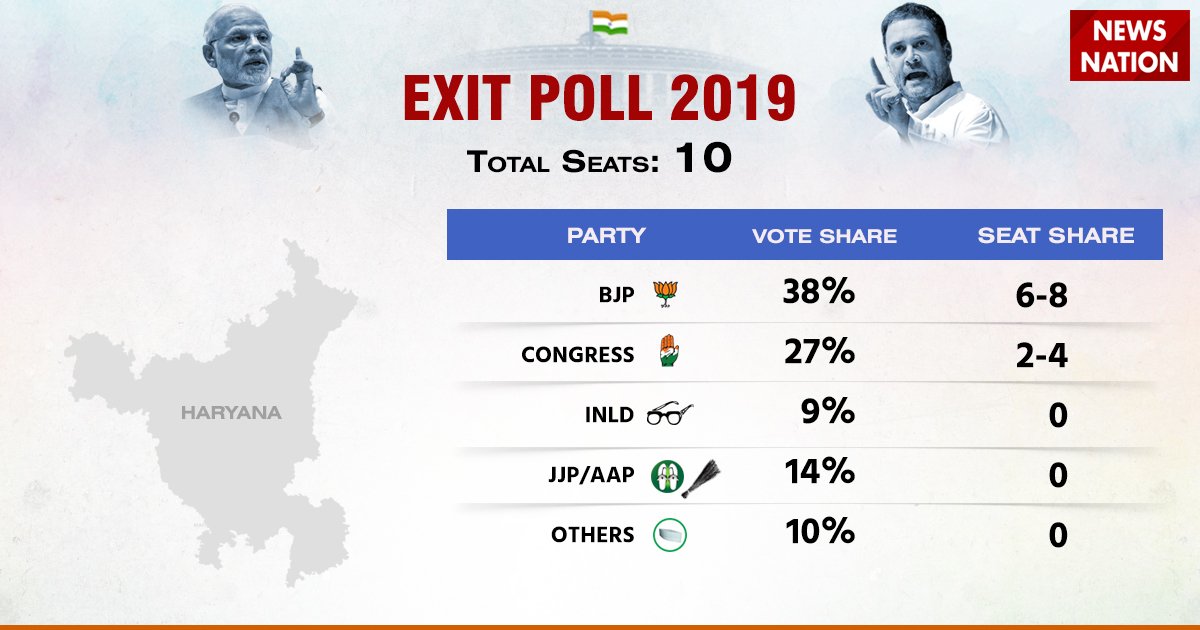 BJP to get 3 seats in Himachal Pradesh. 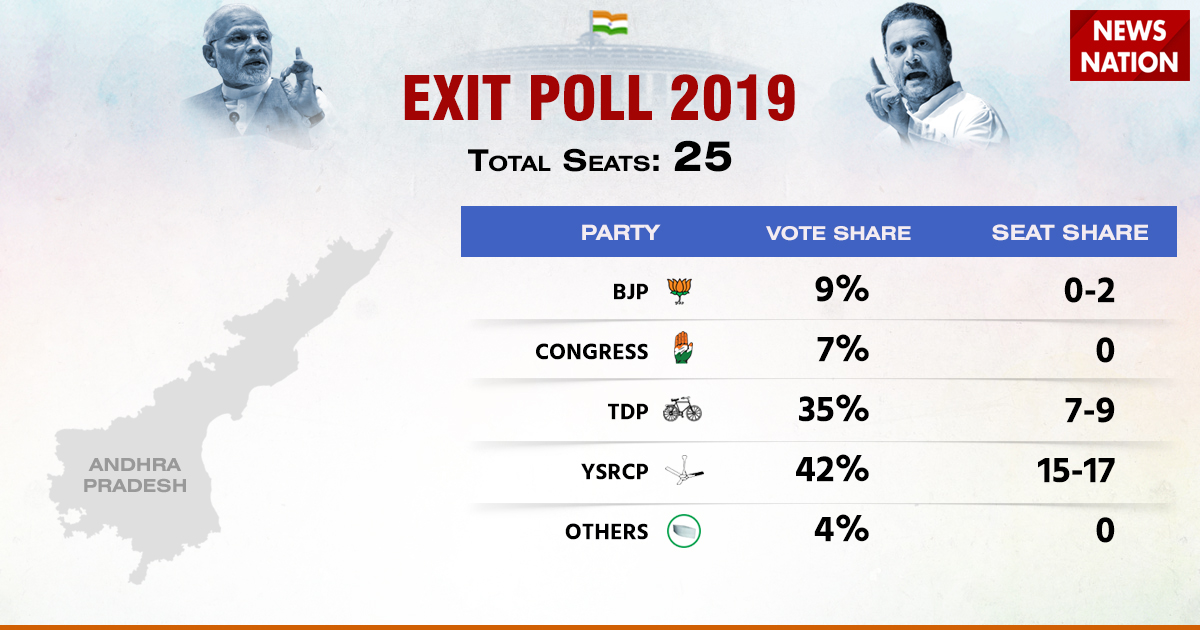 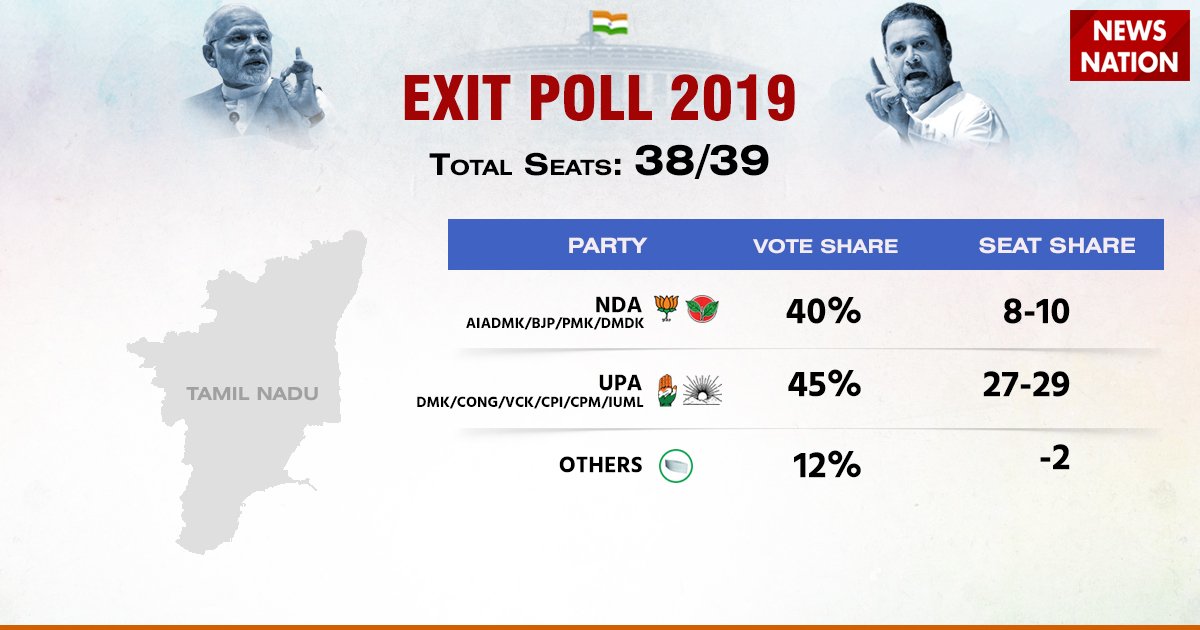 According to News Nation Exit Poll, BJP may get 21-23 seats while Congress may win 2-4 seats  in Rajasthan. 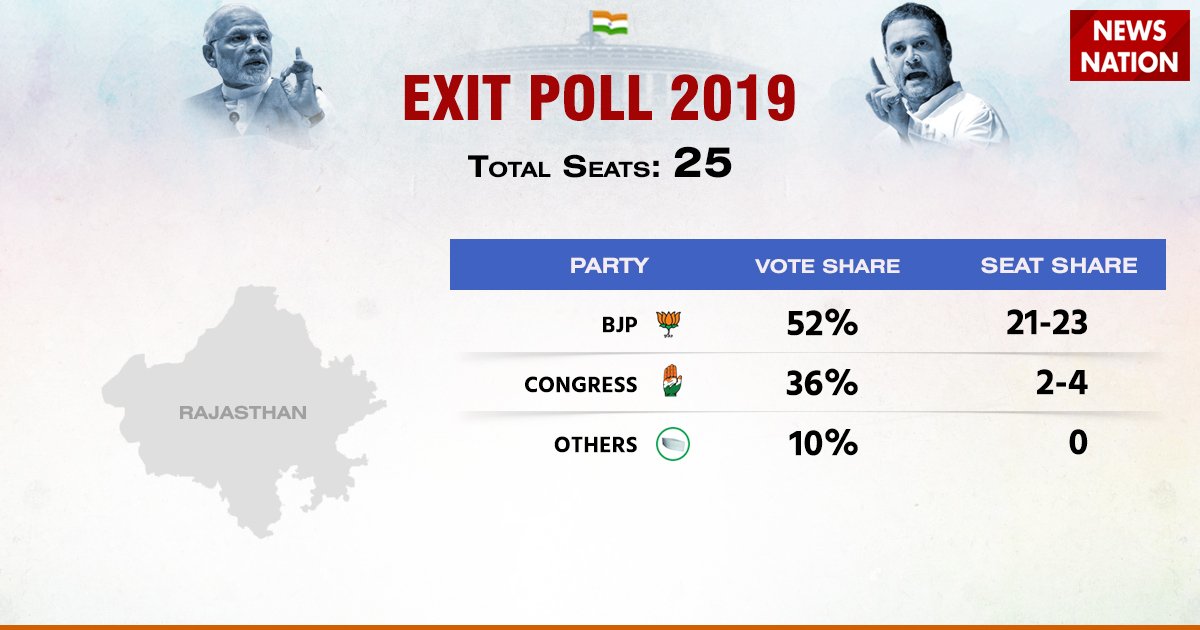 BJP to get 24 seats while Congress can get 5-7 seats in Madhya Pradesh: News Nation Exit Poll 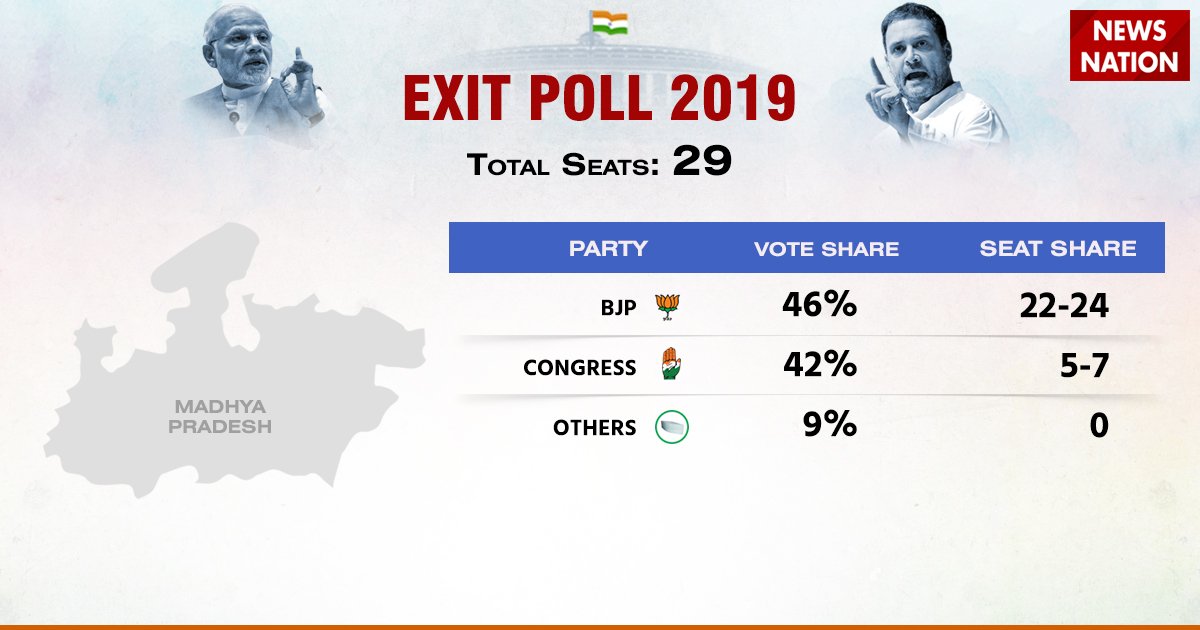 Republic projects 46-57 seats for the NDA in Uttar Pradesh.

Congress may gain 5-7 seats in Chhattisgarh while BJP may get 4-6 seats. 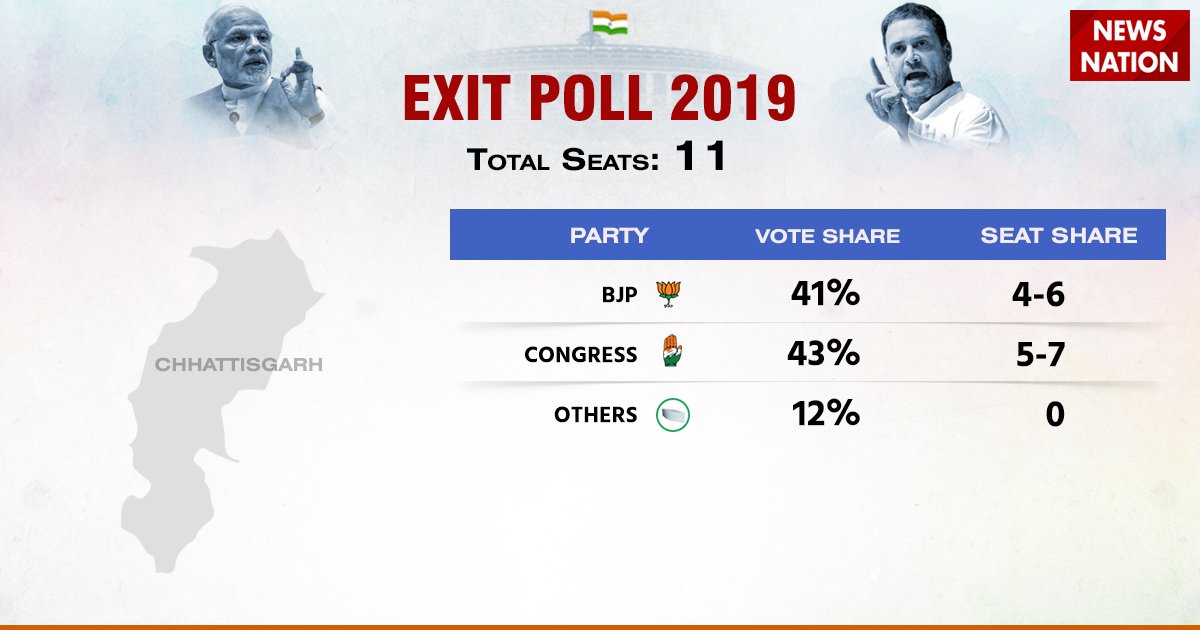 News Nation Exit Poll predicts 22-24 seats for BJP, while Congress may get 5-7 seats in Madhya Pradesh.

ABP predicts a clean sweep for Mahagathbandhan with 56 seats in Uttar Pradesh, BJP reduced to 22 seats.

TRS may sweep all 17 seats in Telangana. 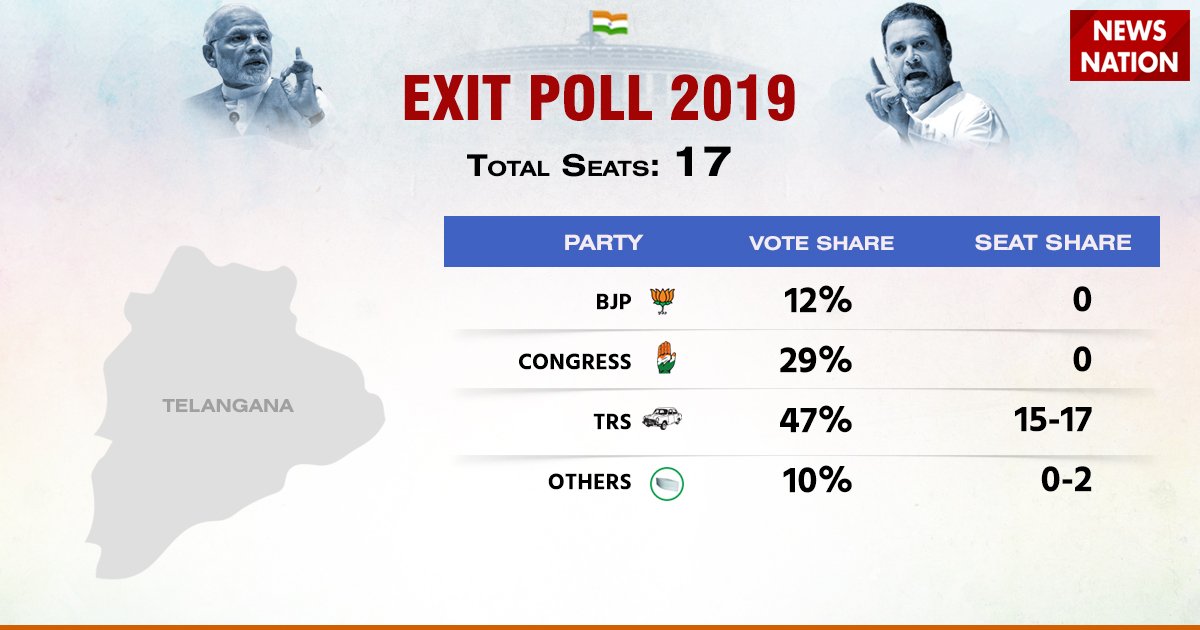 BJP in Karnataka to get 47 per cent vote share.

Congress/JDS may get 9-11 seats in Karnataka. 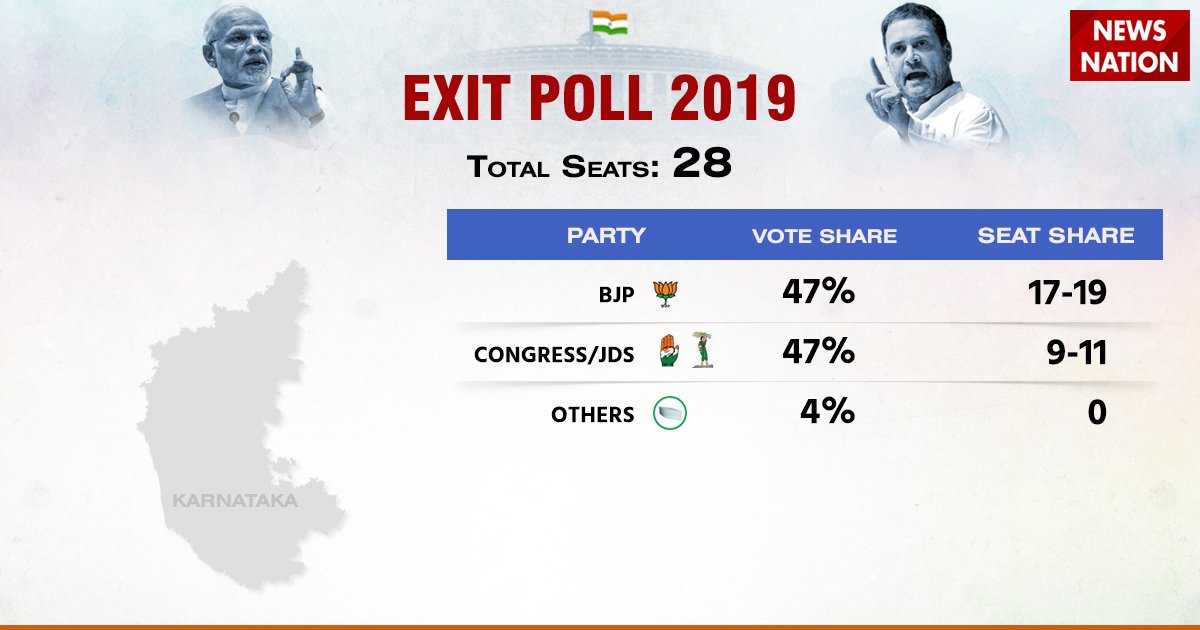 Left Front likely to get 5-7 seats in Kerala, 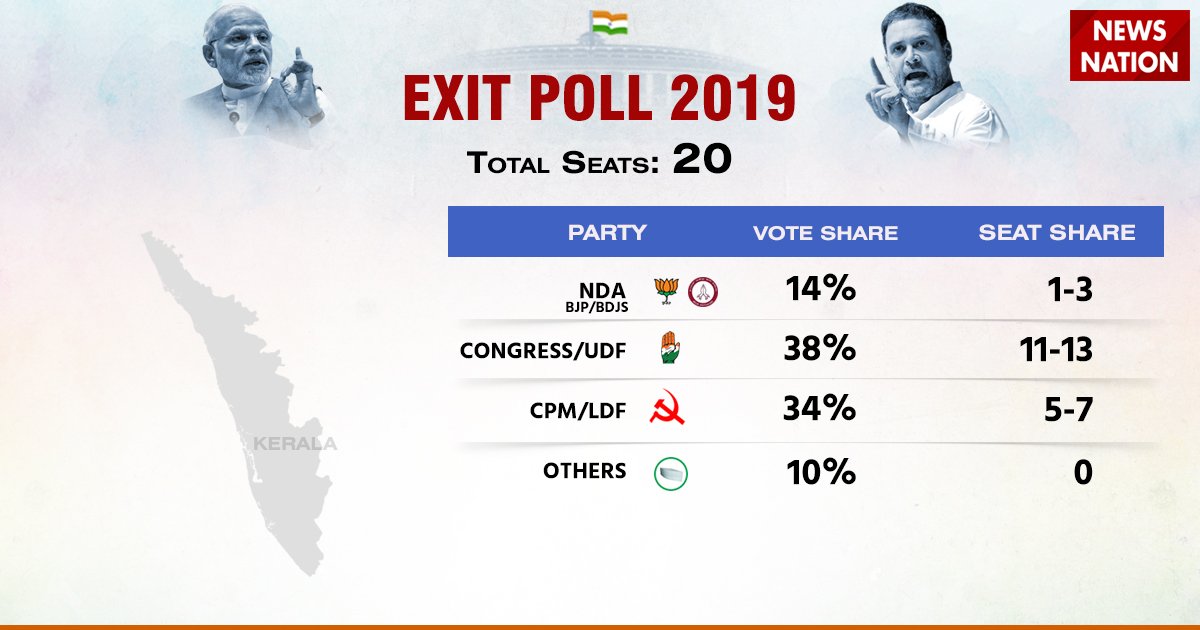 Vote share of UPA is expected to be around 30 per cent.

NDA likely to get a vote share of 38 per cent: News Nation Exit Poll 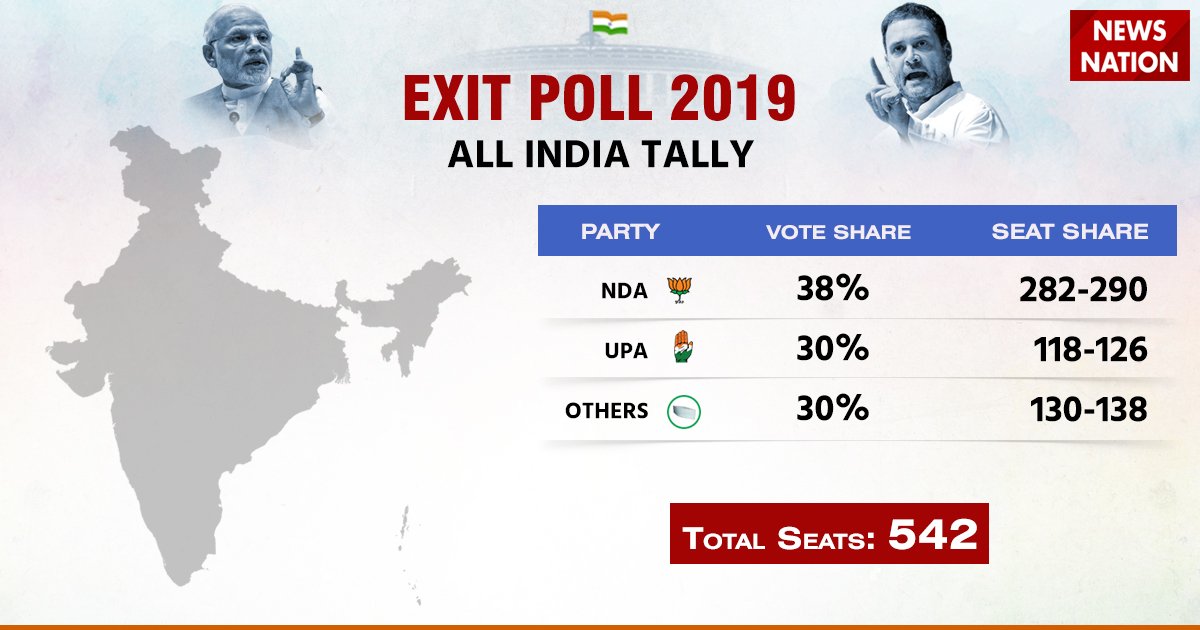 Congress is hoping to create a miracle in Uttar Pradesh with the introduction of Priyanka Gandhi Vadra into active politics.

Meanwhile, Election Commission said that polling has concluded in 542 parliamentary constituencies across states and Union Territories.

In order to stop the juggernaut of Narendra Modi and Amit Shah in the state, the BSP and the SP decided to bury the hatchet and formed 'Mahagathbandhan' along with Ajit Singh's RLD for 2019 Lok Sabha polls in Uttar Pradesh

Prime Minister Narendra Modi seeks to retain Varanasi which went to polls in the seventh and final phase on May 19. He faces challenge from Congress' Ajay Rai and SP's Shalini Yadav.

In 2014 Lok Sabha Elections, the BJP for the first time won 7 seats in Assam. 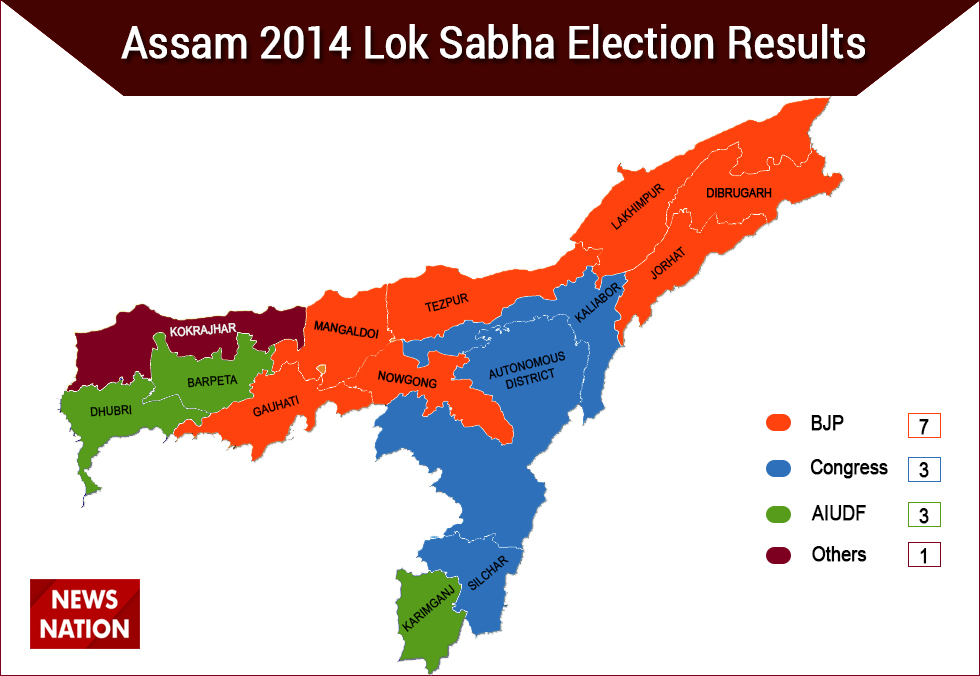 The United Progressive Alliance (UPA), led by the Indian National Congress, had won 59 seats in 2014.

The BJP won 31.0 per cent votes, which is the lowest share for a party to form a majority government in India since independence, while NDA's combined vote share was 38.5 per cent.

News Nation has conducted the biggest exit poll survey to bring to you the most accurate exit poll data.