West Bengal, Where BJP's Previous Performances Got Stuck To Mere Two Seats, Has Become A Key State For The Party To Focus On This Election Season.

With most of the Exit Poll results predicting a significant surge for the Bharatiya Janata Party (BJP) in Trinamool Congress bastion West Bengal, the state eagerly awaits the final Lok Sabha Verdict on May 23. According to the poll survey, conducted by News Nation, the BJP is likely to improve its tally with the first ever 'double-digit' win in 10-12 Lok Sabha seats. However, the Exit Poll still predicts a stronghold for the Mamata Banerjee-led All India Trinamool Congress (AITC) as it is projected to get 26-28 seats in the state. 42 parliamentary constituencies across West Bengal went to polls in all seven phases held between April 11 and May 19. The state, which has been marred by violence since the first day of the marathon Lok Sabha polls, has witnessed a bitter battle between Chief Minister Mamata Banerjee and Prime Minister Narendra Modi.

As the counting for 2019 Lok Sabha elections is less than 24 hours to go, here we bring you a detailed analysis on the previous years' election results ranging from 1999 to 2014 in West Bengal.

In 1999 general elections, the Communist Party of India (Marxist) emerged as the single largest party, winning 21 seats out of the total 42 seats in West Bengal. The party secured 35.57% of the votes polled. As compared to this, the All India Trinamool Congress (AITC) secured 8 seats bagging 26.04% of the votes polled. The Indian National Congress (INC), the Revolutionary Socialist Party (RSP) and the Communist Party of India (CPI) won 3 seats each. The Bharatiya Janata Party (BJP) and the All India Forward Bloc (AIFB) won 2 seats each. The total votes polled in the State was 3,52,92,965 during the 1999 Lok Sabha polls. 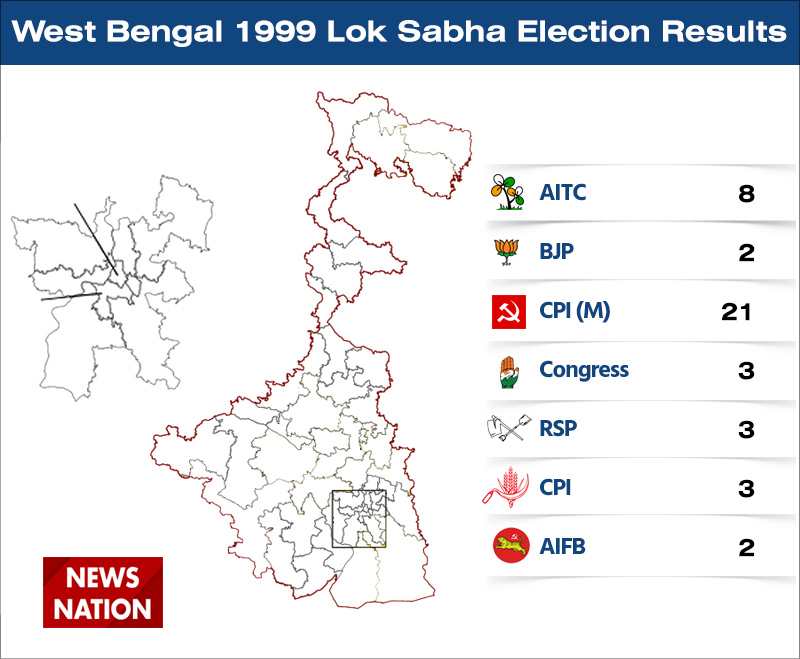 In 2004 too, the Communist Party of India (Marxist) continued it’s hold in West Bengal even with a bigger mandate. While the CPI(M) bagged 26 out of the 42 Lok Sabha seats in the state, the Congress was a distant second with wins in 6 parliamentary constituencies. AIFB, CPI and RSP clinched 3 seats each, leaving only one for the AITC. The BJP, on the other hand failed to open its account in the state. 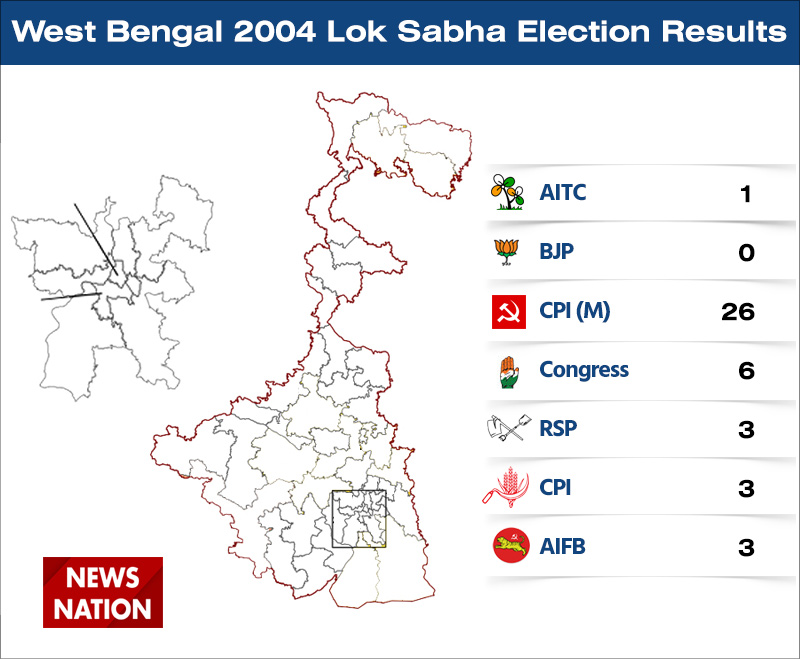 The 2009 Lok Sabha elections witnessed a major surge for the Trinamool Congress, which improved its tally from 1 to 19. The CPI(M), which ruled the state for 34 long years, was reduced to 9, leaving 14 seats for other regions satraps. While AIFB, CPI and RSP won two seats each, both the BJP and Independent was stuck to only one seat. The Congress bagged the remaining 6 parliamentary constituencies. 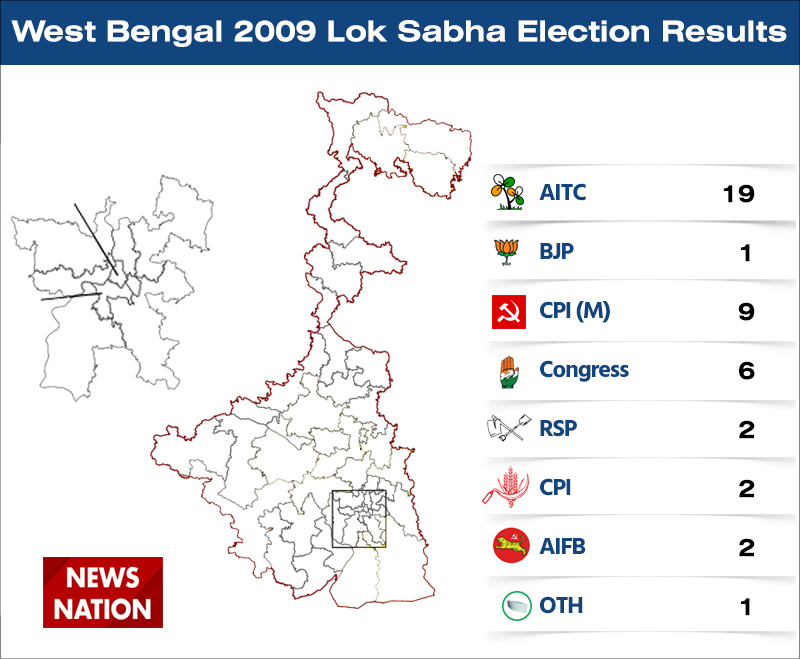 In 2014 Lok Sabha polls, the Trinamool Congress, in a thumping performance, swept 34 of the 42 seats decimating the Left in its victory march, while the BJP made impressive inroads winning two seats in the state. The Left Front lost all the seats it had won in 2009 elections, but could manage a win in two seats - Raiganj and Murshidabad, both of which were previously held by the Congress. The grand old party managed win in just 4 Lok Sabha seats. 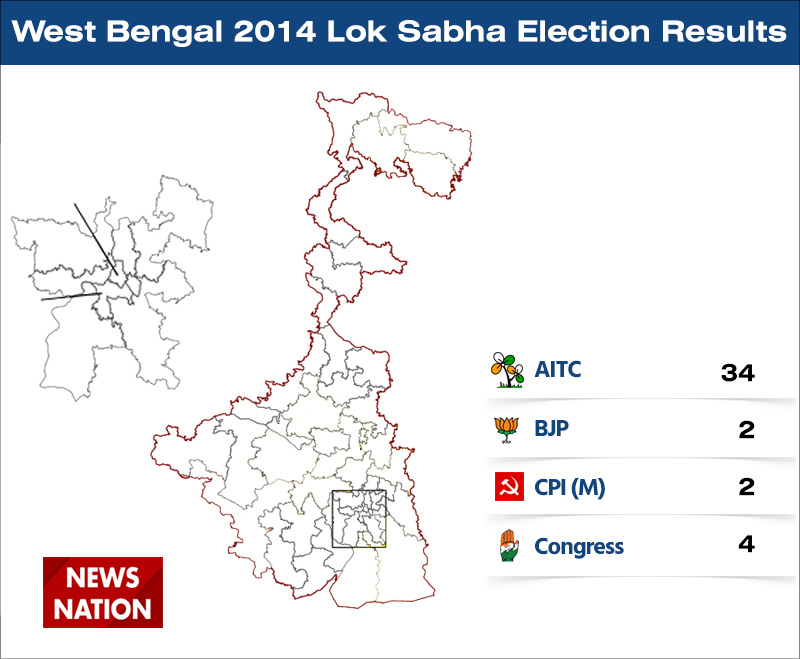 The 2019 polls saw a direct and fiery battle between Mamata Banerjee on one side and the BJP on the other. The Left Front and the Congress are fighting for their survival as the BJP has taken the number two spot in the state. All the bypolls and rural polls have indicated this trend. The BJP came second in Uluberia, Cooch Behar Lok Sabha and Noapara, Kanthi South Assembly bypolls. BJP president Amit Shah has claimed that the BJP will win 22 out of the 42 Lok Sabha seats from West Bengal. On the other hand, Banerjee, who is gradually becoming a key player in the political scenario of India, can be one of the strongest prime ministerial candidates in case of a fractured mandate on May 23.

West Bengal, where BJP's previous performances got stuck to mere two seats, has become a key state for the party to focus on this election season. The reasons include the AITC's ostensive appeasement policy to the minority, it’s rampant corruption and arrogance despite some good works for the rural Bengal and a vacuum in the opposition space, with the mainstream opposition -  Left and the Congress losing its support base rigorously. Lastly, the presence of millions of Hindu refugees, which made the state a soft underbelly of Hindutva politics, also gave the BJP a golden opportunity to beat the AITC.