Congress president Rahul Gandhi will file his nomination from Wayanad in Kerala today. He will also embark on a roadshow accompanied by his sister and AICC general secretary Priyanka Gandhi Vadra. Later in the day, he will campaign in Maharashtra's Nagpur. BJP president Amit Shah will address rallies in Telangana and Andhra Pradesh. He will hold a road show in Visakhapatnam from Urvashi Junction to  Kancharapalem Mettu. BSP chief Mayawati will also hold rallies in Telangana and Andhra Pradesh. Union minister Smriti Irani will begin on Thursday a two-day visit to Amethi, the Lok Sabha constituency of Congress chief Rahul Gandhi. 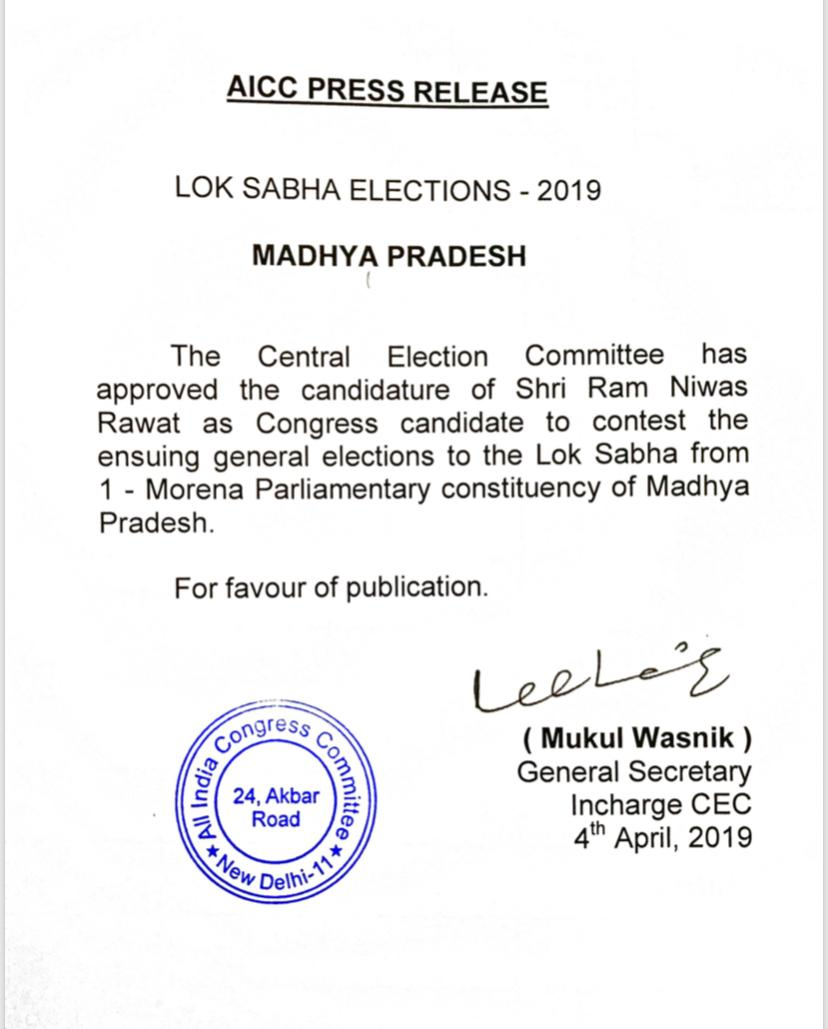 PM Narendra Modi to campaign in Coimbatore on April 9.

Prime Minister Narendra Modi will address two election rallies at Amroha and Saharanpur parliamentary constituencies in Uttar Pradesh on Friday. While polling in Saharanpur is scheduled to be held on April 11, voters of Amroha will exercise their franchise on April 18.

PM Narendra Modi on veteran BJP leader LK Advani's blog: Advani Ji perfectly sums up the true essence of BJP, most notably the guiding Mantra of ‘Nation First, Party Next, Self Last.’ Proud to be a BJP Karyakarta and proud that greats like LK Advani Ji have strengthened it.

2019 Lok Sabha Election Analysis: What happened in Punjab in 2014 polls? What will happen this year? READ HERE 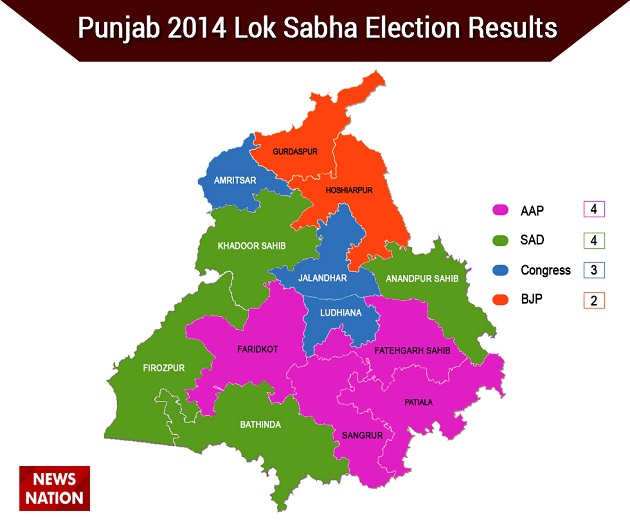 'Rs 72,000 a year to the poor' promise only after speaking to experts: Rahul Gandhi.

"Right from its inception, BJP has never regarded those who disagree with us politically as our “enemies”, but only as our adversaries": LK Advani.

In five years, Modi govt has given around Rs 5.56 lakh crore to Andhra Pradesh for its development: Amit Shah.

More than Rs 7,000 crore has been provided but Polavaram project isn't progressing. Andhra Pradesh isn't going to benefit from the project because it's money has been gobbled by the Chandrababu Naidu: Amit Shah.

There is no place for Chandrababu Naidu in the NDA, in case, he wants to join NDA after the elections: Shah.

Chandrababu Naidu is an ultimate opportunist leader. In 1983 he left Congress and joined great MGR. In 1989, he backstabbed NTR and became CM himself: Shah in his Andhra Pradesh rally.

Chandrababu Naidu is an ultimate opportunist leader. In 1983 he left Congress and joined great MGR. In 1989, he back stabbed NTR and became CM himself: Shri @AmitShah pic.twitter.com/ADah8iFyFW

In the last five years, the govt has given 20 big institutions and 11 new educational institution to Andhra Pradesh: BJP president Amit Shah.

Andhra Pradesh Reorganization Act had 14 main points which was supposed to be completed in 10 yeas. In just five years, completed 11 of them, helping the development of Andhra Pradesh: Amit Shah

UP CM Yogi Adityanath: And with whose support they want to win elections in Kerala. Congress is fighting in alliance with Muslim League in Kerala, the same Muslim League that became the reason of country's partition.

Here is the list of top leaders who contested elections from more than 1 seat.

BSP chief Mayawati accused the BJP of portraying Prime Minister Narendra Modi as India and India as Modi and said it was repeating the same mistake which the Congress did in Indira Gandhi's rule. 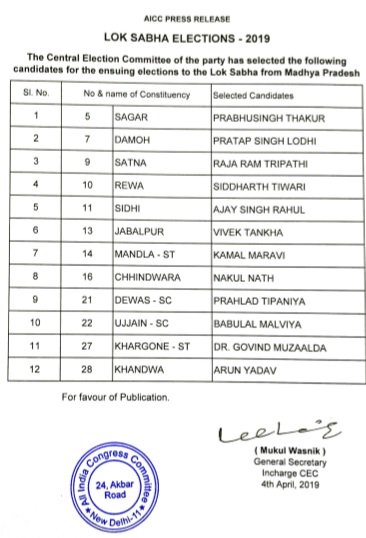 Why will people watch your film? If people want to watch films they will watch films on Gandhi Ji, Ambedkar Ji, why Modi? What contribution he has made to India?: Mamata Banerjee in Cooch Behar. 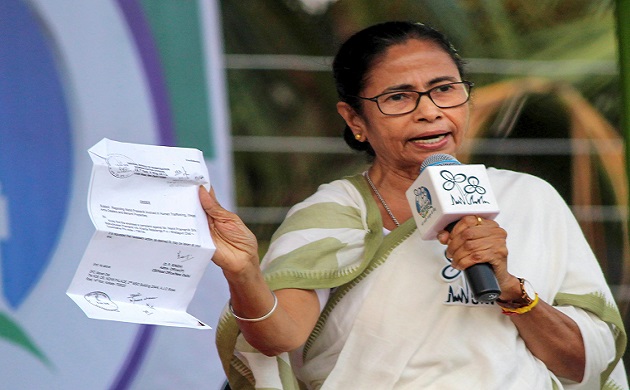 We will never allow NRC in Bengal; Modi is no one to decide who will stay and who will leave: West Bengal Chief Minister Mamata Banerjee in Cooch Behar.

Chaiwallah, who failed to fulfil promises, has now turned into a chowkidar to fool masses: Mamata Banerjee in Cooch Behar.

It was the Bengal government and not the Modi government which solved the issue of enclave transfer with Bangladesh: West Bengal Chief Minister Mamata Banerjee at Cooch Behar.

"My brother, my truest friend, and by far the most courageous man I know. Take care of him Wayanad, he won't let you down," tweets Priyanka Gandhi Vadra after her brother Rahul Gandhi filed nomination in Wayanad.

Wayanad: Three journalists, including ANI reporter, sustained minor injuries after a barricade in Rahul Gandhi's roadshow broke. The injured were helped to the ambulance by Rahul Gandhi.

Wayanad: Three journalists, including ANI reporter, sustained minor injuries after a barricade in Rahul Gandhi's roadshow broke. The injured were helped to the ambulance by Rahul Gandhi. #Kerala pic.twitter.com/JviwAgWX5h

I am not going to say a word against the CPM in my entire campaign, says Rahul Gandhi in Wayanad.

Rahul Gandhi in Wayanad: I have come to Kerala to send a message that India is one, be it North, South, East or West. My aim is to send a message, there is a feeling in South India that the way Centre, Modi ji and RSS are working its like an assault on culture and languages in South. 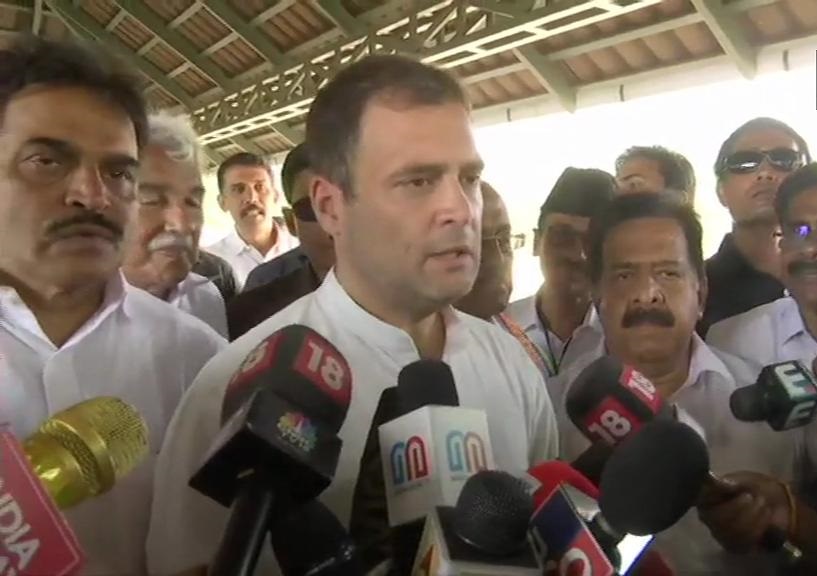 PM had cheated the country on the issue of corruption, says Rahul Gandhi.

"I want to give out a message by contesting from both north and south India," says Rahul Gandhi after filing of nomination from Wayanad.

I am very happy to share the new music video “Maa, Mati, Manush” for the forthcoming #LokSabhaElections2019

Reports also suggest just Praveen Kumar Nishad could be given a ticket from Bhadoi.

Ananda Bhaskar Rapolu, who was a Congress MP in the Rajya Sabha, has joined the BJP. 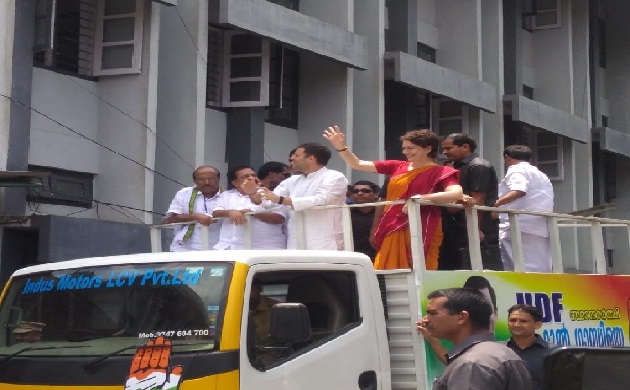 Rahul Gandhi and Priyanka Gandhi Vadra at the former's filing of nomination.

Nishad Party leader Praveen Kumar Nishad, who is an MP from Gorakhpur on the Samajwadi Party symbol from Yogi Adityanath's bastion, is most likely to join the BJP today. He is also likely to contest from the Gorakhpur seat on a BJP ticket.

Bharatiya Janata Party names HS Patel as its candidate from the parliamentary constituency of Ahmedabad East in Gujarat.

The Congress on Thursday announced the names of two candidates for Lok Sabha polls in Gujarat, taking the total number of seats on which, it has declared its candidates to 357. The party has fielded Sher Khan Abdul Shakur Pathan from Bharuch and Babubhai Katara from Dahod (ST). 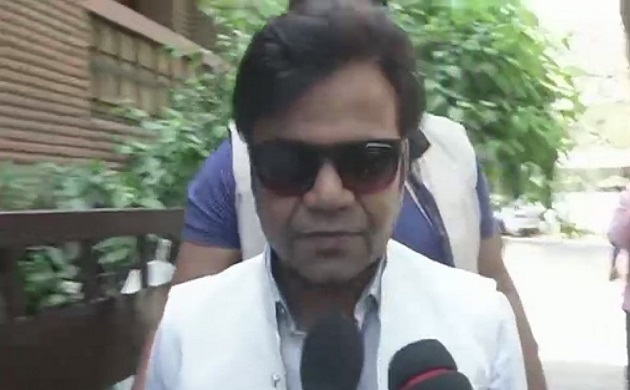 Shiv Sena chief Uddhav Thackeray has said views of locals will be taken into account while undertaking development projects in the tribal-dominated Palghar district of Maharashtra.

Supreme Court refuses to hear a plea seeking the postponement of the scheduled Lok Sabha poll date of April 18 in Tamil Nadu and Puducherry due to Easter festivities.

The Congress has announced that Babubhai Katara will contest from Dahod and Sherkhan Pathan to contest from Bharuch in Gujarat.

BJP MLA Narendra Mehta has lodged a complaint with Thane police against an unidentified person for allegedly creating a fake account on a social media platform in his name and posting objectionable messages on it.

Supreme Court agrees to hear on April 8, the plea of Congress leader seeking a stay on the release of the biopic on PM Narendra Modi.

Hanuman Beniwal's RLP joins hands with BJP in Rajasthan, to contest from Nagaur.

The body of former JD-U leader's son was found in Siwan after he was abducted on Wednesday evening.

He enjoyed a position of power for 15 years because of the support from Amethi, but now he is going to file nomination from elsewhere.This is an insult of Amethi and people here will not tolerate this: @smritiirani on Congress president @RahulGandhi

Union Minister Smriti Irani on Congress President Rahul Gandhi: He enjoyed a position of power for 15 years because of the support from Amethi, but now he is going to file nomination from elsewhere. This is an insult of Amethi and people here will not tolerate this.

Uttarakhand: Election Commission organized an EVM and VVPAT training camp in Haldwani for officers who would be on duty at polling booths.

Uttarakhand: Election Commission organized an EVM and VVPAT training camp in Haldwani for officers who would be on duty at polling booths (3.4.19) pic.twitter.com/tZD30HJy0A

BJP president Amit Shah will address rallies in Telangana and Andhra Pradesh. He will hold a road show in Visakhapatnam from Urvashi Junction to  Kancharapalem Mettu.

Rahul Gandhi will embark on a road show accompanied by his sister and AICC general secretary Priyanka Gandhi Vadra.

Congress president Rahul Gandhi will file his nomination from Wayanad in Kerala today.