Prime Minister Narendra Modi will address election rallies in Arunachal Pradesh, West Bengal and Maharashtra. Congress president Rahul Gandhi, fighting to regain his party’s lost foothold in the northeast, will hit the campaign trail in Assam on April 3 and 4. The two rallies he will address on the first day of his visit are in Kaliabor and Lakhimpur constituencies.

Election Commission issues notice to Uttar Pradesh Chief Minister Yogi Adityanath over his 'Modi ki sena' remarks, made during a speech. The Commission has asked him to file a reply by April 5.

Every Yadav believes today they aren't 'Akhilesh bhakt' just because they are a Yadav, they're 'Desh bhakt'. We've thoughts of our own, we know what's in interest of the nation. We'll have to rise above caste politics, people are understanding that, says Dinesh Lal Yadav 'Nirhua'.

Centre files an affidavit before the Supreme Court saying Electoral Bonds is a positive step in the right direction to ensure “accountability and transparency” in conducting elections and these bonds were introduced to deal with corruption in elections.

Congress releases new list of six canidates for the upcoming Lok Sabha elections. All six are names for Gujarat. The party has fielded Leader of Opposition in the Gujarat Assembly Paresh Dhanani from Amreli.

Will you give chance to those who seek to scrap sedition law, asks PM Modi.

These ‘mahamilavati’ people are abusing the ‘chowkidar’ in frustration of losing their political identity. They have more problem with my name than my work. First, they had issues with my ‘chai wala’ history now they have problems with ‘chowkidar’, says PM Modi.

If by mistake these 'Mahamilavti' people get power then naxals will get a big boost. Congress has already promised in manifesto that sedition case will not be imposed on any urban naxal, they have promised to do away with sedition law, says PM Modi in Gondia, Maharashtra.

Some sitting in AC rooms in Delhi are saying 'its been long, people are now forgetting Balakot strike'. You tell me, have you forgotten? We have still not forgotten 1962 war, how will we forget Balakot? says PM Modi.

Congress party releases list of 1 candidate in Odisha for #LokSabhaElections2019 and 9 candidates for elections to the Odisha state legislative assembly. pic.twitter.com/onxlg0nsoN

I am telling you that we left the Jammu and Kashmir government on the issue of dilution of AFSPA, says Amit Shah.

Nobody can dilute AFSPA as the BJP will be standing like a rock behind security forces who are protecting our borders, says Amit Shah.

"I am not Modi, I don't tell lies," says Mamata at a poll rally
claiming the PM has made false claims on performance of TMC government in West Bengal.

Mamata describes Prime Minister Narendra Modi as "Expiry
Babu". Dares him to participate in direct debate with her.

If single bullet comes (from Pakistan), we will fire shells from here, says Amit Shah.

Nobody can dilute AFSPA, BJP government will be standing like rock in support of security forces, Amit Shah says as he lambasts Congress.

Our forces had the courage to carry out air and surgical strikes. The only thing the country lacked was a resolute govt, says PM Modi.

In their manifesto, the Congress has stated that they will dilute AFSPA. This move will help Pakistan sponsored terrorist. The Congress is determined to bring instability in the country, says PM Modi.

Congress wants to weaken the forces, they want to compromise the national security, says PM Modi.

If providing home and toilets to poor is a crime, then I have committed this crime, says PM Modi in Kolkata.

Have you seen a chowkidar in front of farmers and workers' houses? Scores of chowkidars are there at houses of Anil Ambani and Gautam Adani, says Rahul Gandhi in Lakhimpur.

BJP releases 16th list of 6 candidates in Maharashtra and Uttar Pradesh for #LokSabhaElections2019 . Manoj Kotak to contest from Mumbai North East (where Kirit Somaiya is the sitting MP), Dinesh Lal Yadav 'Nirhua' to contest from Azamgarh (UP) against SP's Akhilesh Yadav. pic.twitter.com/uQvwJpGRSl

Congress calls itself the 'first family' of India. They should be the role model, are they the role model for the country, says Arun Jaitley, slamming Rahul Gandhi and the Congress.

Mamata Banerjee was initially scheduled to kick off her poll campaign from April 4 but it was advanced by a day in a plan not to cede even an inch to the BJP, as PM Modi is holding two rallies in the state today.

Congress, if voted to power, will not allow Citizenship Amendment Bill, says Rahul Gandhi in Assam.

We had given Assam special status but the BJP snatched it away. If we come to power, we will once again give Assam the special status, says Rahul Gandhi.

Earlier the slogan was 'Acche Din' but now it is, 'Chowkidar Chor Hai', says Rahul Gandhi, adding that money for NYAY will come from the pockets of all the businessmen they shielded.

Rahul Gandhi is addressing a rally in Assam's Golaghat. "While BJP made you stand in serpentine queues for your own money with draconian policies like demonetisation, we will bring you justice with NYAY and provided minimum income support of Rs 12,000 for all poor families of the country," he says.

The BJP candidate from Anand Lok Sabha seat in Gujarat, Mitesh Patel, has declared in his poll affidavit that he was an accused in a case related to the 2002 post-Godhra riots.

BJP candidate for the south Kashmir seat Sofi Mohammad Yousuf has already filed his nomination papers. Two independent candidates have also filed their nominations since the Election Commission issued notification for the third phase of polls on March 28.

The BJP candidate from Anand Lok Sabha seat in Gujarat, Mitesh Patel, has declared in his poll affidavit that he was an accused in a case related to the 2002 post-Godhra riots.

NCP's aggressive face and MLA Jitendra Awhad has been appointed as general secretary of the party in the run-up to Lok Sabha elections which his party is fighting in alliance with the Congress against the BJP-ShivSena combine.

Vivek Oberoi: I don't understand why some people are overreacting like this. Why are such senior and famous lawyers like Abhishek Singhvi ji and Kapil Sibal ji wasting time on filing a PIL on such a modest film? Don't know if they are scared of the film or of Chowkidar's 'danda'.

"Yesterday, Congress party released its manifesto in which promised to scrap sedition law from the CRPC. I want to ask them, who do you want to save? I want to tell the Congress chief - Don't play with country's security for vote bank politics," Shah.

"Omar Abdullah says Jammu and Kashmir should have a different prime minister. Recently, one of their leaders chanted "Pakistan Zindabad" slogans. Congress is silent on these things. Rahul Gandhi should clarify whether he stands with these people," says Amit Shah.

"The manifesto of Congress party will promote terrorism in the country. It sympathises with separatists and Naxals," alleges Union Defence Minister Nirmala Sitharaman.

Sanjay Raut on Election Commission notice to him on his article in 'Saamana', violating the mode code of conduct: I've got a notice from EC. Our stand is clear, those who have sedition charges against them should be stopped from going to the parliament at any cost. Hasn't Hardik Patel been stopped?

Samajwadi Party leader and Akhilesh Yadav's wife Dimple Yadav to file her nomination on April 6. She is contesting the Lok Sabha elections from Kanauj.

Supreme Court disposes off petition of two Gorkha Janmukti Morcha (GJM) leaders Roshan Giri and Bimal Gurung seeking a direction to grant them interim protection for three weeks to allow them to participate in the general elections.

To protect and develop Arunachal Pradesh, you need to ensure that NDA forms govt in the centre: PM Modi.

In their 2004 manifesto, Congress stated that every house would have electricity by 2009. However, till 2014 around 18,000 houses were unelectrified: PM Modi in Arunachal Pradesh.

In another incident, ex-Congress MLA Imran Masood was booked for a poll code violation on a complaint by sector magistrate Dharmender. Masood is also accused of making objectionable statements against PM Modi during an election meeting of the Congress.

A case was registered against BJP’s Shamli MLA Tejendra Nirwal for making objectionable remarks during a rally in Uttar Pradesh.

Just like them, their manifesto is corrupt and full of lies. Therefore, it should be called hypocrisy document, not a manifesto: PM Modi

We never committed sin of betraying farmers but we introduced mechanism from seed to market. Besides, we implemented PM KISAN scheme: PM Modi

On the one hand, you've people who insult your culture and on the other, you've a Chowkidaar who accepts your culture as his own: PM Modi

I'm a person who challenges every challenge. If I take up a task, I ensure it's completed in time. It's with your love and blessings that I'm able to work day and night for the people of the country: PM 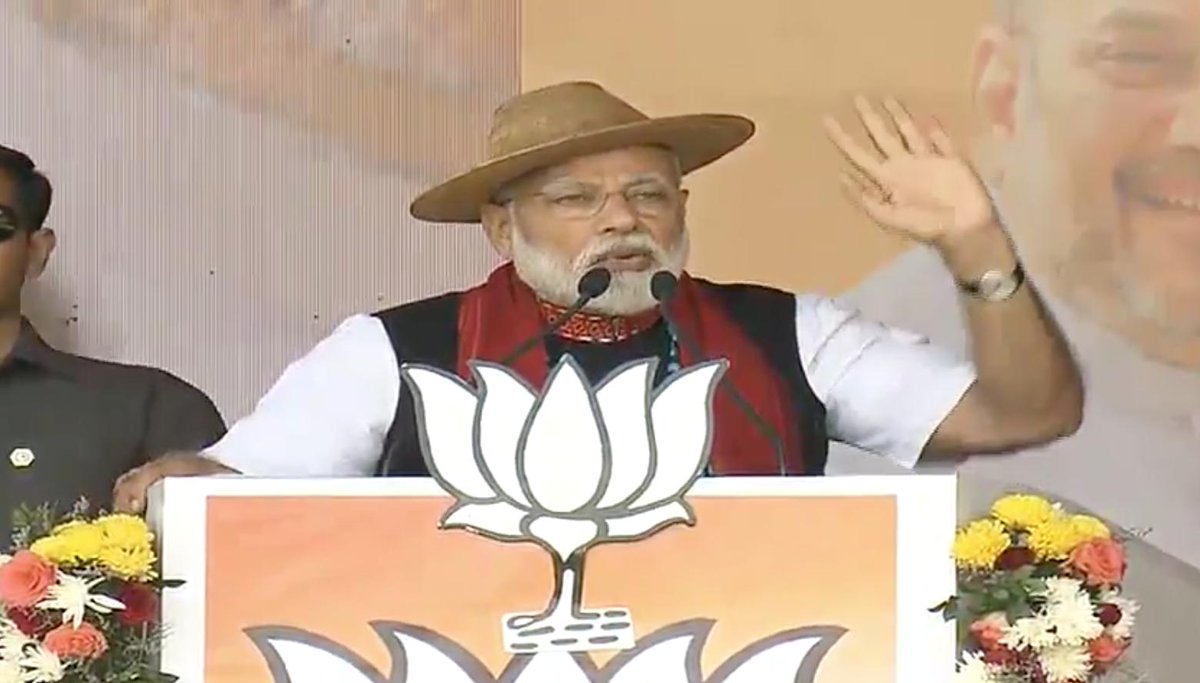 I came here in 2014 and this place was field. In no time, it became a splendid stadium. Now, good players of football will emerge from Pasighat: PM

Every house in Arunachal Pradesh has been illuminated with electricity after 70 years of independence: PM

There are plans to make Itanagar and Pasighat Smart Cities: PM Modi.

It is with the support of the people of Arunachal Pradesh that we have been able to develop roads, national highway, railway and improve air connectivity of the state with the rest of the nation. It is the result of your strong trust on us, says PM Modi in Pasighat.

Are you happy with your 'Chowkidar'? asks PM Modi in Arunachal Pradesh's Pasighat.

Congress MLA Pawan Kajal will take on BJP minister Kishan Kapoor from Kangra constituency in Himachal Pradesh in the upcoming Lok Sabha polls. The Congress Election Committee has so far announced candidates for three out of the total four Lok Sabha seats in the state.

Election Commission Flying Squad officials have seized Rs 2.10 crore in cash near Perambalur, Tamil Nadu from a former VCK party district secretary during vehicle checks. The cash was concealed inside the car doors.

Election Commission Flying Squad officials have seized Rs 2.10 crore in cash near Perambalur, Tamil Nadu from a former VCK party district secretary during vehicle checks. The cash was concealed inside the car doors.#ElectionsWithNewsNation

Mumbai Congress President Milind Deora said in Mumbai on Tuesday, says, "Shiv Sena has been against the minorities. A few years ago, the party insulted Jain religion by cooking meat outside Jain temples during Paryushana festival. Remember, you have to teach them a lesson through your votes."

Man injured after a bottle was thrown during BJP State vice-president Nainar Nagendran's election campaign in Periyapattinam on 01 April for the upcoming Lok Sabha polls. He is contesting polls from Ramanathapuram parliamentary constituency.

Man injured after a bottle was thrown during BJP State vice-president Nainar Nagendran's election campaign in Periyapattinam on 01 April for the upcoming Lok Sabha polls. He is contesting polls from Ramanathapuram parliamentary constituency.

Umesh Sinha expressed satisfaction on arrangements being made in Telangana for Lok Sabha Elections 2019 and said the state will create history by conducting polls with 185 candidates with EVMs, as more than 4 ballot units will be used in the constituency for the first time.

A team of officials of Election Commission of India led by Senior Deputy Election Commissioner Umesh Sinha held a series of meetings with Chief Electoral Officer of Telangana, Dr Rajat Kumar, DEOs and the election-related authorities on April 1 and 2 in Hyderabad.

Congress president Rahul Gandhi, fighting to regain his party’s lost foothold in the northeast, will hit the campaign trail in Assam on April 3 and 4. The two rallies he will address on the first day of his visit are in Kaliabor and Lakhimpur constituencies.