Get All The Scoop On Elections Here

Prime Minister Narendra Modi will address election rallies in Bihar, Uttar Pradesh. Congress president Rahul Gandhi will hold three public meetings in Madhya Pradesh. The first meeting is at Jatara in the Tikamgarh district , the second at Amanganj in Khajuraho and the third at Pathariya in Damoh. Get all the scoop on elections here:

BJP is spending extensively. We do not have money power like them They are spending crores on every public meeting. They have hired agencies to even put up flags and banners. They've been hired to bring crowds to Modi’s rallies in exchange for money: Mamata Banerjee

Narendra Modi hasn't done any work in last 5 yrs and has no achievements to show. Hence, he's trying to divide people on religious lines, hoping that would get him votes. Look at the money spent by BJP for campaigning. In future, democracy will be in danger if this continues: PM Modi

Election Commission: In matter related to a complaint concerning alleged violation of Model Code of Conduct in a speech by PM Narendra Modi in Wardha, Maharashtra on 01.04.2019, Commission is of the considered view that in this matter no such violation has been noticed.

EC has given approval to West Bengal CEO to put mark of inedible ink on voter's left middle finger for by-election to State Legislative Assembly. If any re-poll is announced at any polling station of the 6 Assembly segments, mark should be put on voter's left ring finger. pic.twitter.com/ZYoidsWwvU

Many in Mahamilavati gang may not win enough seats to help their bigwigs become leader of the oppn, but they are dreaming of PMs post: PM Modi

If oppn parties regain strength, days of lawlessness will be back in Bihar, says PM Modi.

Those people who till a few days ago were playing "Kaun Banega Pradhan Mantri" with each other, are now playing hide and seek after the 4th phase of voting concluded....Ab janta ne inke saare sapno ko chaar charan mein choor choor kar diya hai: PM Modi in Barabanki.

Prime Minister Narendra Modi will address a poll rally Wednesday at Itarsi town which is part of the Hoshangabad Lok Sabha seat.

Supreme Court says EC is free to pass orders on complaint of Congress MP Sushmita Dev against top leaders; fixes her plea for hearing on Thursday.

Farmers won't be jailed if they fail to pay debts: Rahul Gandhi in Madhya Pradesh.

Odisha CM Naveen Patnaik: I am in Delhi to meet the Election Commission of India regarding the by elections of Patkura Assembly seat, that it should be postponed in case the cyclone hits Odisha.

Union Home Minister Rajnath Singh on MHA notice to Congress President Rahul Gandhi over citizenship: When a member of Parliament writes to any ministry, action required on their query is taken. It is not a big development, it is normal process.

It is not just a wave, it is a challenge: PM Modi.

After four phases of polling, some people already feel defeated. Now after the rest of the phases, it is to be seen how huge is their defeat and how huge is the NDA-BJP's win, says PM Modi in Muzaffarpur.

PM Modi is addressing a public meeting at Muzaffarpur in Bihar.

Congress releases list of star campaigners for Lok Sabha Elections 2019 to be held on May 19 in Punjab and Chandigarh. 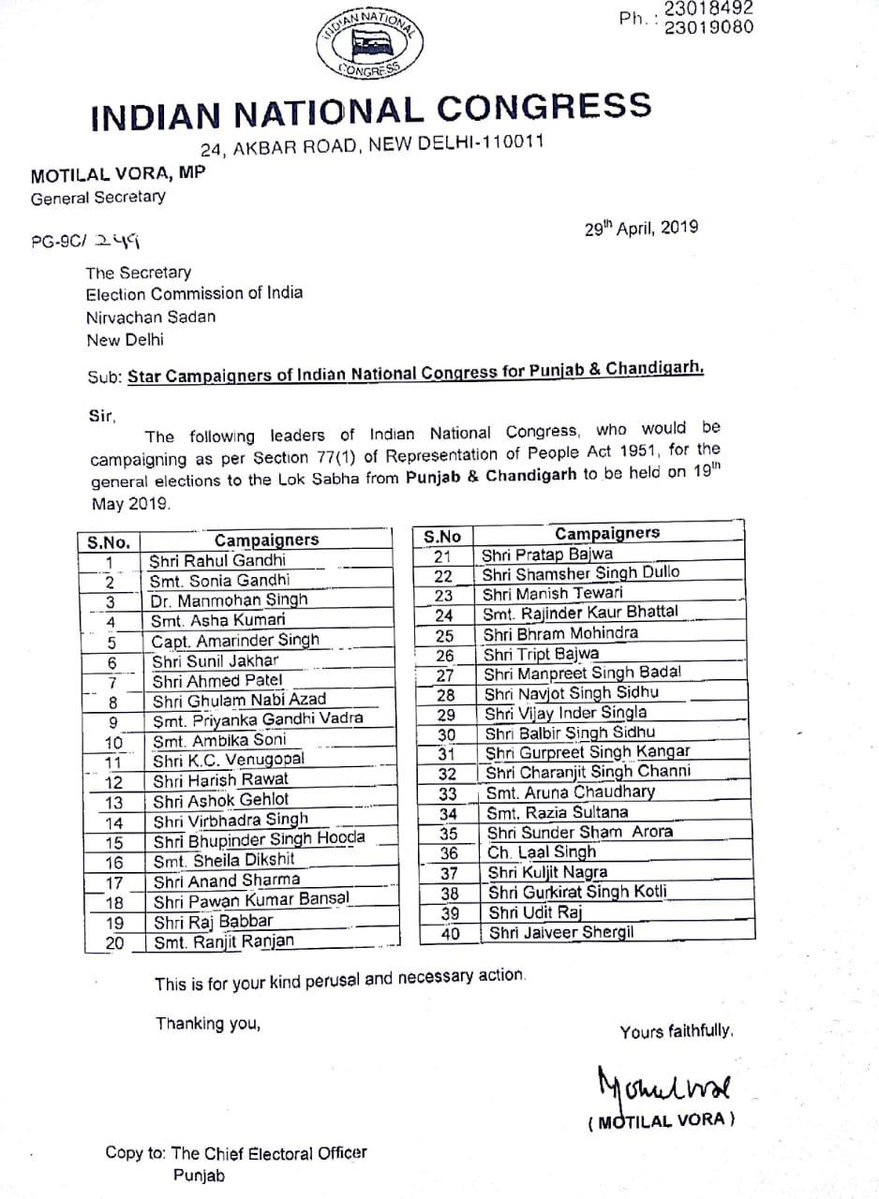 The first meeting is at Jatara in the Tikamgarh district , the second at Amanganj in Khajuraho and the third at Pathariya in Damoh.