It Is Believed That The Party Has Already Shortlisted The Candidates For The Lok Sabha Polls.

The Bharatiya Janata Party is likely to release much-awaited first list of candidates for the upcoming Lok Sabha elections today. The party was scheduled to announce the names on Monday but the development was postponed in view of the last rites ceremony of late Goa CM Manohar Parrikar.

It is believed that the party has already shortlisted the candidates for the Lok Sabha polls and the names would be released soon. The BJP Central Election Committee is likely to first release the list of candidates for seats where elections will be held in first two phases. A total of 188 seats will go to polls in the first two phases on April 11 and 18.

The elections to constitute the 17th Lok Sabha will begin from April 11 and culminate on May 19. Results will be declared on May 23. The tenure of 16th Lok Sabha ends on June 3.

Rahul Gandhi in Itanagar, Arunachal Pradesh: We have decided, as soon as we form the government in 2019 we will remove the Gabbar Singh Tax and give you the GST. pic.twitter.com/cdJK5Kdi6X

Arunachal Pradesh has a special place in the heart of the Congress party, says Rahul Gandhi at Itanagar rally.

Congress will not allow the Citizenship Amendment Bill to be passed in the Rajya Sabha, says Rahul Gandhi.

Congress will restore special category status to
Arunachal Pradesh and other NE states if voted to power, says Rahul Gandhi at Itanagar rally.

Prime Minister, on 30th March, will interact through video conference with people who have pledged their support to 'Main bhi Chowkidaar' movement, from 500 locations in the country, says Ravi Shankar Prasad.

Rashtriya Lok Dal (RLD) releases list of candidates for the upcoming Lok Sabha elections. Chaudhary Ajit Singh to contest from Muzaffarnagar, Jayant Chaudhary from Baghpat and Narendra Singh from Mathura. RLD is in alliance with BSP and SP in Uttar Pradesh.

Negotiations between Congress and the National Conference reached a dead-end after the latter made it a precondition to contest all three seats in the Kashmir valley in exchange for the party's support to the Congress in the two seats in Jammu and one in Ladakh.

At a time when the BJP is pushing its 'MainbhiChowkidar' campaign, BJP leader and Haryana Minister Anil Vij targeted the Congress, saying they should add 'Pappu' as a prefix to their names.

Aam Aadmi Party (AAP)'s Gopal Rai said no alliance with Congress. Also said that even if the Congress approaches them now, there would be no alliance.

The Lok Sabha polls should be fought on ‘perennial issues’ like poverty and disease and not on a ‘tragedy of one moment’, says Congress leader Shashi Tharoor while accusing the BJP-led government of trying to turn the 2019 vote into a ‘khaki election’ after the Pulwama attack. The momentum was with the Congress when the Pulwama tragedy struck on February 14, killing 40 CRPF soldiers, Tharoor said, hitting out at the government for trying to make the upcoming Lok Sabha polls a “national security based election”.

"After BJP launch 'Mai Bhi Chowkidar' campaign, PM Modi & others added the prefix 'Chowkidar' to their Twitter handles. So now Narendra Modi is Chowkidar & no more a 'Chaiwala' which he was at the time of last LS election. What a change India is witnessing under BJP rule. Bravo!" tweets Mayawati

AIADMK in its election manifesto: AIADMK will urge the Government of India and the President to give due direction to the Governor of Tamil Nadu for release of the seven Tamil convicts as ordered by Supreme Court and approved by the Cabinet of Tamil Nadu government.

A complaint has been filed against Union Minister Babul Supriyo on Tuesday for his "derogatory" comments on the Trinamool Congress (TMC). The TMC, in its complaint, said that the BJP's poll song for West Bengal has damaged the reputation of the TMC.

'What did they do in 70 years?' argument also has an expiry date. Now they (BJP) should tell what they have done in their five years when they are in power,' says Priyanka Gandhi.

Congress ruled the state for the maximum time period after independence, and in return the party gave the state designation of a 'BIMARU' state, says Yogi Adityanath on UP government completing two years.

Not a single riot in UP after BJP came to power, says Adityanath on UP government completing two years.

The Dravida Munnetra Kazhagam (DMK) party in Tamil Nadu has released its manifesto for the upcoming Lok Sabha elections. In its manifesto, the DMK stated that efforts will be taken to release all the seven convicts in the Rajiv Gandhi case; all Sri Lankan refugees will be given citizenship; South Indian rivers will be connected. Abolition of NEET and waiver of education loans have found place in the DMK manifesto. 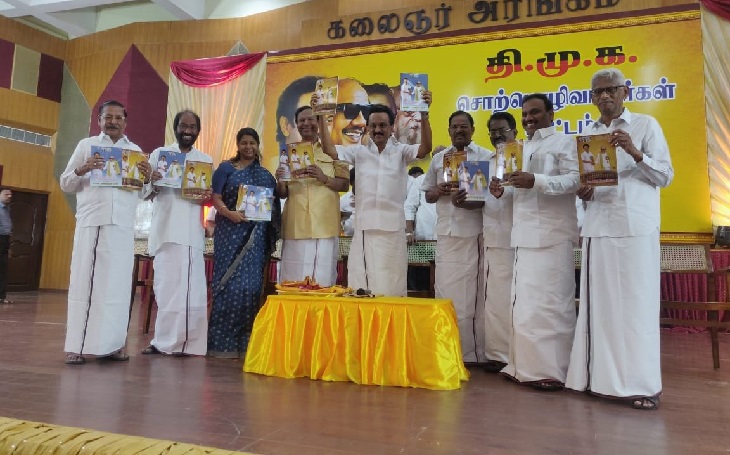 On 'Main bhi Chowkidaar' campiagn: The BJP is using this slogan to hide their own thefts. No need to pay heed to this, said Kharge.

On grand alliance, Kharge said: Alliance talks are on in West Bengal, Bihar. But the problem is that smaller parties are asking for a bigger seat share. Congress chief Rahul Gandhi is himself trying to do the alliance talks.

K Chandrashekar Rao is doing criminal politics. He is grabbing the MLAs of Congress and TDP. Bihari dacoit Prasant Kishore has removed lakhs of votes in Andhra Pradesh, Chandrababu Naidu said on Monday.

Congress leader Mallikarjun Kharge said that today's CEC meet was to discuss candidates for Maharashtra. There could be an announcement in the evening.

As many as eight Congress MLAs defect TRS in Telangana, according to News 18.

This is the revised schedule for Priyanka Gandhi Vadra's second-day visit to Uttar Pradesh: 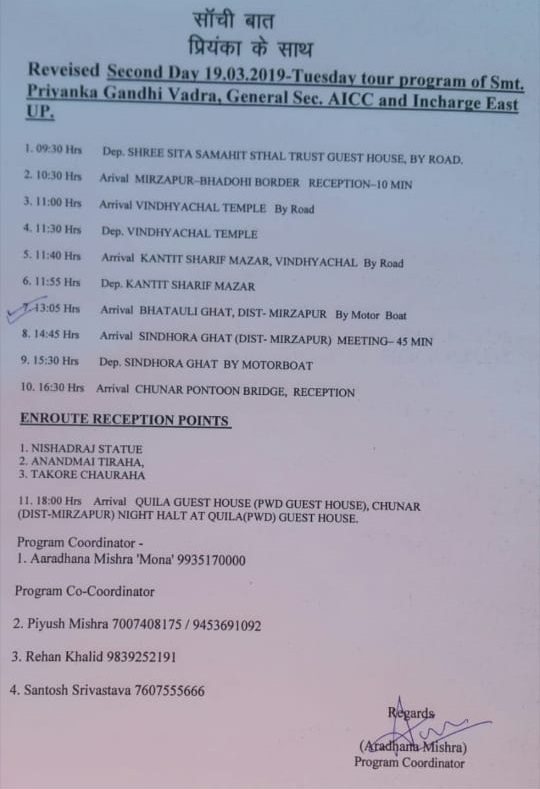 The Election Commission to meet social media representatives today to discuss various social media content, especially after Model Code of Conduct came into force ahead of the Lok Sabha elections.

Our president Rahul Gandhi will take decision in few days, time and the policy of our party as decided by working committee is to go for alliance with the parties who are opposed to BJP. I hope Delhi leaders will also follow this policy decision of the Congress, says PC Chacko

As far as I know there are senior leaders in Delhi who think that defeating BJP is party's immediate responsibility; for it we should form alliance with AAP, that's the thinking of majority of leaders, says PC Chacko on party leaders writing to Rahul Gandhi over alliance with AAP.

Ahead of Lok Sabha polls, the Andhra Pradesh police conducted flag march to advocate for free and fair elections.

Jana Sena Party (JSP) has released the third list of candidates for 13 Assembly and one Lok Sabha seat in Andhra Pradesh.

BJP Central Election Committee likely to meet today, may announce candidates for some of the seats.

Andhra Pradesh: Telugu Desam Party (TDP) releases third list of 36 candidates for the upcoming elections to the state legislative assembly. The polling will be held on 11 April. Read more here 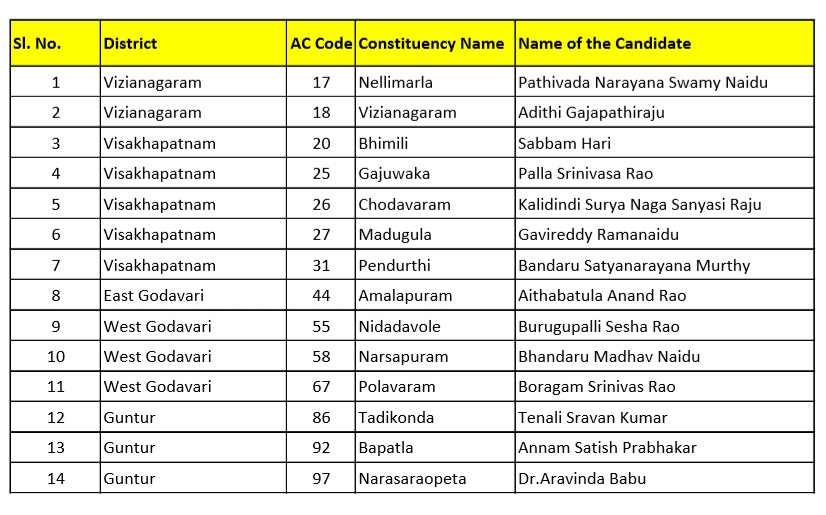 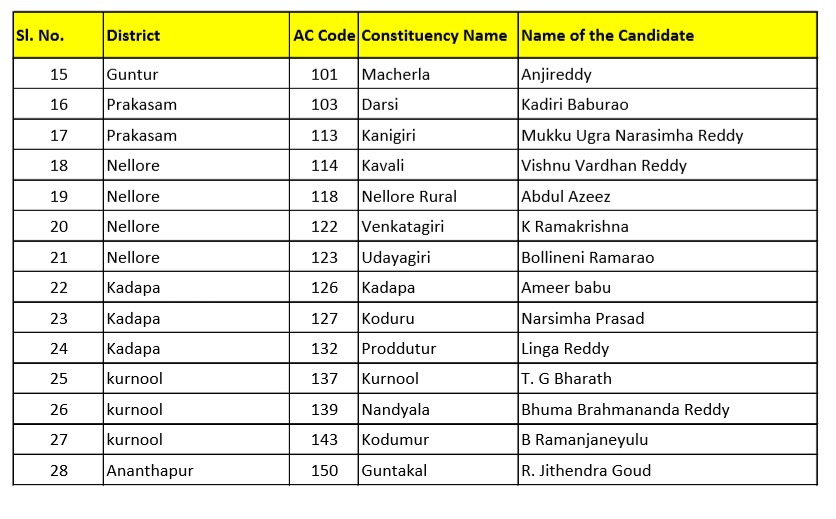