Modi is flummoxed as BJP heading for defeat: Rahul Gandhi at Chandigarh rally

Get All The Scoop On Elections Here.

Get all the LIVE updates on the Lok Sabha Polls 2019 here:

Election Commission on statements against PM Modi by Navjot Singh Sidhu in a speech on 29 April in Bhopal: EC has decided to provide opportunity to Navjot Singh Sidhu to submit his explanation, within 24 hrs, failing which EC shall take a decision without further reference to him.

Modi is flummoxed as BJP heading for defeat: Rahul Gandhi at Chandigarh rally.

PM Modi in Hoshiarpur, Punjab: Congress has one more stain on it which can never be cleaned. Can Punjab ever forget 1984? Who is responsible for what happened then? For three decades injustice was meted out to my Sikh brothers and sisters, and now Congress has said 'hua to hua.'

It is with your blessings that India has developed in every sphere in the last 5 years: Prime Minister Narendra Modi.

17:35 (IST)
Facebook Twitter Whats app Linked In
Insulting the Army is a habit of the Congress. Whether it is the country's security or the Army's dignity, your chowkidar (watchman) is always alert: PM Modi at Mandi.

Congress did not provide our soldiers with bullet-proof jackets for so many years. They do not care about our soldiers. After our government was formed, we fulfilled this promise too: PM Modi.

I want to ask you all - people who plan to divide India and torture our soldiers, should not their bail applications be seized?: PM Modi.

This year too, after the Air strikes in February, the 'Naamdar' were busy blaming Modi, says the prime minister.

After 2016 Surgical Strike, you saw that the Congress started abusing me instead of Pakistan: PM Modi.

After Pulwama attack, there was resentment in entire Himachal. All you wanted was that the terrorists and their mastermind be punished. At that time, this chowkidar had honoured your emotions and allowed our brave soldiers to cross the border and take strong action against terrorists: PM Modi.

You should know about the kind of politics Congress party and these 'mahamilawati' people indulge in. They say that there should be talks with separatists, Sedition law should be scrapped, special powers to soldiers should be scrapped: PM Modi at Himachal's Mandi.

Modi may spread hatred against me, Indira Gandhi, Rajiv Gandhi. But I will repay with love: Rahul Gandhi at Una rally. 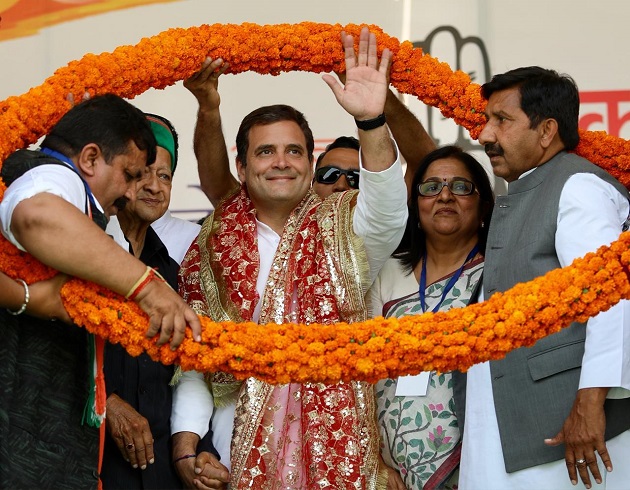 This is the mentality of BJP, even today BJP leaders are saying the same things that were written in the pamphlet. They have filed defamation case against us after defaming us. We are sending defamation notice to Gautam Gambhir today. We will not leave this matter, says Arvind Kejriwal.

Atishi is a highly educated and an accomplished woman. Her work has been great in the field of education which is being discussed worldwide. I don't understand why BJP can't tolerate achievements made by women: Kejriwal.

Delhi Chief Minister Arvind Kejriwal on post-poll alliance: We will support whoever will be forming the govt at the Centre except Modi ji and Amit Shah, on the promise that Delhi will be given statehood.

PM Modi on if action will be taken against Hafiz Saeed & Dawood Ibrahim like Masood Azahar, if BJP comes back to power: Don't take names of individuals, any threat to nation, be it by people or system, whether it's on land, sky or in space, BJP is bound to protect India and Indians.

Our only aim is to stop Modi and Shah from coming back to power, will support anyone other than duo after polls: AAP chief Kejriwal.

Arvind Kejriwal alleges Modi's nationalism fake and dangerous for country, says PM has not delivered anything.

PM Modi using armed forces to get votes as he doesn't have any work to show: Kejriwal.

Kejriwal says Congress acting as spoilsport, appears as if it's fighting polls against opposition parties and not BJP.

Congress harming SP-BSP in UP, Left in Kerala, TMC in West Bengal, TDP in Andhra and AAP in Delhi: Arvind Kejriwal to PTI.

Congress has betrayed the youth of Haryana, says PM Modi in Haryana's Rohtak.

The Khattar government has provided jobs to the youth, says PM Modi in Rohtak.

PM Modi in Rohtak, Haryana: 'Hua so hua'- the three words that sum up Congress's arrogance were uttered yesterday by one of its most senior leaders, he said this on 1984 anti-Sikh riots. This leader is one of the closest people to the Gandhi family.

"Having known @GautamGambhir for nearly 2 decades, I can vouch for his integrity, character and the respect he has for women," tweets former cricketer @VVSLaxman281

"Having known @GautamGambhir for nearly 2 decades, I can vouch for his integrity, character and the respect he has for women," tweets former cricketer @VVSLaxman281

Cricketer Harbhajan Singh on Friday termed controversary around BJP's East Delhi candidate Gautam Gambhir as shocking. Taking to micro blogging website Twitter, Harbhajan Singh wrote, I am shocked to note yesterday’s events involving  @GautamGambhir. I know him well and he can never talk ill for any woman. Whether he wins or loses is another matter but the man is above all this(sic).”

AAP East Delhi candidate Atishi: If BJP and Gautam Gambhir can do this with an empowered woman then how will he ensure security to rest of the women? We have filed a complaint with Delhi Commission of Women, we will soon file a complaint with the Election Commission and Delhi Police.

If BJP and Gautam Gambhir can do this with an empowered woman then how will he ensure security to rest of the women? We have filed a complaint with DCW, we will soon file a complaint with the EC and Delhi Police, says @AtishiAAP

West Bengal: One section of Central Reserve Police Force (CRPF) containing 8 personnel will be deployed at each booth in Naxal-prone Jhargram.

Former Karnataka CM & BJP leader BS Yeddyurappa: More than 20 Congress MLAs are not happy with the present government, they might take any decision at any time. Let us wait and see.

With two days left for Ghatal constituency to go to polls, the police has seized Rs 1.13 cash from the vehicle of BJP candidate Bharati Ghosh late Thursday night, a senior police officer said on Friday. The car in which the former IPS officer was travelling was intercepted at Mangal Bar in Pingla area in West Midnapore district at around 11 PM on Thursday, he said.

“Cash amounting to Rs 1,13,815 was seized from Ghosh’s vehicle. We had information that Ghosh was carrying the cash.  There were also other people in her vehicle. She could not explain why she was carrying the money. We are looking into the matter,” the police officer told PTI.

Delhi Deputy CM and Aam Aadmi Party leader, Manisha Sisodia on 'derogatory' remarks pamphlet against AAP's Atishi: We are being defamed and they (BJP) are saying they will file defamation against us? We are going to send defamation notice to them today.

1949: Idols of Ram Lalla placed under a central dome outside the disputed structure.

BJP twisting my words on anti-Sikh riots to hide their failures: Sam Pitroda.

Suresh, the man who slapped Delhi CM Arvind Kejriwal during a roadshow on 4th May: I don't know why I slapped him, I regret it. I'm not affiliated to any political party, nobody asked me to do this. Police did not misbehave with me, they only said what I did was wrong.

BJP East Delhi candidate, Gautam Gambhir on AAP candidate Atishi: I condemn what has happened. I am from a family where I have been taught to respect women. I didn't know CM Arvind Kejriwal would stoop so low. I have filed a defamation case.

Gautam Gambhir, BJP's East Delhi candidate: If they can get a proof, I'll resign right now & if they get a proof by 23rd I'll resign on that particular day. But if Arvind Kejriwal does not get the proof, does he accept the challenge that he will leave politics forever on 23rd?