PM Modi insulted my martyred father Rajiv Gandhi, but I have love for him: Rahul Gandhi

The Voting Will Take Place Between 7 Am And 6 Pm In Most Of The Constituencies To Decide The Fate Of Around 674 Candidates In 7 States.

The fifth phase of the Lok Sabha Elections is underway with over 9 crore voters exercising their franchise in 51 constituencies spread over seven states across India. The total polling percentage till 1 pm is 31.29. The states which are going to polls in round 5 are - Uttar Pradesh (14/80 seats), Rajasthan (12/25 seats), Madhya Pradesh (7/29 seats), West Bengal (7/42 seats), Bihar (5/40 seats), Jharkhand (4/14 seats) and Jammu and Kashmir (2/6 seats). With this phase, election will be over in 424 seats and polling in the remaining 118 seats will be held on May 12 and 19.

The voting will take place between 7 am and 6 pm in most of the constituencies to decide the fate of around 674 candidates in seven states all over the country. Voting will end at 4 pm in some parts of Jharkhand due to security reasons as some areas are affected by Left-Wing Extremism. The Election Comission has set up 94,000 polling stations/booths and made elaborate security arrangements.

Election Commission of India (ECI) has directed to transfer, Rajesh Duggal, IPS Commandant 3rd Battalion Haryana Armed Police, Hisar from the district of his present posting and be posted outside Hisar and Sirsa Parliament Constituency immediately.

We agreed to tie-up with AAP in Delhi, but Arvind Kejriwal did 'U' turn and also wanted to have alliance in Haryana, Punjab: Rahul Gandhi.

Narendra Modi insulted my martyred father Rajiv Gandhi, but I only have love for him: Rahul Gandhi.

Jaipur: Voting concludes for the 5th phase of Lok Sabha Election 2019 in Rajasthan.

59.15 per cent polling till 5 pm in 51 Lok Sabha constituencies across seven sttaes.

52.96 per cent voter turnout recorded till 5 pm in 5 Lok Sabha seats of Bihar. 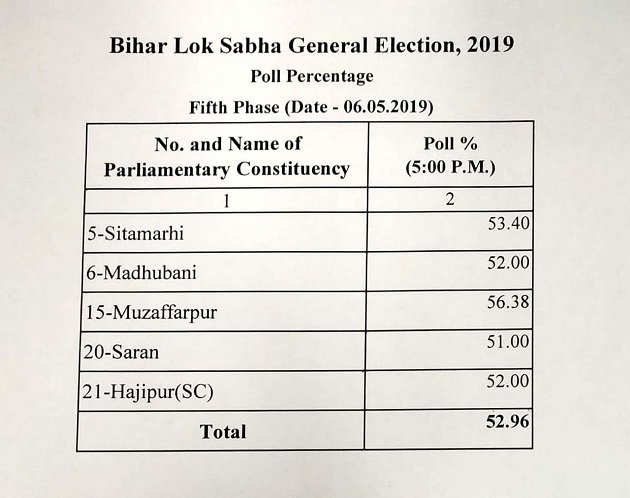 Jammu and Kashmir: Petrol bomb was hurled at a polling station in south Kashmir’s Shopian, today, no loss of life or injuries reported.

People standing in queues in different polling booths in and around Leh and Ladakh in Jammu and Kashmir. 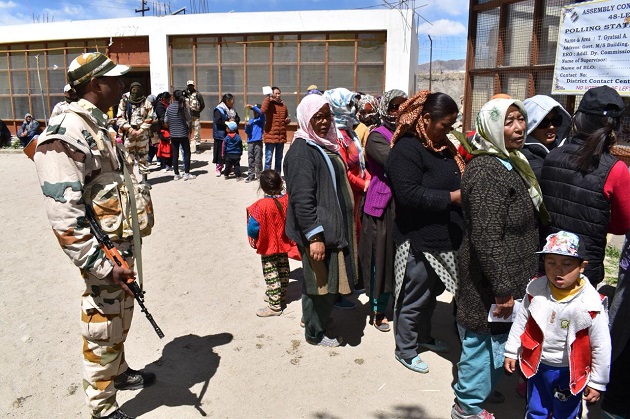 I don't want to share dais with expiry PM as elections are on: Mamata over not returning calls from PM Modi's office.

Could not take PM's call on cycone Fani as I was in Kharagpur: Mamata Banerjee

Prime Minister Narendra Modi in Jhargram, West Bengal: He (Sitaram Yechury) did not even respect the words in his name, 'Sita-Ram,' he insulted Ramayana and Mahabharata.

Sahara chief Subrata Roy casts his vote at a polling booth in Lucknow. 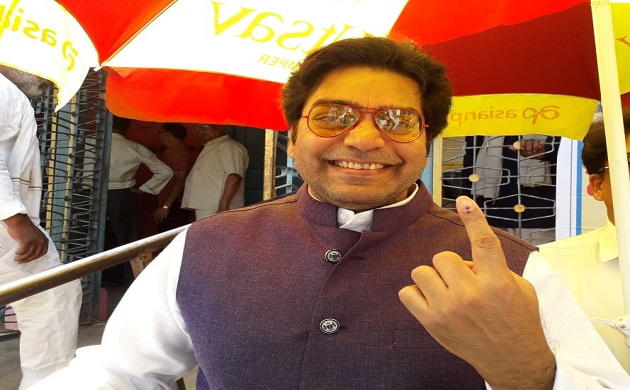 Another grenade lobbed at Chatpora Pulwama on a polling booth. No loss of life. It blasted outside the wall with no damage.

In West Bengal, people have to to pay Trinmool Tolabazi Tax. No one dared to challenge this tax and it only emboldened TMC. But now it won't last long in Bengal: PM Modi.

I want to assure the people of West Bengal that the central government is with you and will help the state government with relief: Prime Minister Narendra Modi.

Recently, Pakistan sponsored Masood Azhar was designated a global terrorist by the United Nation. It's a huge victory of India against the terrorist. It's a matter of pride for the country however, Didi failed to comment on this topic: PM Modi.

Speedbreaker Didi has tried to play politics even on cyclone Fani. I tried to get in touch with Mamata didi but her arrogance is such that she refused to talk to me, I tried again but she did not get in touch: PM Modi in West Bengal.

I tried speaking to CM Mamata Banerjee but she, out of her arrogance, did not speak to me. I hoped that she would call be back but she did not call. I called her again as I was worried about West Bengal but she refused: PM Modi.

I called her again and again because I was worried about the people of West Bengal but she refused me again: Prime Minister Narendra Modi.

People who hail Jai Shree Ram in Bengal are put behind the bars, Didi is so frustrated these days that she doesnt even want to talk or hear about god: PM Modi.

ECI removes presiding officer of a booth at Tarakeswar under Arambag Lok Sabha constituency after Trinamool leader, Maharaja Nag was caught on camera guiding voters on where to vote.

Madhya Pradesh: A man in Chhatarpur arrives to vote, after his father's last rites earlier today.

"I cannot believe that a man from Mahatma Gandhi's soil Gujarat could make such a comment on Rajiv Gandhi. He is shook because of the results of the elections till now. He promised jobs, smart cities, farmer income to be doubled, but failed to do so," Congress' overseas head Sam Pitroda said on Monday on PM Modi's comments over former PM Rajiv Gandhi.

BJP says they will meet the Election Commission later in the evening today to complain of fake voting and threatening of party workers.

Union Home Minister and the BJP candidate from Lucknow,  Rajnath Singh, said that the Mahagatbandhan is no challenge for the saffron party in his constituency. "I don't want to comment on her (SP-BSP-RLD candidate Poonam Sinha), as I believe elections are not about individuals but about issues," he said.

Bihar: One Ranjit Paswan arrested on charges of vandalizing an EVM machine at polling booth number 131 in Chhapra.

After casting her vote in lucknow in the fifth phase of the Lok Sabha elections, Bahujan Samaj Party supremo Mayawati urged the people to exercise their right to vote wisely. "Women should come out of their homes and vote. Your vote is precious," she said.

Jharkhand: Union Minister and BJP candidate from Hazaribagh, Jayant Sinha arrives at a polling booth to cast his vote. Sinha is contesting against Congress' Gopal Sahu & CPI's Bhubneshwar Prasad Mehta from the constituency.

Voter turnout till 9 am: 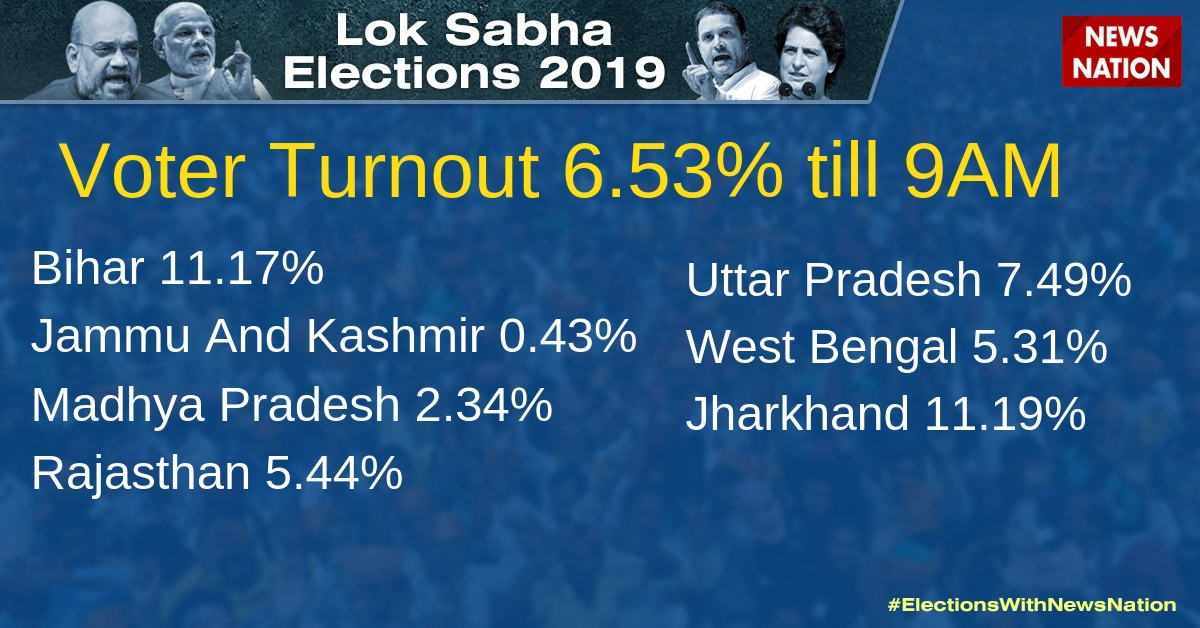 Jharkhand: A man arrived with his 105-year-old mother to cast votes at polling booth number 450 in Hazaribagh.

Smriti Irani,BJP candidate from Amethi on Priyanka Gandhi Vadra: She did not know my name 5 years back, now she keeps taking my name, such an accomplishment. Nowadays she takes her husband's name less and my name more.

Smriti Irani: A person died as he was denied treatment at hospital where Rahul Gandhi is trustee,in Amethi just because he had Ayushman Bharat card. 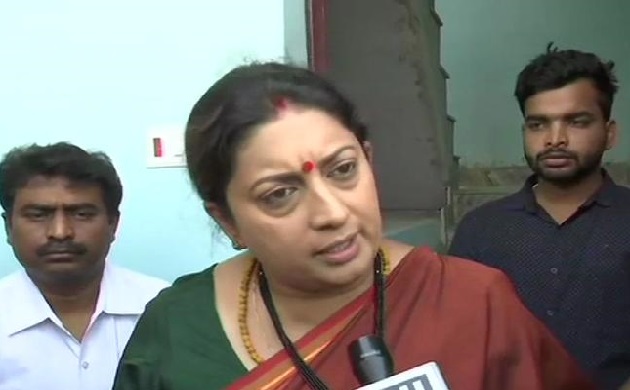 Jharkhand: Visuals from a polling booth in St.Anne's Girls High School in Ranchi. 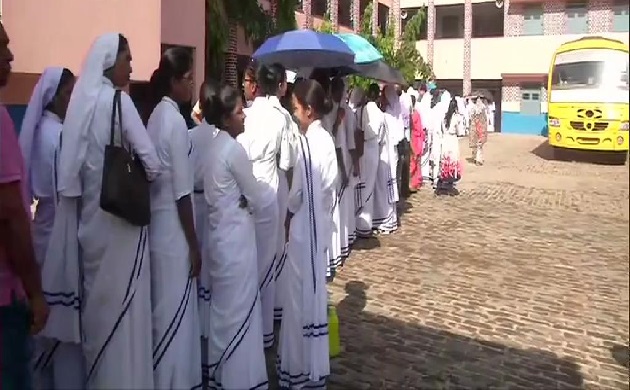 A grenade was lobbed at Rohmoo Polling Booth in Pulwama, South Kashmir. No loss of life or any damage.

The Phase 5 of the Lok Sabha Elections began on a violent note in West Bengal on Monday. Clashes broke out in Barrackpore, at outskirts of state capital Kolkata, within first hour of polling. BJP candidate Arjun Singh was injured during the scuffle. The BJP alleges that Singh was attacked by Trinamool Congress workers in Mohanpur area. The BJP camp was also attacked by unidentified men.

PM Modi has appealed voters to exercise their franchise and said, "A vote is the most effective way to enrich our democracy and contribute to India’s better future."

Requesting all those voting in today’s fifth phase of the 2019 Lok Sabha elections to do so in large numbers.

A vote is the most effective way to enrich our democracy and contribute to India’s better future.

I hope my young friends turnout in record numbers.

West Bengal: Voting yet to begin in booth numbers 289/ 291/292 in Howrah, reportedly after glitches in EVMs and VVPATs. Details awaited.

Union Minister Rajyavardhan Singh Rathore and his wife Gayatri Rathore arrive at a polling station in Jaipur to cast their votes:

#ElectionsWithNewsNation | Union Minister @Ra_THORe and his wife Gayatri Rathore arrive at a polling station in Jaipur, Rajasthan to cast their vote for #LokSabhaElections2019

Saran: Elderly man on a wheelchair brought to a polling booth in Chhapra:

Visuals from a polling booth in Jaipur:

Rajasthan: #Visuals from a polling booth in Jaipur. #LokSabhaElections2019 pic.twitter.com/zMs39NG9QA 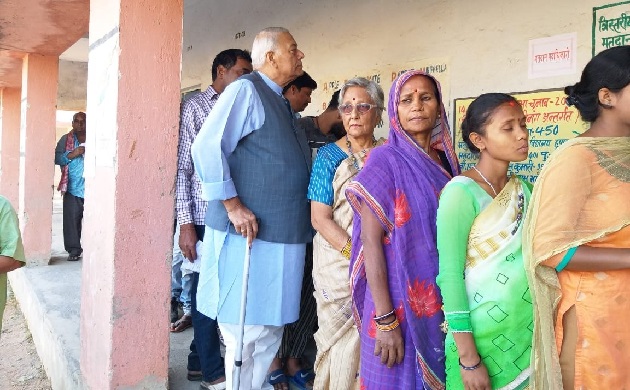 Visuals from a model polling booth in Saran: 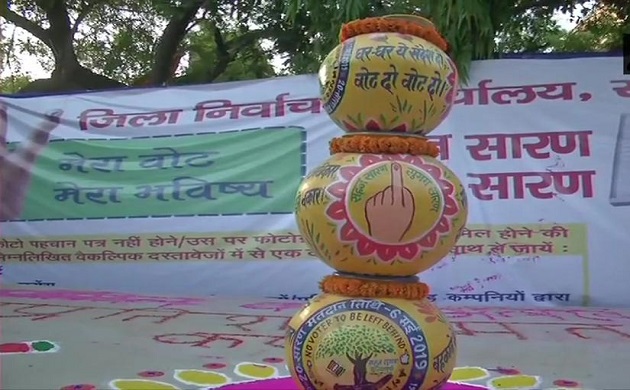 Voters queue up outside a polling station in Ayodhya, Uttar Pradesh:

Voters queue up outside a polling station in Ayodhya, Uttar Pradesh; Voting in 51 parliamentary constituencies across 7 states for 5th phase of elections will begin shortly

Visuals from polling booth no. 333 in Lucknow:

#Visuals from polling booth no. 333 in Lucknow; Voting in 51 parliamentary constituencies across 7 states for 5th phase of #LokSabhaElections2019 to begin shortly pic.twitter.com/9dpuypq1K5

Voting begins in 51 Parliamentary constituencies across 7 states for 5th phase.

Visuals from a polling booth in Lucknow:

MadhyaPradesh: Residents of Garauli village held protests on Sunday saying they would boycott the elections due to inaction on issue of water scarcity in the area; locals say, "We walk 3-4 km daily to collect water. Protested last year as well but nobody pays heed."

Residents of Garauli village held protests y'day saying they would boycott #LokSabhaElections2019 due to inaction on issue of water scarcity in the area; locals say, "we walk 3-4 km daily to collect water. Protested last year as well but nobody pays heed". #MadhyaPradesh

Purulia, West Bengal: The People of Sabar tribe in Bandwan area call for boycott of polls due to unavailability of electricity in their houses. A villager says, "The electricity department said we would get free electricity but later asked for Rs 4,000, how would we pay that amount?"

West Bengal: A villager from Bandwan area says, "electricity department said we would get free electricity but later asked for Rs 4000, how would we pay that amount".

Madhya Pradesh: Visuals from polling stations in Hoshangabad ahead of voting in 51 parliamentary constituencies across 7 states for 5th phase:

#Visuals from polling stations in Hoshangabad, Madhya Pradesh ahead of voting in 51 parliamentary constituencies across 7 states for 5th phase of #LokSabhaElections2019