With the much-awaited Lok Sabha elections drawing near, parties have started heating up their poll campaign and speedily announcing their candidates in all states. While the BJP announced its third list of candidates on Friday night, the Congress also released the names of 34 candidates in its seventh list.

Congress chief Rahul Gandhi will kick-start party’s poll campaign in Bihar and West Bengal today. He will address a ‘Jan Bhawna Rally’ at 12.30 pm in Purnia, followed by another public gathering in Malda.

Meanwhile, the BJP is scheduled to announce the names of 40 candidates for the upcoming polls in Bihar.

Reacting to the announcement of his candidature for the Bhopal Lok Sabha seat, Congress veteran Digvijaya Singh said Saturday that his first choice was Rajgarh, but he accepted the party's decision.

The BJP has also announced names of candidates for byelections in Gujarat and Goa.

BJP releases list of 11 candidates (6 Telangana, 3 Uttar Pradesh and 1 each for Kerala and West Bengal) for the upcoming Lok Sabha elections.

Congress President Rahul Gandhi in Malda: Did the youth get employment, did the farmers receive any help? On one hand Narendra Modi ji lies and on the other hand your Chief Minister keeps on making promises but nothing happens. 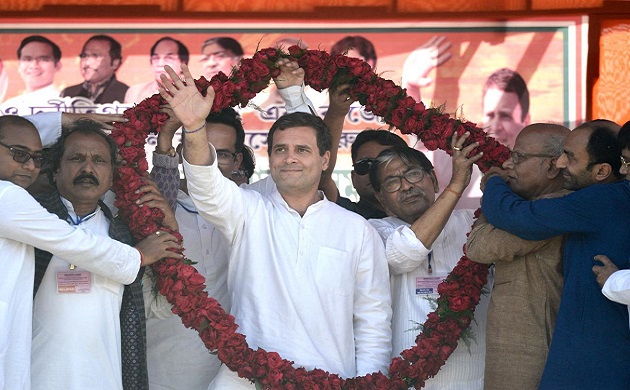 Who is contesting from where? Click here to read the complete list of BJP candidates for Lok Sabha Elections 2019

PM failed to fulfil promises of 2 crore jobs in 5 years and Rs 15 lakh into accounts of every poor household, alleges Rahul Gandhi

Congress and NCP have revised their 26-22 formula in Maharashtra. Both have given two seats from their quota to allies – two seats for Swabhimani Shetkari Saghtana, one for Bahujan Vikas Aghadi and one for Independent MLA Ravi Rana, his wife Navneet Kaur may contest from there, ANI quoted sources as saying.

Homes of poor do not have "chowkidars", says Rahul Gandhi at rally in Bihar's Purnea.

Congress is scheduled to address media shortly. Rahul Gandhi's candidature is likely to be announced.

At first, Narendra Modi used to say that make me PM and I will fulfil all your demands. Now he says make me chowkidar. But question is - are there any chowkidars outside a poor man’s house? Or outside a rich man’s bungalow, says Gandhi during poll rally.

PM Modi is a chowkidar. But not of the poor of the nation but of Anil Ambani.

"Who do you (Rahul Gandhi) support? Doubting the Indian Air Force is not right for the national president of any party. You stand in support when slogans are raised against the country in JNU, and call it the freedom of expression," said Amit Shah.

If terror attacks shouldn't be responded with surgical strikes and air strikes, and should be dealt with talks, is this Congress' policy to deal with terrorism. Congress President should respond on this, says Amit Shah.

"If a country shouldn't be held responsible for deeds of 7-8 people, does Congress believe that Pakistan government and military has a connection with terror attacks here? If there is a connection,who is the culprit, Congress party should answer," says Amit Shah.

"Congress President should explain it to the nation- do you consider such heinous attack (Pulwama attack) a routine incident?" says Amit Shah.

Pitroda’s remarks are demoralising. National security is an important issue. Does Congress belief terror has no links with Pakistan, says Amit Shah

I request media and friends not to speculate about my nomination. I had informed the party months in advance of my decision to not contest LS elections . I, however, remain a loyal member of BJP and a staunch supporter of @narendramodi.

Patna is my city, I was born there, studied there, became a lawyer.Even though I had been working on national level, I've an emotional connection with Patna. I'm grateful to the party, PM Modi, Amit Shah Ji and others, says Ravi Shankar Prasad.

Jitin Prasada is likely to meet Congress president Rahul Gandhi today amid speculations that he was on his way to switch sides and join BJP. According to sources, Prasada wants to contest from Sitapur.

According to sources, Paresh Rawal, BJP MP from Ahmedabad, has infoirmed the party high command that he will not contest the upcoming Lok Sabha elections.

Assam unit of National People's Party (NPP) has declared its first list of 5 candidates for the #LokSabhaElections2019 pic.twitter.com/1uDnjCJz00

The rumour is on. How can I comment on rumours? These are all rumours, says Congress leader Jitin Prasada on reports that he is in touch with BJP.

A meeting of BJP CEC will be held today and I think final decision on 6 Lok Sabha seats (in Chhattisgarh) will be taken and candidates for these seats will be declared, says former CM Raman Singh.

NDA is scheduled to announce 40 candidates in Bihar for the upcoming Lok Sabha polls. The announcement is expected at 11 am in Patna.

Rahul Gandhi would address an election rally at Purnia’s Rangbhoomi Maidan in favour of former BJP MP Uday Singh alias Pappu Singh who quit the saffron party on January 18 and is all set to join the Congress. From Purnia, Rahul will fly to Malda to address another election rally.