The National Capital Voted In The Sixth Phase Of The Lok Sabha Elections 2019 On May 12.

Delhi has been the seat of power for over 100 years. The political pundits believe the party that wins Delhi rules India and it is not just a figure of speech! A cursory glance at the last 20 years of poll results show if Uttar Pradesh sends the bulk of lawmakers, Delhi is the key to Parliament. In 2019 Lok Sabha Elections, the Aam Aadmi Party tried to play on ‘full-statehood’ sentiments, the BJP banked on Modi magic. But it was the Congress that threw in a surprise by fielding Sheila Dikshit from North East Delhi. Pitted against Delhi BJP chief Manoj Tiwari, the Congress veteran and three-time Delhi Chief Minister is confident of winning her comeback polls.

It witnessed an attack on Chief Minister Arvind Kejriwal, acrimonious exchanges between the AAP and the BJP over allegations of horse-trading, rivals jabbing at one another over alleged discrepancies in affidavits and even a candidate of the ruling party in Delhi breaking down in a press conference.

The campaign which got off to a slow start as alliance talks between the AAP and Congress lingered on till the last days of nomination, gained momentum over the last fortnight with senior leaders drawing huge crowds at mega rallies and road shows in the national capital. The campaign reached a crescendo in its last lap with Prime Minister Narendra Modi holding a massive rally at the iconic Ramlila Maidan, Congress President Rahul Gandhi addressing two public meetings, while his sister Priyanka Gandhi Vadra taking out two road shows in the city.

The National Capital voted in the sixth phase of the Lok Sabha Elections 2019 on May 12. 56.11% turnout was recorded in till 5 pm compared to the final turnout of 65.1% in 2014 in the National Capital. The New Delhi constituency, which has many VVIP voters, recorded the lowest voter turnout among all seven constituencies in Delhi at 56.86 per cent, but saw a better turnout of women than men. According to the data, 57.21 per cent of women voters cast their votes while 56.58 per cent men exercised their franchise in the seat. In a first for the city, as many as 17 booths with all women polling officials were established for the Lok Sabha elections in the seven constituencies of Delhi.

As India waits with bated breath for the results of the Lok Sabha Elections, here’s a look back at the Delhi polling trends over the years:

What happened in Delhi in 2014 Lok Sabha Elections? 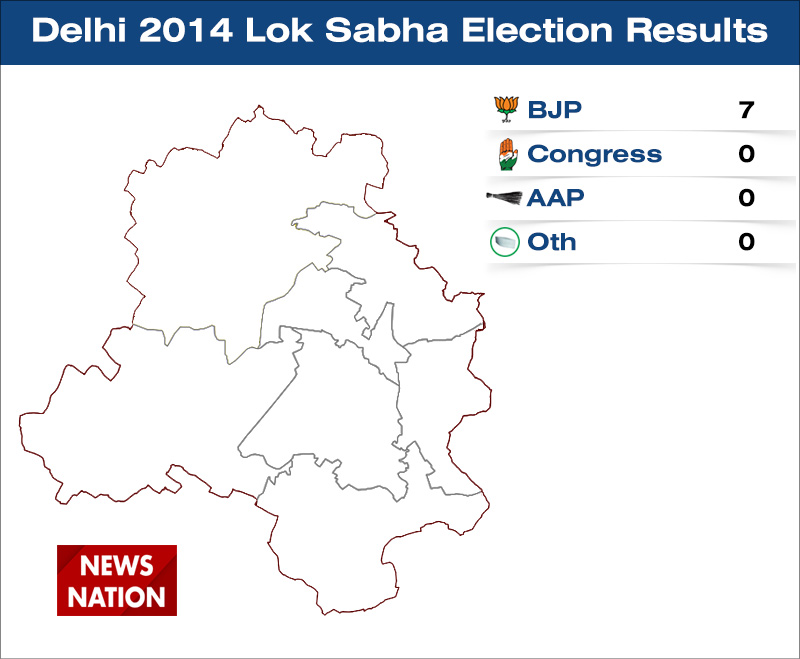 In the 2014 Lok Sabha elections, the BJP registered a thumping victory in Delhi by winning all seven seats of the national capital. Delhi witnessed a triangular contest among the BJP, AAP and the Congress. Out of the total 1.27 crore eligible electors, there were 3.37 lakh first-time electors this election season. On 10 April 2014, the day of polling in the capital, 64.77 % electors practiced their right to vote. The election process was organised across 11,500 polling stations. As per media reports, total 150 candidates contested the seven LS seats of Delhi. The prominent names included Delhi BJP Chief Harsh Vardhan, journalist-turned-politician Ashutosh, Union Minister Kapil Sibal, Congress General Secretary Ajay Maken, Bhojpur superstar Manoj Tiwari, and grandson of Mahatma Gandhi, Rajmohan Gandhi.

What happened in Delhi in 2009 Lok Sabha Elections? 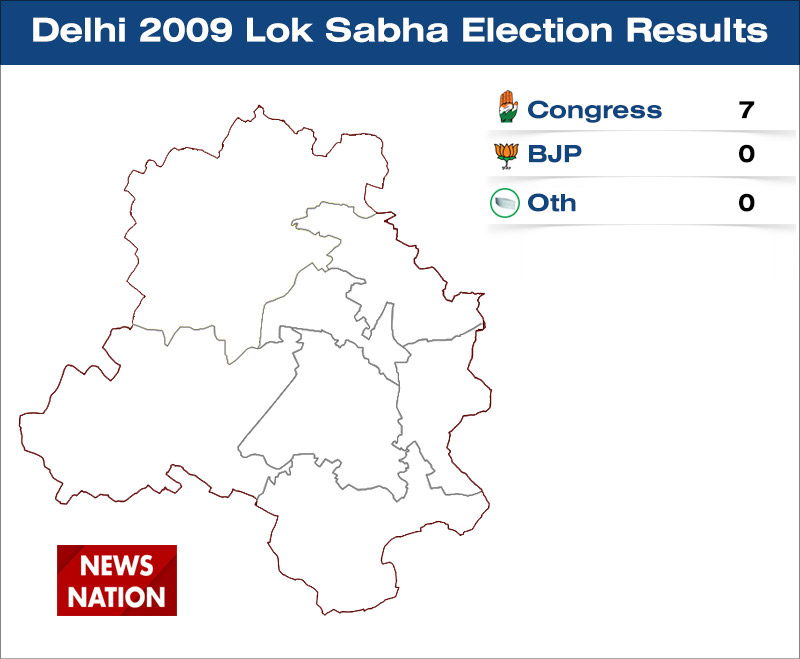 In 2009, the Congress again swept the National Capital and won all seven seats. Manmohan Singh became the first prime minister since Indira Gandhi (1977) to be in office for 10 consecutive years.

What happened in Delhi in 2004 Lok Sabha Elections? 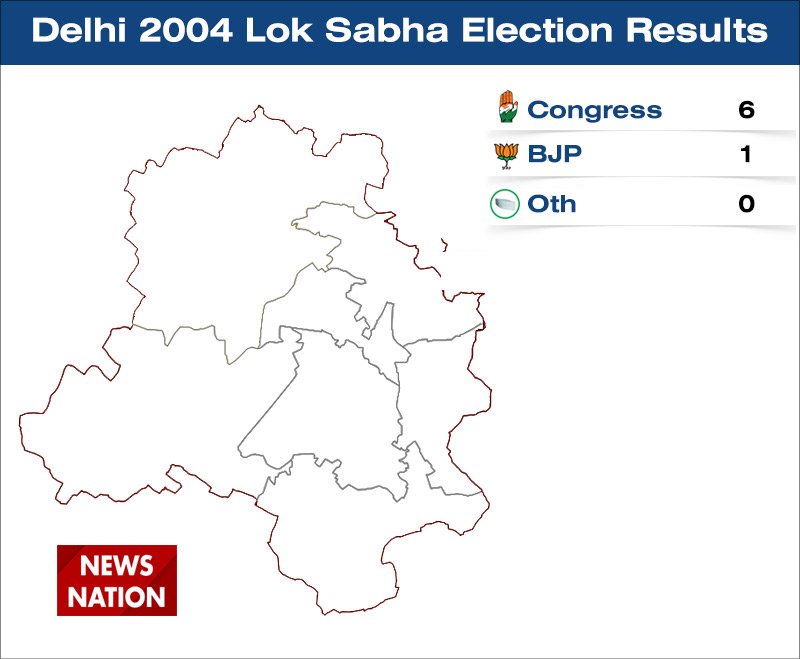 In 2004, Delhi voted in favour of the Congress thus paving way for the Manmohan Singh government at the Centre. The Grand Old Party bagged six seats from the BJP leaving the party with one consolation seat.

What happened in Delhi in 1999 Lok Sabha Elections? 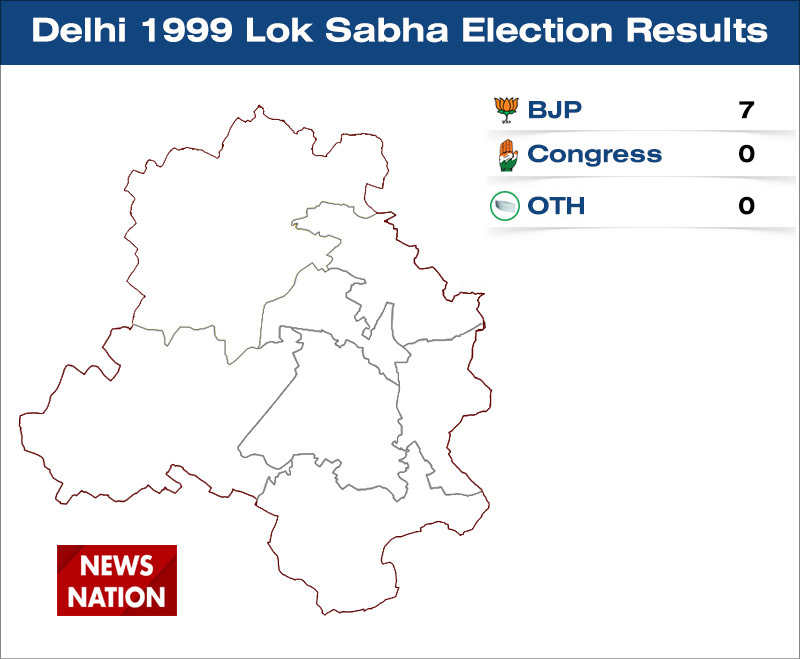 In 1999, the BJP won all the seats in Delhi and won a bigger mandate in the Lok Sabha that year. Vajpayee was sworn in as prime minister for the third time.