As The Counting Set To Begin In A Few Hours, Here’s A Lookback At Results From The State That Sets The Narrative For Political Discourse At National Level.

The D-Day is finally here. After the mammoth election cycle of 38 days the Election Commission of India will be declared the results of the 2019 Lok Sabha Elections on Thursday. All eyes will be understandably on Uttar Pradesh that sends the biggest total of lawmakers to the Lower House of Parliament. With issues such as Ayodhya and development still ruling the roost, it will be a trial by fire for Priyanka Gandhi Vadra, who for the first time campaigned in the official capacity as Congress general secretary. With no other ‘safe’ seat to contest, it is the battle of prestige for Narender Modi, who is against contesting from Varanasi. As the counting begins, here’s a lookback at the elections and the results from the state that sets the narrative for political discourse at national level:

What happened in Uttar Pradesh in 2014 Lok Sabha Elections? 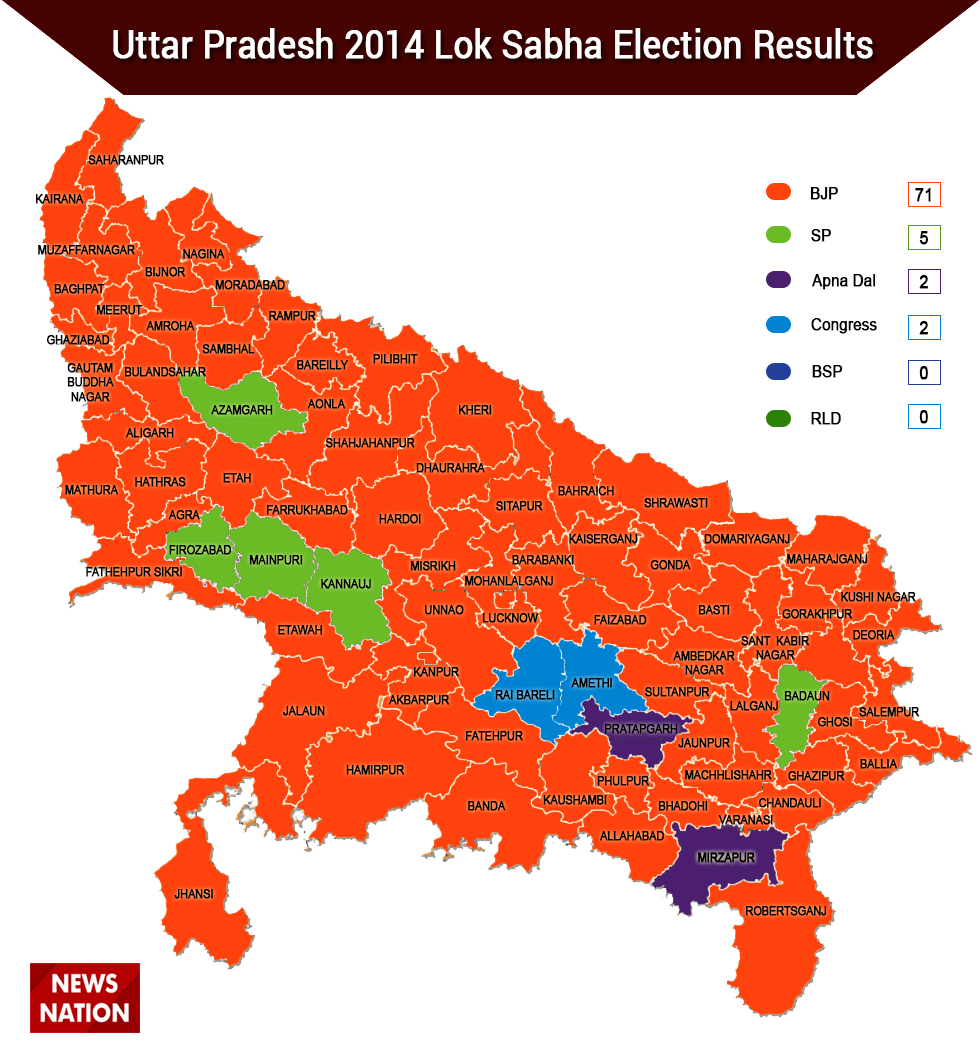 In 2014 Lok Sabha polls, the Bharatiya Janata Party (BJP) along with its ally Apna Dal swept the state and won 73 seats together. The BJP completely routed the Samajwadi Party (SP), the Congress and the Mayawati-led Bahujan Samaj Party (BSP) in the state. Both the BSP and the Ajit Singh's Rashtriya Lok Dal (RLD) were not able to open their accounts in the Lok Sabha polls. Uttar Pradesh sends 80 members to the Lok Sabha and such a massive victory facilitated the BJP's grand comeback at the Centre.

What happened in Uttar Pradesh in 2009 Lok Sabha Elections? 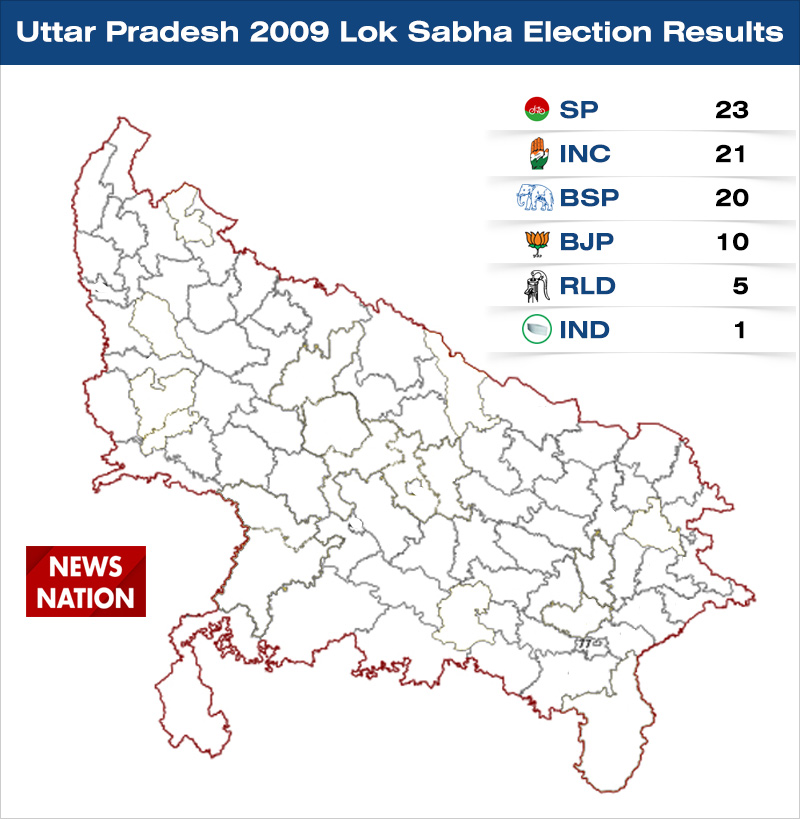 In 2009, the Congress-led United Progressive Alliance returned to power after stellar show in 2004. Dr Manmohan Singh continued to be the Prime Minister of the country for the second term. The UPA won around 261 out of 543 seats, and in the second position was NDA with 158 seats, while 23 seats were won by Left parties. Around 714 million people exercised their vote. Overall 58% turnout was registered in 2009 General Elections. Uttar Pradesh’s state-wise results helped the Congress in gaining as many as 21 seats. The 2009 results were as following:

What happened in Uttar Pradesh in 2004 Lok Sabha Elections? 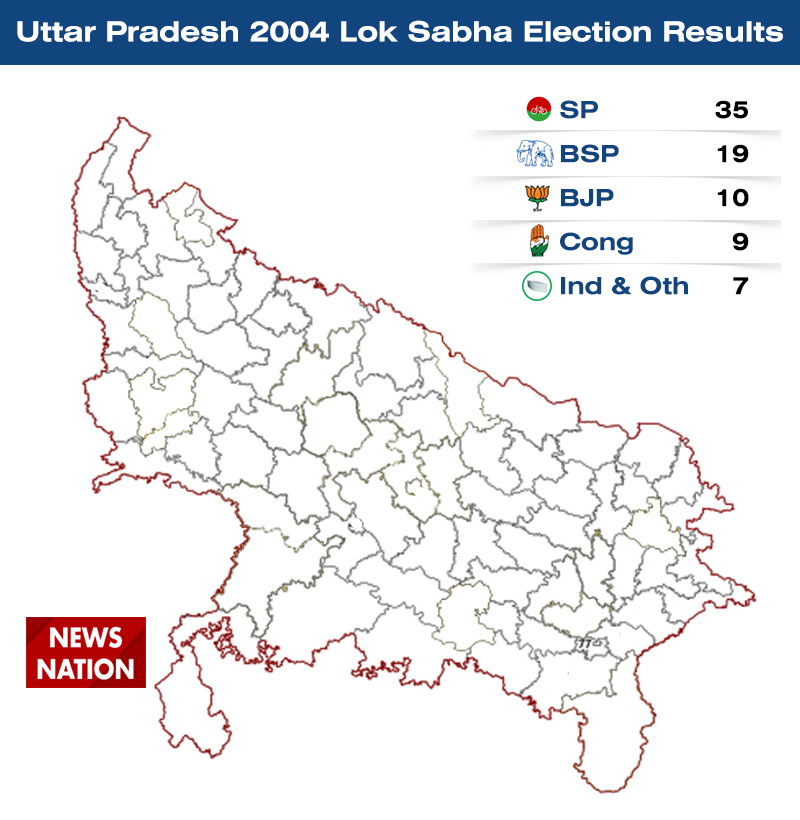 Unlike the present-day scenario, where Samajwadi Party is in a reluctant alliance with the BSP in order to stay politically relevant, the Mulayam Singh’s party was a force to reckon with in the regional setup. In the 2004 elections, the Congress emerged the single largest party winning 145 seats followed by the BJP at 138. The Congress thus staked its claim to forming a government in alliance with several parties. ‘India Shining’ came out to be just an illusion for the BJP with ground realities starkly different.

The biggest gainer in Uttar Pradesh of 2004 was Samajwadi Party. Thus, the final tally of 2004 UP was:

What happened in Uttar Pradesh in 1999 Lok Sabha Elections? 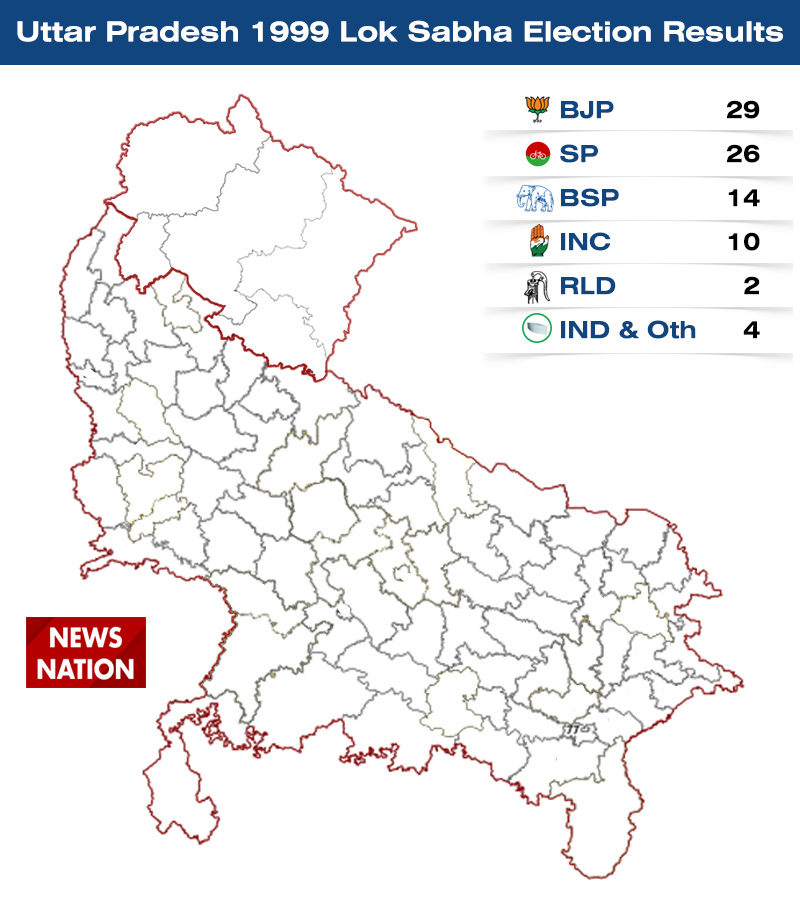 The political instability led to three general elections in just three years. Atal Behari Vajpayee-led coalition reversed the trends. The Kargil War boosted the stock of Vajpayee and the BJP across much of the country. However, things were different in Uttar Pradesh and Punjab. As a ‘Frontline’ report pointed out, there was no swing either towards the BJP (its vote share declined by 1.8 percentage point from 1998) or towards its allies (their combined vote share declined by 1.5 percentage points from what they won in the twelfth general election). In fact, in 1999 the Congress( I) contested 20 fewer seats than in 1998, but improved its vote share by 2.7 percentage points. The undivided Uttar Pradesh that used to send record 85 lawmakers to the Lok Sabha. Here’s the final tally of the 1999 General Elections that show party-wise seats won in undivided UP: