In 1995, Samajwadi Party Workers Had Allegedly Attacked A State Guest House Where Mayawati Was Camping With Her Supporters. (File Photo)

When Samajwadi Party patriarch Mulayam Singh Yadav and Bahujan Samaj Party Mayawati will share stage at a joint rally in Mainpuri on Friday, it will certainly be a sight to behold. Once steadfast rivals have now joined hands to take on the Narendra Modi-led Bharatiya Janata Party (BJP) in the Lok Sabha elections. Preparations are underway at the Christian Field in Mainpuri to send out a message to political opponents that the alliance against the BJP in Uttar Pradesh shares a strong bond, news agency PTI quoted a Samajwadi Party worker as saying.

In 1995, Samajwadi Party workers had allegedly attacked a state guest house where Mayawati was camping with her supporters. The immediate provocation was Mayawati's decision to withdraw from the government and join hands with the BJP. Ever since then the two had become sworn enemies. The SP patriarch is contesting from Mainpuri and Mayawati campaigning for him is proof that they have buried their hatchet, at least for now. Mulayam had not attended the other SP-BSP joint rallies in Deoband, Badaun and Agra because of health issues.

Besides Mulayam Singh Yadav, both Akhilesh Yadav and Mayawati will address the rally along with Rashtriya Lok Dal chief Ajit Singh. Raj Kumar, the party's Sadar legislator, said Mulayam Singh Yadav will reach the venue by noon. Around 35,000 people will be provided with food packets on the occasion, he added. 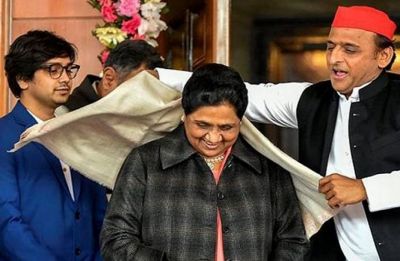 The allied SP-BSP will be contesting on 37 and 38 seats respectively, and its smaller ally the RLD will be fielding candidates in 3 constituencies in the states.

While the SP and BSP kept the Congress out of the alliance, they decided not to field any candidate on the Rae Bareli and Amethi seats – the two strongholds of the Congress in the state.

The Congress party in return announced that it will not contest on seven seats including Mainpuri and Kannauj from where Mulayam Singh Yadav and Dimple Yadav are expected to contest.

SP patriarch Mulayam Singh Yadav had created a flutter in the Lok Sabha last month when he said he wished to see Narendra Modi back as prime minister, a sentiment that the PM had acknowledged with folded hands.

And pointing to Modi, the SP founder had added he wished the BJP leader too to come back as the prime minister. His remarks had drawn applause from the treasury benches.