Lok Sabha Polls 2019 | It's an insult to Advani, says Mamata Banerjee on BJP dropping him

Congress president Rahul Gandhi will visit Rajasthan today. He will campaign in Sriganganagar and Bundi. The NCP, in its election manifesto said that if voted to power, the party will discuss terrorism with Pakistan. After 'Boat Yatra', Priyanka Gandhi Vadra to visit Ayodhya by train.

Lal Krishna Advani was the actual mentor of BJP. They have forgotten old days because of the new crop of leaders. But old is gold. It's an insult to him. But this is my opinion, they may not agree with it, says Mamata Banerjee.

After 2019 for 3 years Congress party is going to give young entrepreneurs complete exemption, for 3 years you won't need to take any permission from the government. You can file for the permissions you need after 3 years, says Rahul Gandhi

I'm feeling happy, I'm thankful to Amit Shah ji and Modi ji for having the confidence in me and giving me this seat. Rampur has always given me love and affection, the people love me with all their hearts, It feels like I'm going back home, says Jaya Prada.

Today I have come to make two requests, one to reelect V K Singh as MP again and second to choose Narendra Modi as PM again, says Sushma Swaraj.

The Congress is still relying on the 'Garibi Hatao' slogan coined by former Prime Minister Indira Gandhi in 1971 as they could not drive away poverty during their rule, says Defence Minister Nirmala Sitharaman.

Congress has released list of three candidates for Lok Sabha elections, two for Gujarat and one for Uttar Pradesh

Nyay scheme is not free gift to the poor, it's justice, says Rahul Gandhi on income guarantee plan promised by Congress.

When a decision will be taken then we will inform the media, says Sheila Dikshit on possible alliance with AAP.

Congress Delhi Chief Sheila Dikshit on possible alliance with AAP: When a decision will be taken then we will inform the media. Ultimately decision is to be taken by Rahul Gandhi as he is the party president, all will abide by what he decides pic.twitter.com/BDMaRgXsP9

Dr Tejaswini Ananth Kumar (wife of late Union minister Ananth Kumar)who was not given BJP ticket from Bangalore South LS seat:It's shocking.I stand with the party's decision.Let's not start asking questions. If we have to contribute to the country then we have to work for Modi Ji pic.twitter.com/4ro8MPJKnd

BJP releases list of 42 star campaigners for phase 1 and 2 of #LokSabhaElections2019 from Bihar. pic.twitter.com/xdcS3U9rU7

Sheila Dikshit is currently addressing a press conference in Delhi where she is discussing the recently flagged Congress NYAY scheme. "It is the blueprint of a new India, we must celebrate this scheme," she says.

Congress has been supporting Pakistan on the Pulwama terror attack, says Smriti Irani in Bhadohi.

Smriti Irani hits out at Priyanka Gandhi over her 'boat campaign' from Allahabad to Varanasi. Irani says the latter is visiting temples while the Congress raised questions on Lord Ram.

Delhi Congress chief Sheila Dikshit is expected to address the media today. Reportedly upset over the alliance talks with AAP, Dikshit has put the onus on Rahul Gandhi to decide on joining hands with Arvind Kejriwal. 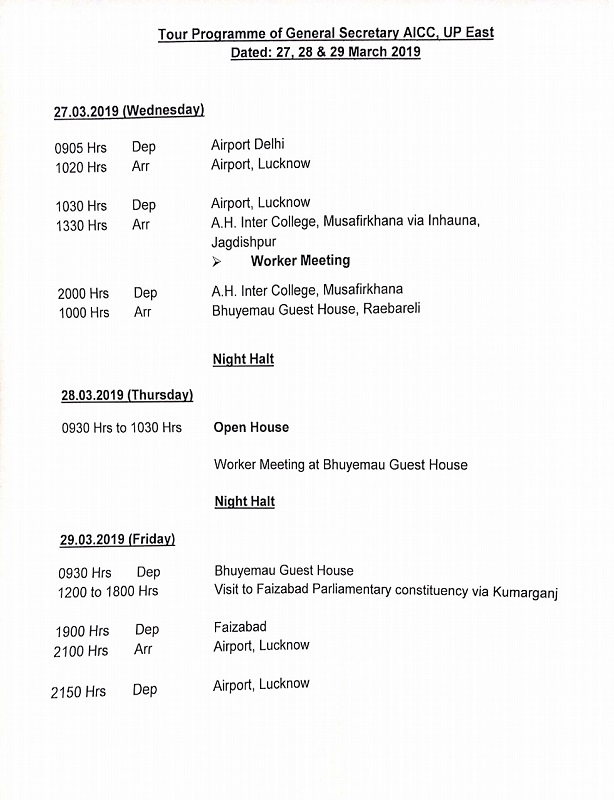 Rahul Gandhi promises 'surgical strike' on poverty, says "If Modi gives money to rich, Cong will give money to poor."

Rahul Gandhi in Sri Ganganagar, Rajasthan: How many are there at Anil Ambani's home? There is a queue of chowkidaar there. Narendra Modi did not tell you that he is not yours but chowkidaar of people like Anil Ambani and Nirav Modi.

The Congress has fielded women candidates, including a former MLA, in two key constituencies - Durg and Korba in Chhattisgarh for the April-May Lok Sabha polls.

Vikramaditya Singh (54), on the other hand, is the grandson of the last Dogra ruler Maharaja Hari Singh and son of Congress leader Karan Singh. His candidature is also supported by the National Conference (NC).

Union minister Jitendra Singh will have a direct contest with Congress candidate Vikramaditya Singh, the grandson of erstwhile Maharaja Hari Singh, on the Udhampur-Doda parliamentary seat.

Former chief minister of Delhi and Congress stalwart Shiela Dixit will hold a press conference at 3 pm today. Dixit is expected to announce the final decision on the AAP-Congress alliance in the country's capital.

Pinaki Misra, BJD: Issue never came up when Patnaik ji was holding addl charge, so he has no role to play in this. Repeated attempts have been made to try & rope him in by Centre. It's being driven by unholy cash generated by some vested interests attempting to play a dirty game.

Pinaki Misra, BJD: Issue never came up when Patnaik ji was holding addl charge, so he has no role to play in this. Repeated attempts have been made to try & rope him in by Centre. It's being driven by unholy cash generated by some vested interests attempting to play a dirty game. https://t.co/NCiSL5S1uN

Pinaki Misra, BJD on the impleadment application against Naveen Patnaik filed in SC in a coal block allocation case: It's a contemptible issue. The issue is 21 yrs old. It relates to a time when Naveen Patnaik was holding additional charge of the Coal Ministry for about a couple of months only.

Leading the BJP's Vijay Sankalp Sabha in Delhi, Home Minister Rajnath Singh is currently addressing a rally here, where he has once again rattled the Chowkidar Chor Hai jibe of the Congress. 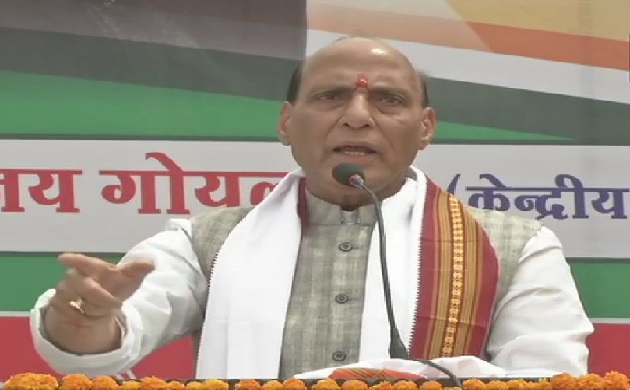 Former BJP leader Ghanshyam Tiwari is likely to join the Congress in Jaipur on Tuesday, party sources said. In 2017, Tiwari had opened a front against BJP leader and then chief minister Vasundhara Raje and resigned from the party in June 2018.

Tejasvi Surya: Tejaswini ji (wife of late Union minister Ananth Kumar) has given me her blessings, she has also instructed all the karyakartas who were anticipating her candidature, that the party's decision is the foremost decision & we all have to respect it.

The Congress has released star campaigner list for West Bengal: 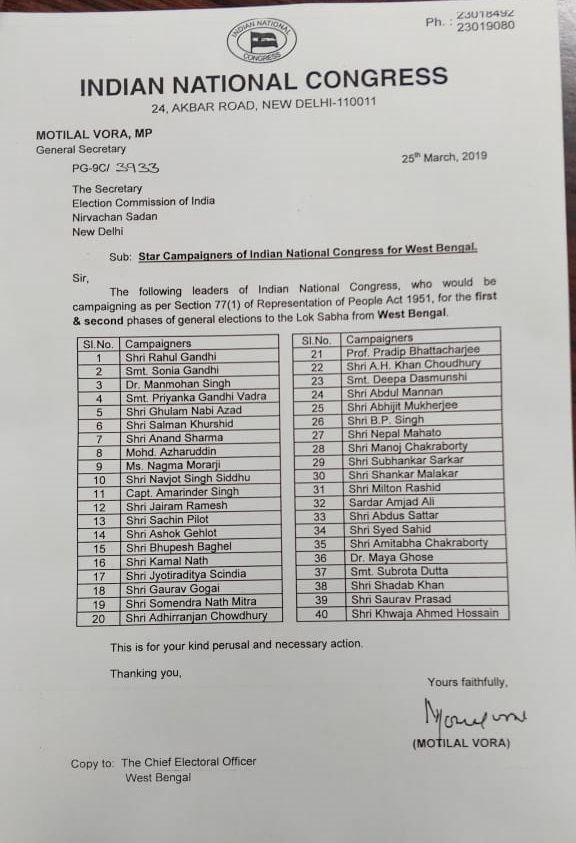 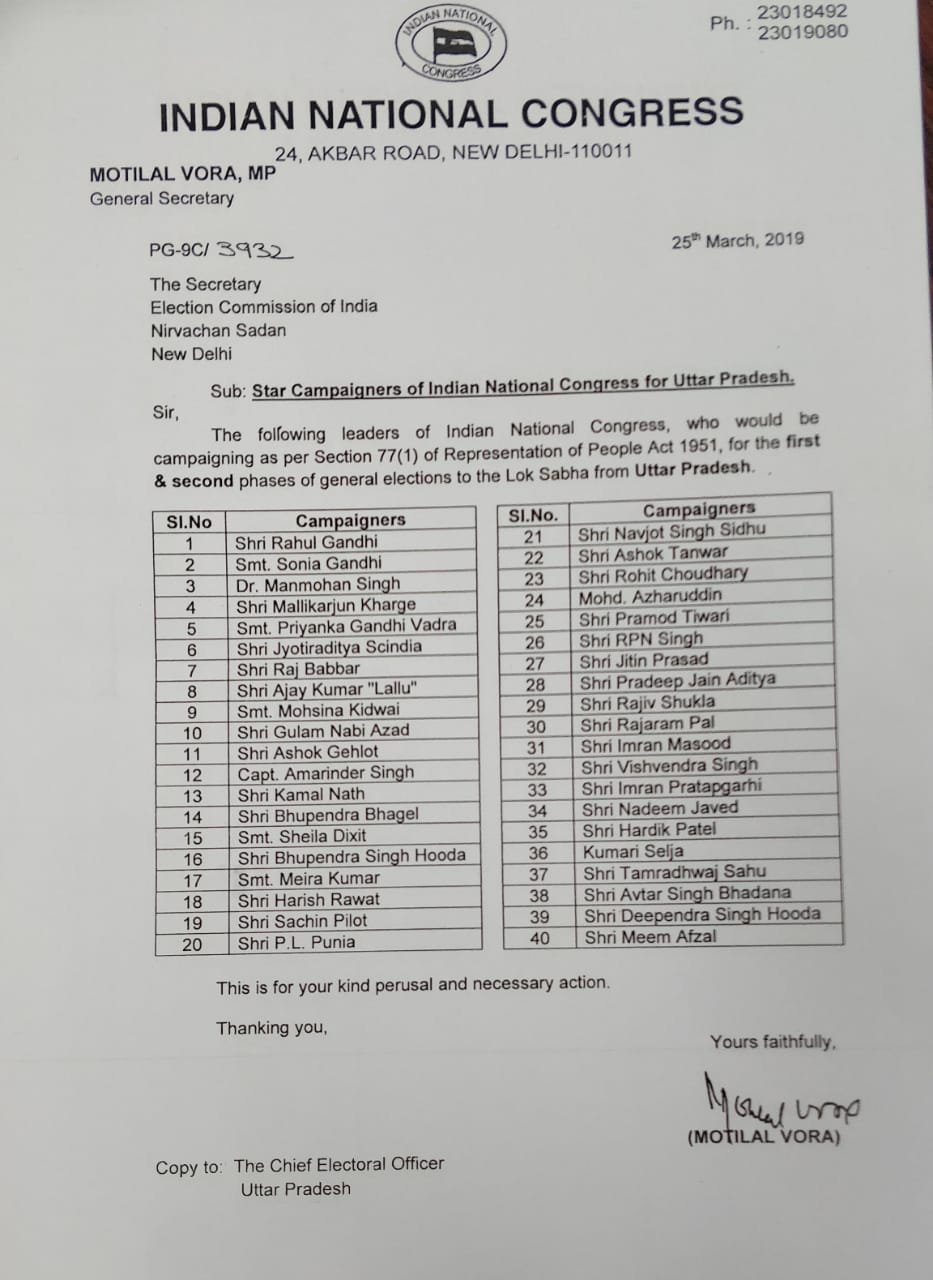 Supreme Court says if any candidate is elected, he or she will be treated as independent.

The Supreme Court refuses to direct Election Commission to issue common symbol “pressure cooker” to TTV Dhinakaran faction of AIADMK for its candidates to contest upcoming Lok Sabha & Assembly by-elections in Tamil Nadu. However, SC asks EC to give them a common symbol from among the free symbols available.

Political parties will not be allowed to campaign in the vicinity of churches on Good Friday, which falls on April 19, the state’s Chief Electoral Officer Kunal has instructed.

Check out this picture tweeted by Congress MP Shashi Tharoor on Monday during canvassing for the Lok Sabha Polls:

"No one is spared during elections- not even the groom and bride trying to get a quiet lunch when their MP comes canvassing for votes!"

No one is spared during elections- not even the groom and bride trying to get a quiet lunch when their MP comes canvassing for votes! pic.twitter.com/I8wauC4eKM

Tejasvi Surya has been named the party's candidate for the prestigious Bangalore South seat in Karnataka after much discussion and drama. Check out his reaction: "OMG OMG! I can't believe this. PM of world's largest democracy and President of largest political party have reposed faith in a 28-year-old guy to represent them in a constituency as prestigious a Bangalore South. ...This can happen only in my BJP. Only in #NewIndia of @narendramodi," tweeted Tejasvi Surya.

OMG OMG!!! I can't believe this.
PM of world's largest democracy & President of largest political party have reposed faith in a 28 yr old guy to represent them in a constituency as prestigious as B'lore South. This can happen only in my BJP. Only in #NewIndia of @narendramodi

Actress Sumalatha's decision to contest as an independent from Mandya Lok Sabha seat, where JD(S) has fielded Chief Minister HD Kumaraswamy's son Nikhil, has upset the calculations of the ruling coalition, especially with the BJP now extending support to her.

Union Minister Nitin Gadkari has declared movable and immovable assets worth Rs 25.12 crore in an affidavit filed along with his nomination papers for the Nagpur parliamentary constituency.

The Madras High Court has directed election officials to remove all unauthorised flag poles of political parties in public places throughout Tamil Nadu by April 1.

According to seizure report released by EC, total cash seized Rs 143.47 crore, liquor worth Rs 89.64 crore, drug & narcotics worth Rs 131.75 crore, precious metals worth Rs 162.93 crore and other items and  freebies worth Rs 12.202 crore, seized across all states and Union Territories till March 25.

The Congress has released the list of star campaigners for the first and second phase of Lok Sabha Elections 2019 from Maharashtra. 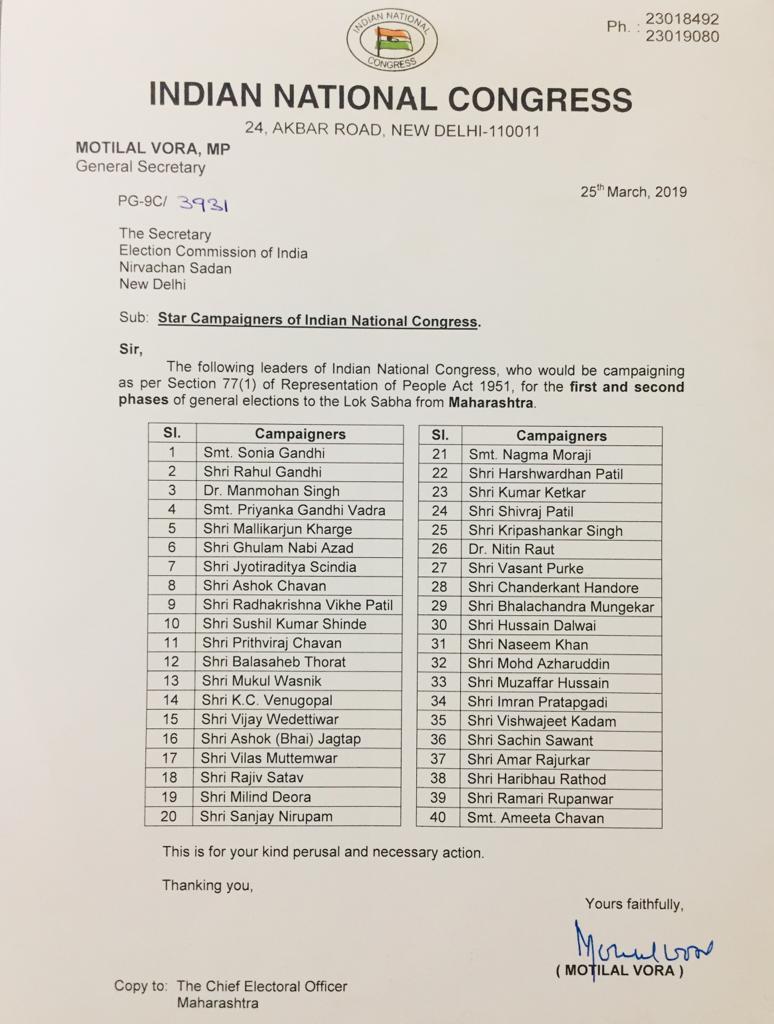 Raipur district administration organised a cricket tournament and a tug of war game on Monday in a bid to create awareness about voting, under Systematic Voters' Education and Electoral Participation (SVEEP) programme of Election Commission of India.

Congress spokesperson PC Chacko said that Rahul Gandhi will take the final decision today. We've had no word with AAP, as we had to take the preliminary decision on our party's political stand whether we wanted an alliance or not. Both parties may have problems, that apart we have to defeat Modi and BJP, so, we'll come together.

BJP veteran and MP Murli Manohar Joshi not to contest from Kanpur: Sources.

BJP general secretary hits out at TRS for 'autocratic' rule.

The BJP has expelled one of its senior Lucknow-based leaders after he dubbed the party's top leadership as "Gujarati thugs" and asked if the BJP has chosen a 'pradhan mantri' (prime minister) or a prachar mantri (advertisement minister).

Congress general secretary Priyanka Gandhi Vadra took a jibe at Namo Again and Chowkidaar T-shirts, being sold as a part of poll merchandise for the ensuing Lok Sabha election.

Suheldev Bhartiya Samaj Party (SBSP) chief OP Rajbhar said that his party is in talks with the Congress, which has offered eight seats in Uttar Pradesh.

Congress president Rahul Gandhi will visit Rajasthan today. He will campaign in Sriganganagar and Bundi.