Lok Sabha Polls 2019: From Sonia Gandhi to Rajnath Singh, key contests in Round 5

Amethi has been a Congress bastion since the first Lok Sabha polls as the party lost the seat only twice in 1977 and 1998. In 1998, BJP's Sanjay Singh won the prestigious seat for the party for the first time. Rajiv Gandhi won the seat four times in 1981 (bypoll), 1984, 1989 and 1991 (he was assassinated before the declaration of results). Satish Sharma represented the constituency twice in 1991 and 1996 whereas Sonia Gandhi once in 1999. Rahul Gandhi has been representing the seat since 2004 and is trying his luck for the fourth term this time. BJP's Smriti Irani, who gave Rahul Gandhi a close fight in 2014, will be taking on the Congress chief again.

Like Amethi, Rae Bareli is another Congress fiefdom in Uttar Pradesh. Sonia Gandhi has been representing the seat since 2004 and is again contesting the polls. However, BJP's Ashok Singh won the seat twice in 1996 and 1998. Former prime minister Indira Gandhi represented the constituency twice in 1967 and 1971 before she was defeated by Raj Narain in 1977. In 2014, Sonia Gandhi won the seat with a huge margin of over 3,50,000 votes. 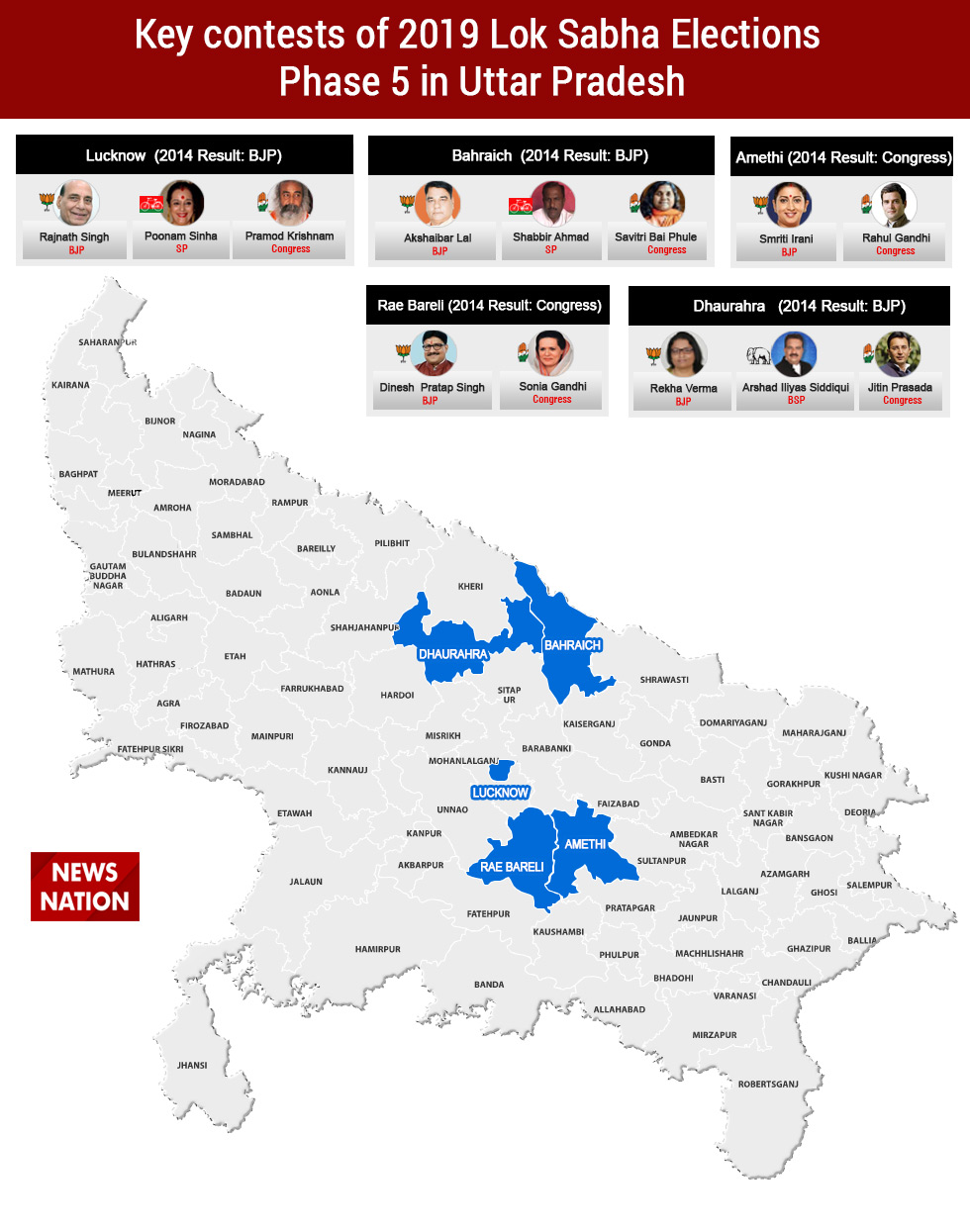 In 2014, BJP candidate Savitri Bai Phule won the seat with a margin of over 95,000 votes but now Phule is in the Congress. She will be contesting against BJP's Akshaibar Lal and SP's Shabbir Ahmad. In the last seven elections, the BJP represented the seat four times in 1991, 1996, 1999 and 2014 whereas the BSP, the SP and the Congress won the seat in 1998, 2004 and 2009 respectively. Former Union minister Arif Mohammed Khan won the seat thrice.

Former Union minister and Congress leader Jitin Prasada is again facing BJP's Rekha Verma in Dhaurahra. In 2014, Rekha Verma won the seat with a good margin of over 1,25,000 votes and Prasada came at the fourth spot. Prasada represented the seat in 2009 and before the delimitation process represented the Shahjahanpur seat also in 2004.

Union Minister Rajyavardhan Singh Rathore, who won the Jaipur Rural seat in 2014 by over 3,30,000 votes, is taking on another Olympian Krishna Poonia this time. Poonia is the Congress legislator from Sadulpur Assembly seat. In 2014, the Olympic shooting silver medalist defeated Congress heavyweight CP Joshi. In 2009, the seat was represented by the Congress party. 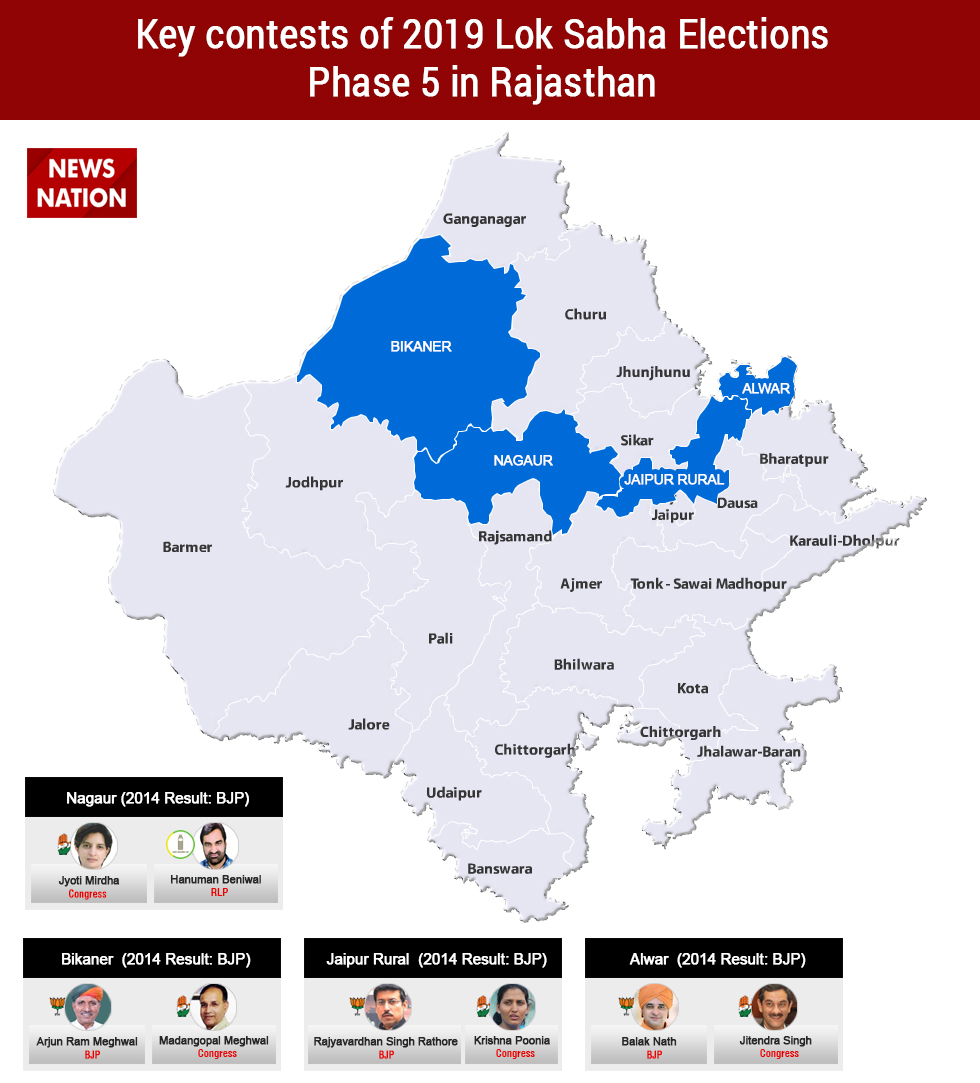 The Congress won the Alwar seat in a 2018 bypoll when its candidate Karan Singh Yadav defeated BJP's Jaswant Singh Yadav by over 1,95,000 votes. In 2014, the seat was won by BJP's Chand Nath who defeated Jitendra Singh by over 2,80,000 votes. However, Chand Nath died in 2018 and this necessitated the bypoll in the constituency. The BJP has decided to field Chand Nath's successor Balak Nath this time whereas the Congress has again given its ticket to Jitendra Singh. In the last eight Lok Sabha elections, the Congress represented the seat five times in 1996, 1998, 2004, 2009 and 2018 (bypoll) whereas the BJP won the seat three times in 1991, 1999 and 2014.

The Nagaur seat was once considered as the bastion of the Congress as the party won it even during the anti-Indira wave in 1977. However, the BJP won the seat for the first time in a 1997 bypoll. The party again won it in 2004 and 2014. The saffron party has decided not to field its incumbent MP CR Choudhary this time and entered into an alliance with the Rashtriya Loktantrik Party (RLP). Hanuman Beniwal is taking on Congress candidate Jyoti Mirdha.

In 2014, BJP's Prahlad Patel defeated Congress candidate Mahendra Pratap Singh by over 2 lakh votes in Damoh. Patel is again in the fray and will be taking on Congress leader Pratap Singh Lodhi this time. The BJP has been winning the seat since 1989 whereas the Congress last won it in 1984. 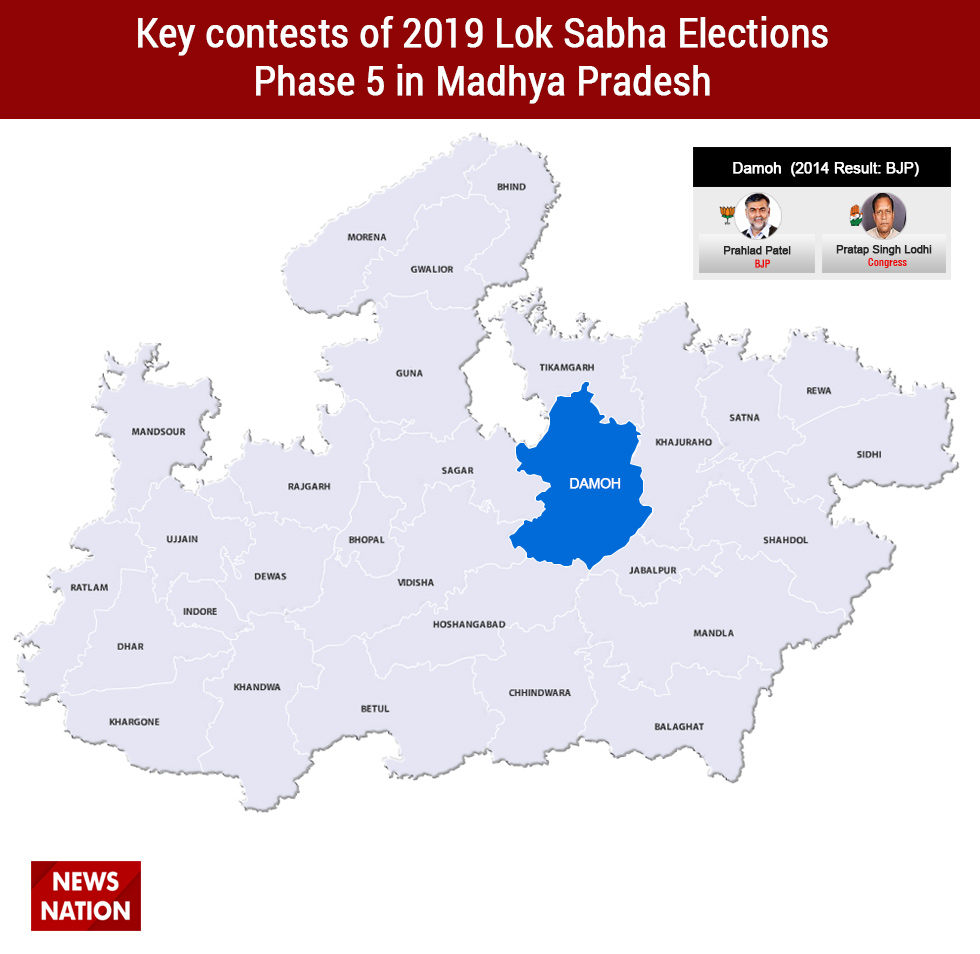 Trinamool Congress leader and former railway minister Dinesh Trivedi is locked in a fierce battle with BJP's Arjun Singh this time. Singh was the four-time Trinamool MLA before he joined the BJP. Trivedi won the seat in 2009 and 2014. CPM's Tarit Baran Topdar represented the constituency six times in 1989, 1991, 1996, 1998, 1999 and 2004. Congress candidate Md Alam and CPM's Gargi Chatterjee are also in the fray. 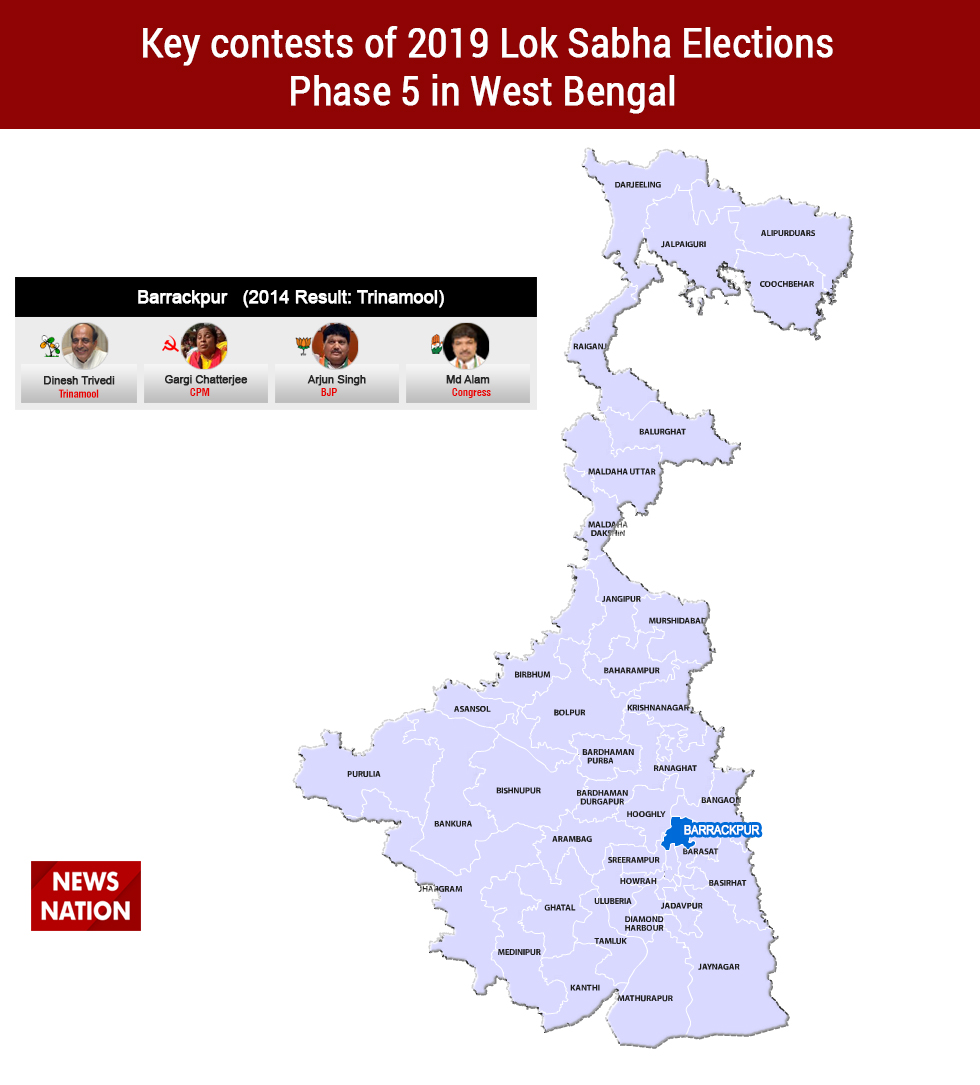 BJP leader Rajiv Pratap Rudy is the sitting MP from Saran and defeated Lalu Prasad's wife and former Bihar chief minister Rabri Devi in 2014 by over 40,000 votes. Lalu's relative Chandrika Rai is taking on Rudy this time. In 2009, Lalu represented the seat when he defeated Rudy. 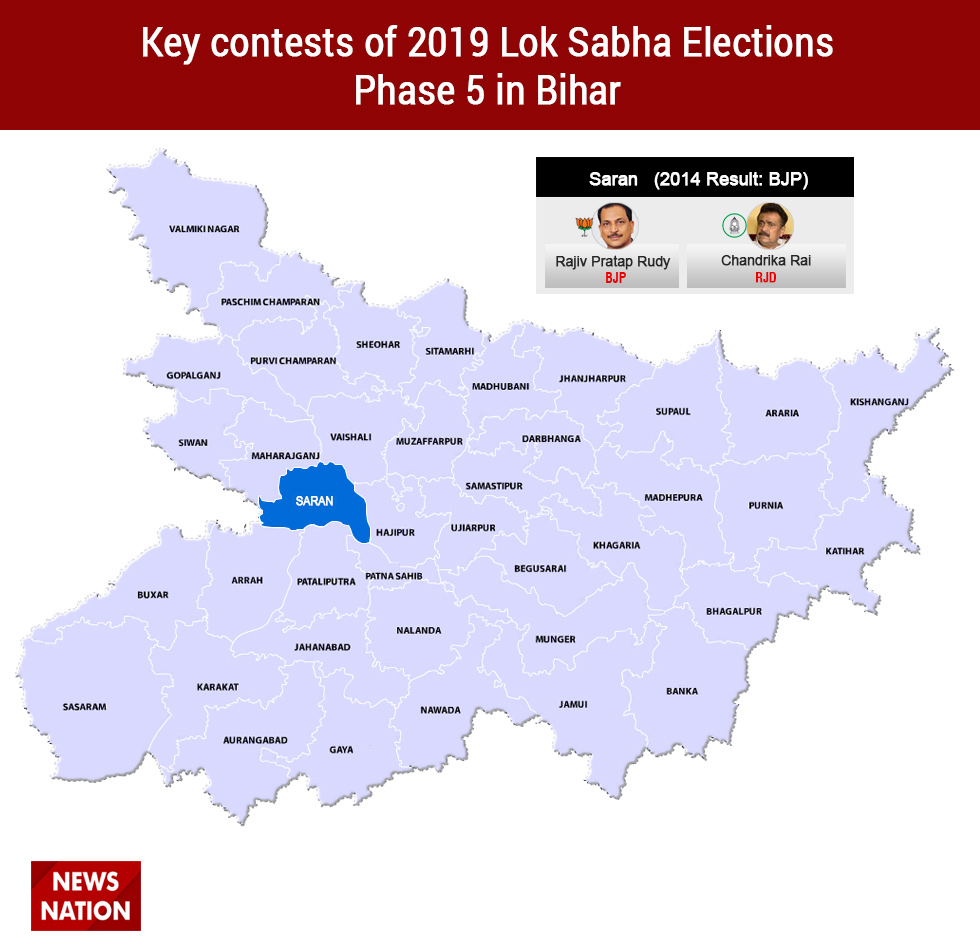 Jharkhand's Khunti is a BJP stronghold and party leader Karia Munda represented the seat eight times in 1977 (as a Janata Party candidate), 1989, 1991, 1996, 1998, 1999, 2009 and 2014. However, the BJP has decided to replace Karia Munda with former state chief minister Arjun Munda this time. The Congress has again fielded Kalicharan Munda against Arjun Munda. 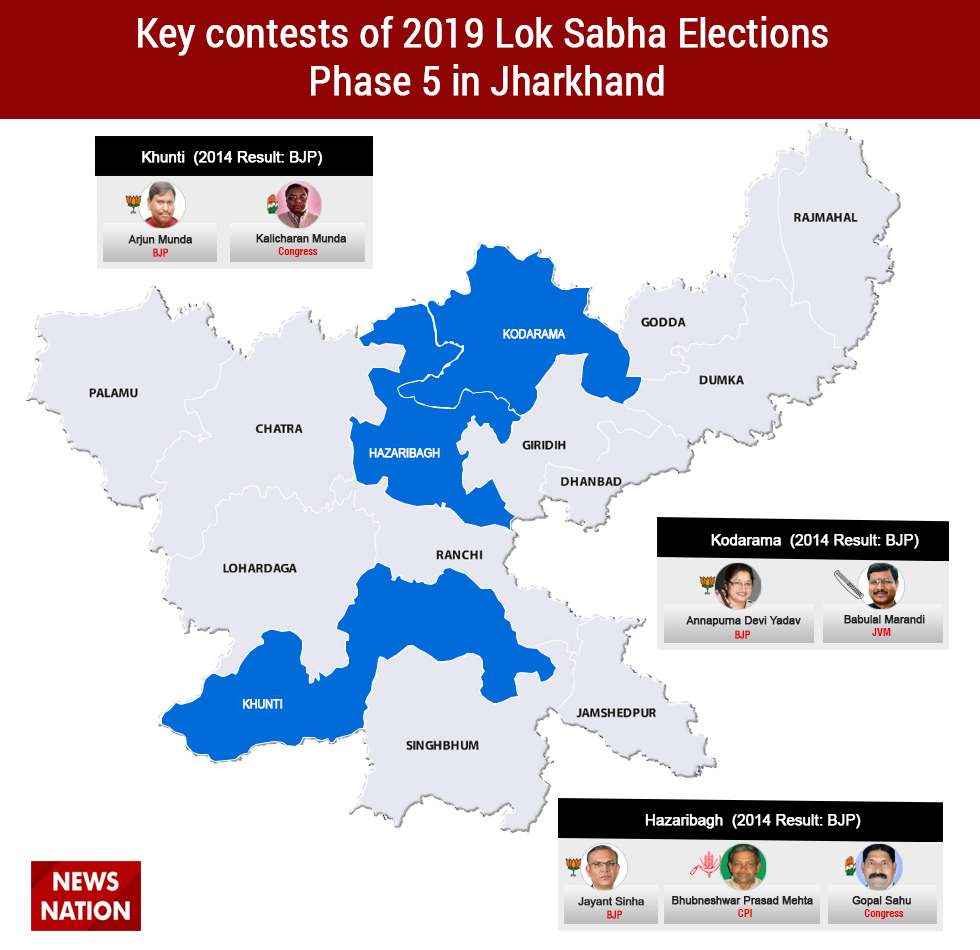 Former Jharkhand chief minister and JVM president Babulal Marandi, who represented the seat thrice, is taking on BJP's Annapurna Devi Yadav. The BJP has dropped its sitting MP Ravindra Kumar Ray this time and fielded Annapurna, who was a former state president of the RJD. Marandi won the seat in 2004, 2006 (bypoll) and 2009. In 2014, BJP's Ray defeated CPI-ML's Raj Kumar Yadav by over 98,000 votes, while Marandi could get only the third position. Raj Kumar is again in the fray.

Union Minister Jayant Sinha will try to get a second term from Hazaribagh. In 2014, Jayant defeated Congress candidate Saurabh Narayan Singh by over 1,59,000 votes. The seat was represented by Jayant's father Yashwant Sinha thrice in 1998, 1999 and 2009. CPI's Bhubneshwar Prasad Mehta, who won the seat in 1991 and 2004, is again contesting the elections. The Congress last represented the the seat in 1984.