The BJP-Shiv Sena combine is likely to win 32 seats in Maharashtra in the upcoming Lok Sabha elections 2019, while the Congress-NCP alliance may improve its tally by bagging 16 parliamentary constituencies, according to the News Nation national Opinion Poll. The figures could be a matter of concern for the BJP-Sena combine as it had bagged 41 of the 48 Lok Sabha seats in 2014. The BJP won 23 parliamentary constituencies in the state while Sena bagged 18. The Congress had managed to win only two seats, while the NCP did a tad better by winning four.

As far as the vote-share is concerned, the BJP-Sena duo is expected to get 41 per cent of the votes, while the Congress-NCP may settle with 34 per cent of the total votes, the poll predicted. 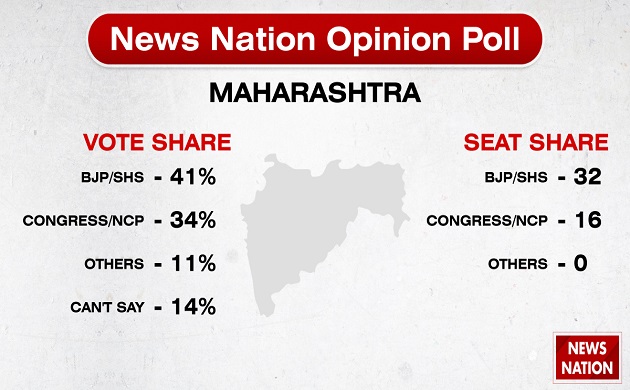 Overcoming their strained ties, the BJP and the Uddhav Thackeray-led Shiv Sena had on February 18 announced to contest the ensuing Lok Sabha and Maharashtra Assembly elections together. As per the seat-sharing agreement, the BJP will contest 25 seats and Shiv Sena 23 of 48 Lok Sabha seats in Maharashtra.

At present, Sena has 18 MPs in Lok Sabha, its biggest tally since its inception. It was also conveyed to Sena that the party could claim more portfolios in the Central government if it manages to retain its current stock post elections.

Maharashtra, which is a representative of 48 Lok Sabha seats, will go to polls in 4 phases on April 11, 18, 23, 29. On April 11, voting will be held for seven seats, namely Wardha, Ramtek, Nagpur, Bhandara-Gondiya, Gadchiroli-Chimur, Chandrapur and Yavatmal-Washim, all in Vidarbha region.

The seats that will vote in the second phase on April 18 are Buldana, Akola, Amravati, Hingoli, Nanded, Parbhani, Beed, Osmanabad, Latur and Solapur constituencies. Most of these seats fall under the Marathwada region.

A total of 14 Lok Sabha seats will go to polls on April 23 during the third phase. They include Jalgaon, Raver, Jalna, Aurangabad, Raigad, Pune, Baramati, Ahmednagar, Madha, Sangli, Satara, Ratnagiri-Sindhudurg, Kolhapur and Hatkanangle.

The counting of votes for seven-phase Lok Sabha Elections across India will be taken up on May 23.