Naidu Is Protesting Against Alleged â€œinjustice' Done To Andhra Pradesh By Denying Special Category Status By The Centre.

Andhra Pradesh chief minister N Chandrababu Naidu sat on a day-long fast with his ministers and party lawmakers in New Delhi on Monday to protest against alleged â€œinjusticeâ€ done to his state by denying special category status, officials in his office said. â€œImportant leaders of other opposition parties will visit Naidu during this period to extend support,â€ an official in the chief ministerâ€™s office said. Naidu will lead a delegation of his partyâ€™s leaders to President Ram Nath Kovind on Tuesday. The Telegu Desam Party (TDP) chief and his ministerial colleagues began the day by visiting the Rajghat. All of them were dressed in black as a mark of protest.

Here are the Highlights from Andhra Bhawan:

1.30 pm:Â Chandrababu Naidu ji, I would like to congratulate TDP. We started this fight 4 years back but there is a very important date - July 20, 2018 - when TDP brought in 'No Confidence Motion' in Lok Sabha. This scared Modi, says Derek O'Brien, Trinamool leader at 'Dharma Porata Deeksha'.

11.30 am:Â I stand in support of Naidu, special category status promise must be implemented without any further delay. Demand for special status had support of all parties when it was discussed in Parliament, says former PM Manmohan Singh. 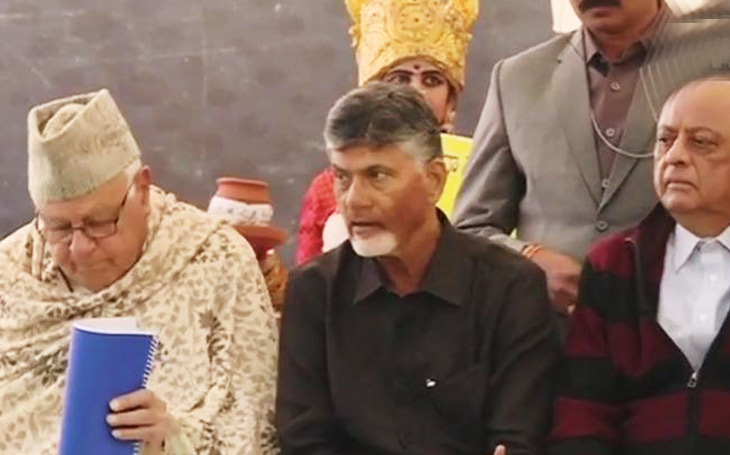 10 pm:Â We were denied permission to stage a protest in Parliament premises. So, we came here, says the TDP chief.

9.59 am:Â I am warning you. Donâ€™t make personal attacks against me and my people. Itâ€™s unwarranted. I am just doing my duty as the head of my state. We are only demanding what we were promised, says the Andhra chief minister.

9.57 am:Â On behalf of five crore people, Iâ€™m warning this government... I came here to remind you of the promises made in the AP Reorganisation Act, Naidu says.Â

9.45 am:Â If you won't fulfil our demands, we know how to get them fulfilled. This is about self respect of people of Andhra Pradesh. Whenever there is an attack on our self-respect, we won't tolerate it. I am warning this government and particularly the PM to stop attacking an individual.

9.30 am: Today we have came here, all the way, to protest against the central government. Yesterday, PM visited Guntur, just a day before the dharna. What is the need, I am asking, says Chandrababu Naidu.

Naiduâ€™s protest comes a day after Prime Minister Narendra Modi launched a scathing attack on him in a rally in Andhra Pradesh's Guntur. PM Modi accused Naidu of betraying his father-in-law NT Rama Ram, the founder of TDP and the founder chief minister of Andhra Pradesh and also said that Naidu was scared this time because has never won successive elections.

He also said that Naidu made a "U-turn" on promises of development to the state and was only trying to replicate the NDA government's schemes. â€œOur government gave to Andhra Pradesh much more than what was mentioned in special status. CM of Andhra Pradesh acknowledged this package but took a U-turn as they failed to use the funds in the appropriate way and were not able to develop the state," PM Modi said at the public rally in Guntur on Sunday.

Naidu walked out of the Bharatiya Janata Party-led National Democratic Alliance (NDA) in March last year, after the Centre refused to accept its demand for a special category state status for Andhra Pradesh and compensate for the losses suffered from the creation of a separate Telangana state in 2014.