On Wednesday, The EC Has Banned The Release Of The PM Narendra Modi Biopic, Saying Any Such Film That Subserves Purpose Of Any Political Entity Or Individual Should Not Be Displayed In The Electronic Media.

A day after banning the screening of the biopic on Prime Minister Narendra Modi during the poll period, the Election Commission of India on Thursday barred NaMo TV from airing any political content without getting an approval by the media certification and monitoring committee (MCMC), strictly in accordance with its instructions regarding the same.

In its letter to the Delhi Chief Electoral Officer, the chief of MCMC, the Election Commission also directed it to remove all the existing content, promoting Prime Minister Narendra Modi and the BJP ahead of the Lok Sabha Elections 2019 scheduled to be held between April 11 and May 19.

"As NaMo TV/Content TV is sponsored by a political party, all recorded programmes of political contents displayed on the channel/platform would be covered under the purview of the Commission's Order... " the letter read.

"Any political publicity materials/contents, being displayed on electronic media without the requisite certification from competent authotity (MCMC in this case) should be removed immediately and any political content shall only be permitted strictly in accordance with the ECI instructions in this regard," it added. 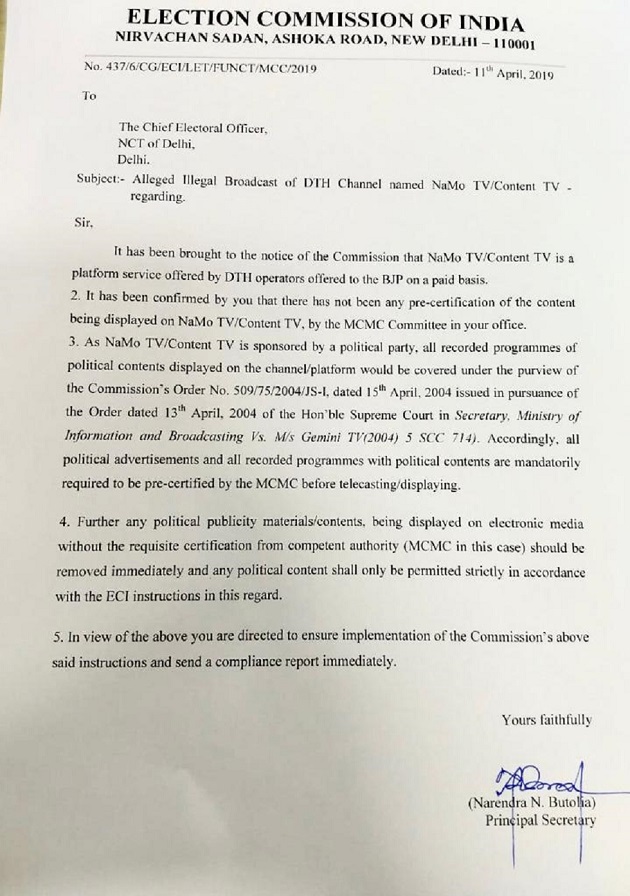 Early in the day, the officials in Delhi Chief Electoral office informed the Commission that it did not "certify" the content on NaMo TV, since it had old speeches of Prime Minister Narendra Modi.

"The Delhi poll body approved the logo of NaMo TV but the content that was submitted for certification had old speeches of the prime minister and it was felt that since they have already been aired, they did not require pre-certification," an official, privy to the development, said.

After the Congress filed a complaint with the poll panel about the channel disturbing the level playing field, the EC had asked the CEO Delhi to file a report on the issue. The BJP, however, has said that NaMo TV is part of NaMo app, which is a digital property owned and run by it, according to the party's IT Cell head Amit Malviya.

On Wensday, the EC has banned the release of the PM Narendra Modi biopic, saying any such film that subserves purpose of any political entity or individual should not be displayed in the electronic media.

Last week, the poll panel had also issued a notice seeking a report from the I&B Ministry on NaMo TV, launched just weeks ahead of general election, after opposition parties, including the Congress, asked the poll body to direct the ministry to suspend the channel in violation of the Model Code of Conduct.

In its response, the Information and Broadcasting Ministry is learnt to have responded that the NaMo TV is an advertisement platform launched by DTH service providers which does not require government nod.

The ministry is also learnt to have said that NaMo TV is not a regular channel and it does not figure in the official list of approved channels of the I&B Ministry. As per the existing norms, no approval is required from the ministry to run such advertising platforms, the I&B ministry is learnt to have told the poll panel.