With the 2019 Lok Sabha Elections just one month to go, the Nationalist Congress Party (NCP) on Friday released its second list of 5 candidates, with party chief Sharad Pawar's grandson Parth Ajit Pawar being fielded from the parliamentary constituency of Maval in Pune. Parth is the son of former Maharashtra deputy chief minister Ajit Pawar - the nephew of three-time chief minister Sharad Pawar. After the second list, the total number of declared candidates for the NCP has reached to 17.

The development came days after party chief Sharad Pawar on Monday announced his decison to not contest the Lok Sabha Elections 2019, adding that he is dropping out for his nephew Ajit Pawar's 28-year-old son Parth, who would contest from Maval.

Apart from Pawar, the other candidates who has found place in the second list of the NCP, includeÂ Dhanaj Haribhau Mahale (Dindori), Sameer Bhujbal (Nashik), Amol Kolhe (Shirur) and Bajrang Sonavane (Beed). 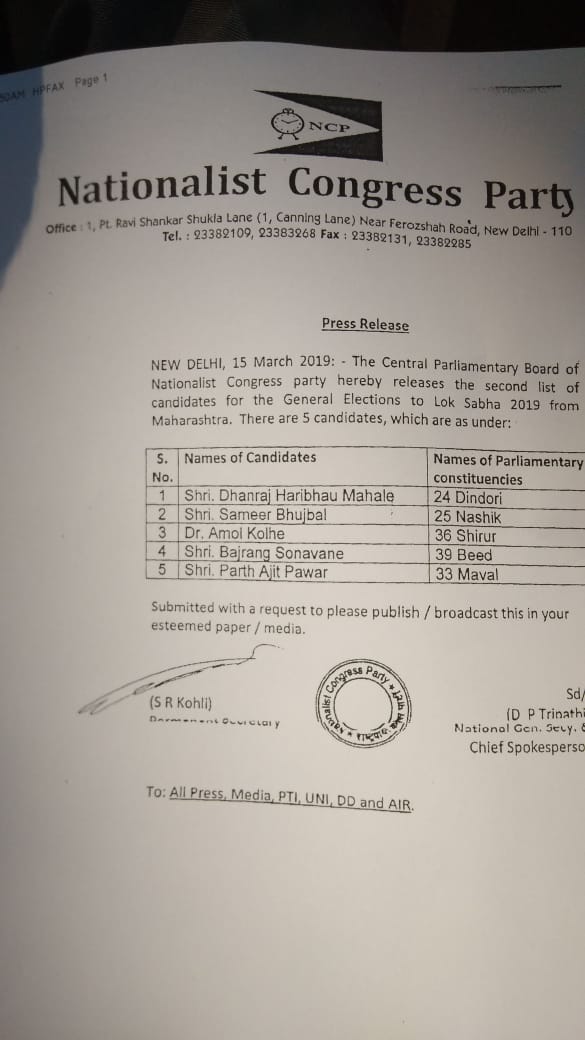 Earlier on Thursday, the NCP declared its first list of 12 candidates for the ensuing Lok Sabha polls and fielded senior party leader and Sharad Pawar's daughter Supriya Sule from its stronghold of Baramati. The party has also given ticket to Mohammad PP Faizal from Lakshadweep.

Besides, it has decided to field sitting MPs Udayanraje Bhosale and Dhananjay Mahadik from Satara and Kolhapur, respectively. The other candidates include Anand Paranjpe (Thane) and Sanjay Dina Patil (Mumbai Northeast).

The name of Swabhimani Shetkari Sanghtana leader Raju Shetti, whose party left the NDA and joined the UPA, also figures in the NCP's list.