Addressing An Election Rally In Deoria, Priyanka Claimed That No Development Works Were Carried Out In Varanasi In The Last Five Years, Adding That Its Development Can Be Seen Only In Advertisements.

In a big show of strength in Uttar Pradesh's Varanasi, the Lok Sabha constituency of Prime Minister Narendra Modi, Congress general secretary Priyanka Gandhi Vadra hold a mega roadshow on Wednesday evening. Accompanied by Ajay Rai, the Congress candidate for the Varanasi seat, Gandhi began her roadshow by garlanding the statue of Madan Mohan Malviya at the gates of the Banaras Hindu University.

The younger Gandhi and other leaders, including Chhattisgarh Chief Minister Bhupesh Baghel, waved at the large crowd as the procession wound its way through Varanasi roads. Congress workers raised anti-Modi slogans along the route. The Congress show of strength comes nearly three weeks after PM Modi held his own roadshow in the temple town, a day before filing his nomination papers.

The local unit of the Congress had made elaborate arrangements to pull in the crowds for the roadshow, a party leader said. Like Modi's roadshow, Priyanka Gandhi's event is scheduled to end at the Dashashwamedh ghat. Post that, she will be offering prayers, first at the Kashi Vishwanath temple and then at the Kaal Bhairav temple in Kotwali area.

Early in the day, the Gandhi scion stepped up her attack at the Modi-led BJP dispensation, saying it is not a 'mazboot' government but a 'magroor' one that harbours an "oppressive" mindset.

Addressing an election rally in Deoria, Priyanka claimed that no development works were carried out in Varanasi in the last five years, adding that its development can be seen only in advertisements. She drew a quick comparison between the work done in Amethi by former prime minister Rajiv Gandhi and that by Modi in his Varanasi constituency.

"I began my campaign with Ganga Yatra and reached Varanasi. I was under the impression that there will be huge development in Varanasi but there were deep ditches on the road and development was nowhere to be seen," Priyanka claimed.

"When I went to Amethi, I was just 10 years old and my pitaji (Rajiv Gandhi) was an MP with the Congress having its government both at the Centre and state. Within five years, I saw huge development there," she added. 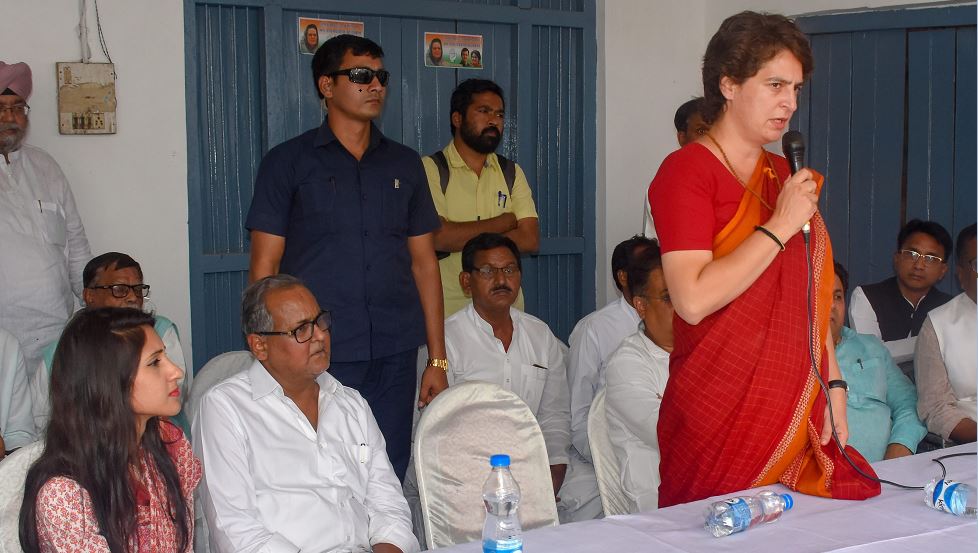 Moving on to the farmers' sufferings across the country, the Congress general secretary said, "PM Modi has lost his connect with people. He has a 56-inch chest then why the condition of farmers in the country is pathetic. You might have seen him in China, Japan and in Pakistan enjoying Biryani but have you ever seen him visiting a poor man's house when he is in problem?".

Expressing her concern over rising incidents of farmer suicides, Priyanka said 11,000 farmers have committed suicide in the last five years but the Modi government is silent on the issue.

"Farmers reached at his door step to tell him about their problems but he did not even come out of his grand bungalow," she said. "It (Modi government) waived off huge loans of industrialists and I want to ask why it did not waive off loan of farmers on the same line," she said.

Recalling her family's connect with Deoria, she said, "This is the land of Devraha Baba and my grandmother used to respect him. Baba always gave message of peace and love".

General Election to the politically crucial Varanasi parliamentary constituency is scheduled to be held in the last phase of Lok Sabha elections on May 19. The counting of votes for seven-phase Lok Sabha polls will be taken up on May 23.