Bharatiya Janata Party (BJP) and other political parties are battling it out with powerful regional rivals which is being considered to be close fights as per political analysts. 2019 Lok Sabha elections are being conducted in seven phases starting from April 11 to May 19. However, the result is scheduled to be announced on May 23, News Nation Exit Poll has predicted the mood of voters of Punjab ahead of the official results.

As per News Nation's Exit Poll, BJP to lose one seat and settle with five seats only while Congress is expected to win seven seats and AAP to win just one seat

5:30 pm: The voting for all the 13 Lok Sabha seats in Punjab is being held in the last and seven phases of polls along with 13 seats in Uttar Pradesh, nine in West Bengal, eight seats each in Bihar and Madhya Pradesh, four in Himachal Pradesh, three in Jharkhand and one seat of Chandigarh.

5:35 pm: Apart from the final phase of Lok Sabha elections, a bypoll is also being held in Panaji, which was necessitated due to the death of former Goa Chief Minister Manohar Parrikar. Bye-elections will also be held in four assembly constituencies of Tamil Nadu – Sulur, Aravakurichi, Ottapidaram (SC) and Thiruparankundram.

5:40 pm: The Election Commission has set up more than 1.12 lakh polling stations for smooth conduct of polls in which over 10 crore voters are expected to exercise their franchise to decide the fate of 918 candidates.

5:45 pm: Talking about some of the key contests in the state of Punjab in 2019 Lok Sabha polls which includes:

6:15 pm: The exit poll results for the state of Punjab is to be announced shortly. 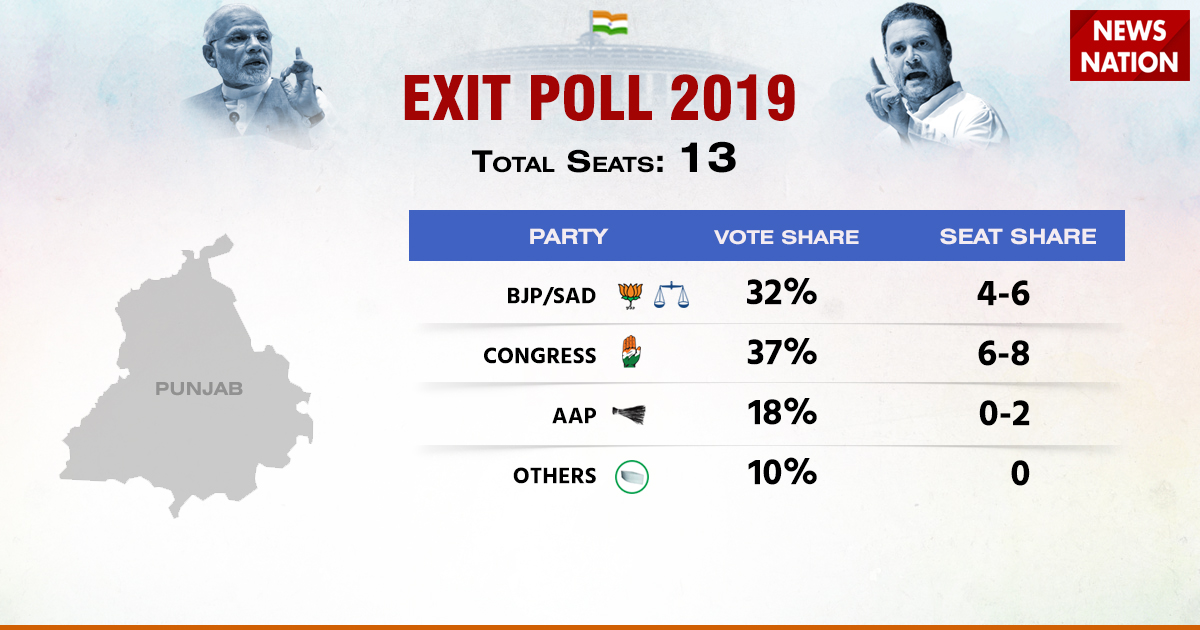 19:52 pm: As per Times Now Exit Poll, NDA to win three seats while UPA likelt to win 10 seats in Punjab

According to News Nation Exit Poll, Congress is likely to get 6-8 seats while BJP/Akali alliance may win 4-6 seats in Punjab#ExitPollWithNewsNation#ElectionsWithNewsNation