Punjab Is One Of The Five Congress-governed States Across The Country. Captain Amarinder Singh Has Been Ruling The State Since 2017.

As political ardour is gaining pace ahead of the Lok Sabha elections across India, News Nation has conducted an opinion poll to gauge the voting intention across the country. To get an idea of the people's mood in Punjab, our team has travelled across all the 13 Lok Sabha seats in the state and asked several questions including their top choice for prime minister's post and the standard of living they had during the tenure of Modi-led BJP government since 2014.

As per the News Nation poll survey, the BJP may win 5 seats while the Congress is predicted to retain its stronghold with wins in 7 Lok Sabha constituencies in the state. The survey shows a major worry for the Arvind Kejriwal-led Aam Aadmi Party (AAP) as it has been projected to decrease its tally from 4 to 1.

As far as the vote share is concerned, the News Nation Opinion Poll gives 35 per cent vote share to the Congress followed by the BJP (32%) and the AAP (18%). 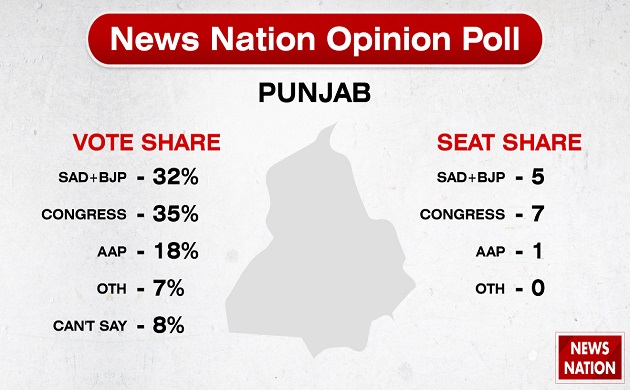 Talking about major poll issues in 2019, the Kartarpur Corridor, India-Pakistan tension and Panthic (religious) votes will play a key role in the parliamentary seats along the international border in Punjab.

Other factors which will be significant in the 2019 General Elections in Punjab include corruption, drug abuse, inflation, unemployment, GST-Demonetisation, list of achievements and developmental works of the existing government, the politically sensitive Rafale fighter jet deal and farmers' issue among others.

Punjab is one of the five Congress-governed states across the country. Captain Amarinder Singh has been ruling the state since 2017.

In 2014 Lok Sabha Elections, the BJP increased its tally from 1 to 2 but suffered a jolt as its senior leader Arun Jaitley lost to Congress leader Amarinder Singh in Amritsar. The Shiromani Akali Dal (SAD) – the BJP ally in the state registered win in 4 seats while the Congress had to be content with just 3 seats.  The Aam Aadmi Praty (AAP), on the other hand, made an impressive debut with wins in 4 seats in Punjab.