Rahul on News Nation Highlights: I have no personal enmity with PM Modi, fighting against his ideology

In A Big Statement, The Gandhi Scion Has Admitted That The Decision Of Emergency For A 21-month Period Between 1975 And 1977 Was A Big Mistake And Even His Grandmother Indira Gandhi Had Apologised For It.

Can the change of governance give India a new direction and ideology? Is Congress fooling the people of India by showing them false dreams in its election manifesto? What is the controversial Rafale allegations on Prime Minister Narendra Modi-led BJP government? - Congress president Rahul Gandhi, in an exclusive interview to News Nation's Deepak Chaurasia and Ajay Kumar, on Monday opened up on these wide range of issues concerning the nation today. The Gandhi scion has also criticised the party's Indian Overseas chief Sam Pitroda for his controversial 'Hua so Hua' remark on 1984 anti-Sikh riots. Other important factors, the Congress chief spoke about, include the 1975 Emergency, imposed by former prime minister Indira Gandhi, the implementation of GST and demonetisation by the BJP-led dispensation, the ideology of the Rashtriya Swayamsevak Sangh (RSS), and the ongoing Lok Sabha elections 2019, which is scheduled to end on May 19.

Here are the Highlights on Rahul Gandhi’s super exclusive interview with News Nation:

Ajay Kumar: Narendra Modi ji says that ask the "sarve sarva" if his family did not impose the Emergency.

Deepak Chaurasia: On your announcement of Rs 72,000 per year under NYAY scheme, PM Modi said during his interview that they have track-recorder while Congress has tape-recorder.

Rahul Gandhi: May 23 will decide who has delivered what. Narendra Modi delivered note ban, Gabbar Singh Tax, he demolished the economy which was the strength of the nation. He did not deliver 2 crore jobs to youth, Rs 15 lakh that he promised, adequate prices to farmers, farm loan waiver. He delivered Rs 30,000 crore to Anil Ambani. He waived off loans worth Rs 5,55,000 crore given to 15 people. Arun Jaitley met Vijay Mallya before he fled to London. You called Mehul Choksi and Anil Ambani ‘bhai’, you delivered for them.

Ajay Kumar: You hugged PM Modi in the Parliament and the camera also caught your wink. It was then compared to Priya Varrier’s wink. What led you to do that because such things are unusual in the Parliament.

Rahul Gandhi: I was listening to Prime Minister’s speech and he had so much hatred in his heart about me, my family and the Congress. I was not caching the anger thrown at me. I had love in my heart, I did not accept the gift of hatred from him. I gave him the gift of love and hugged him. I don’t hate Narendra Modi. Narendra Modi is an ideology and I am fighting it. I have no personal enmity with him.

Deepak Chaurasia: BJP has alleged that the Congress was responsible for the 1984 anti-Sikh riots. Do you agree with it?

Rahul Gandhi: I have said that whatever happened was wrong. Law should be implemented and whoever did violence and hurt people must be punished.

Rahul Gandhi: There cannot be ‘hua so hua’. I have clearly  told Sam Pitroda to say sorry and apologise for his statement. He should not have said this.

Ajay Kumar: BJP has alleged that you are fighting from Wayanad where Hindus are minority. 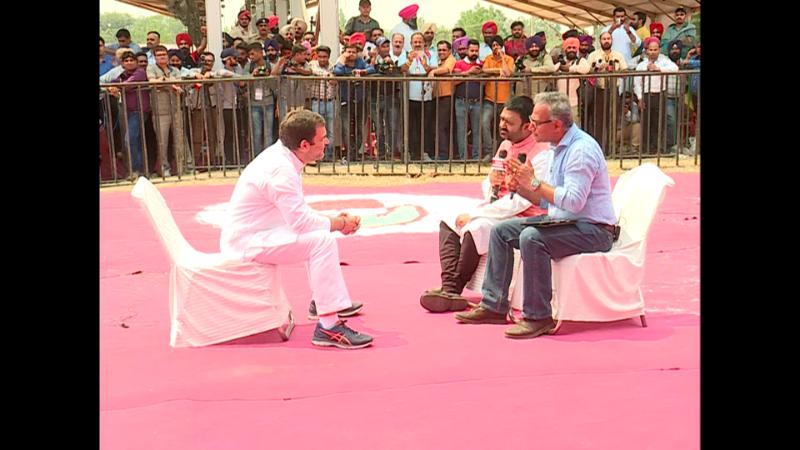 Ajay Kumar: When Pragya Thakur’s name was announced as a BJP candidate, then there was a statement by PM that you have linked the Hindu with terrorism.

Rahul Gandhi: Terrorism cannot be linked with any religion. Religion and terrorism are two different things. I have never said this.

Deepak Chaurasia: Matter is sub-judice. How can an inquiry be ordered in such a case.

Deepak Chaurasia: If Congress or any non-BJP government comes to power at the Centre, will the Rafale deal be negotiated or the offset partner be changed?

Rahul Gandhi: There will be no witch-hunt. Inquiry will be held and culprits will be Punished. Before cancelling the contract, we will have to ask the Defence officials. PM is not ordering an inquiry because he knows that something wrong has been done in the deal.

READ | PM on News Nation: Why is media silent over violence in West Bengal?

Ajay Kumar: Narendra Modi has questioned the Congress manifesto. He has said that the Congress is fooling the people by showing them false dreams.

Rahul Gandhi: Narendra Modi speaks what he has in his heart and what he himself does. The Congress manifesto has a small picture of me and another of Congress, along with the picture of the people all over it. This is our philosophy. It has been prepared after talking to people. Whether it is about farmers, labourers, NYAY scheme or Rs 3,60,000 in five years. Narendra Modi told a lie of Rs 15 lakh. 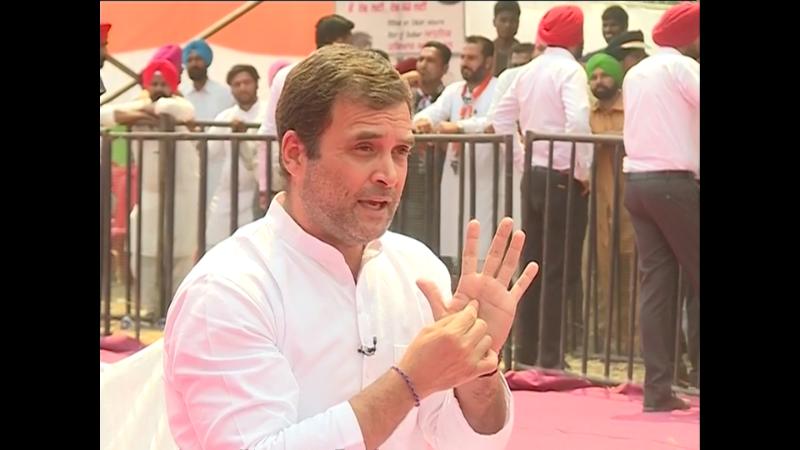 I will ask him four questions on Rafale – 1. Narendra Modi told French president that the contract should be given to Anil Ambani. Modi ji said jets should not be manufactured in India. HAL has been manufacturing jets for the last 70 years. It manufactured Mig, Jaguar, Mirage and PM says HAL can’t be given the contract. PM Modi tells French President that jet worth Rs 526 crore will be bought for Rs 1,600 crore.

The Hindu, in its report, said the defence ministry officials said in their official document that the prime minister held parallel negotiations. Parrikar ji said he knew only about the first contract with HAL and has now idea about the Rs 1600-crore deal.

If Narendra Modi ji had not stolen in the deal, he would have said that he will order an inquiry in five minutes. But in the last three years, Narendra Modi has neither come for a debate nor ordered an inquiry. Because "chowkidar ne chori ki hai".

Deepak Chaurasia: During the interview, nowhere did Modi ji refer to the note pad.

Deepak Chaurasia: Priyanka Gandhiji during her Delhi roadshow said that now elections should be fought on the issues of demonetisation and GST. News Nation had asked this question to Narendra Modi during an interview two days ago. He said that election on the issue of demonetisation has been fought in Uttar Pradesh and we won it with 3/4th majority. Congress fought the Gujarat Assembly elections on GST and we won all the seats in Surat. And now elections are being fought on the basis of work done in the last five years.

Rahul Gandhi: Did this answer come from Modi ji’s memory or from the note sheet he had in his hand. The truth is the youth of the nation is talking about unemployment, corruption, farmers’ plight and the attack Narendra Modi ji carried out with demonetisation and GST. And it will come out clear on May 23. It will be clear on what issues the election has been fought.

READ | PM on News Nation: Not only Pulwama, Opposition will blame me even for a pothole in Pune

Ajay Kumar: Modiji claims that the Congress has damaged all the Constitutions since the very beginning.

Rahul Gandhi: The Congress never sidelined the RBI. Never during the Congress rule, four judges of the Supreme Court came out in public and said that an "external force” is stopping us from working. Whom where they talking about? They took Judge Loya’s name. It is obvious that “external force" is Narendra Modi.

Modi ji damaged the Planning Commission, Election Commission, RBI. Congress never did this. Even if the Congress want to, it cannot. The reason is the system of the Congress is not like that of the RSS. Congress' system is now of control, indeed it is very chaotic. Congress first listens and then works. RSS speaks, RSS is an instrument of advertisement. RSS does not think, it is an amplifier. 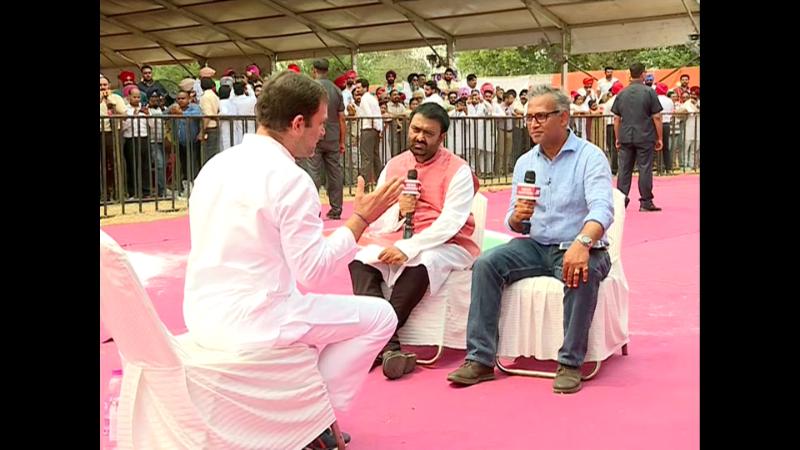 Congress fought the most important war of freedom.

Ajay Kumar: You want to change the nation's ideology, you want to give a new direction to India? But can this be done only with a change of governance?

Rahul Gandhi: We want to form the government on the basis of nation's ideology which is of love, brotherhood, justice and moving together. In the last five years, Modiji ran the government single-handedly, without listening to anyone.

We want to listen to the nation’s voice and run the government accordingly. There should not be a government run by one man.

READ | PM on News Nation: Will personally go and honour a journalist who questions Opposition on Rafale

What did Rahul Gandhi say about his apology to the Supreme Court over 'Chowkidaar Chor Hai' remark? Watch Rahul Gandhi's exclusive interview today at 9 pm only on News Nation.

Was Congress party responsible for the anti-Sikh riots in 1984? Does terrorism have a religion? Join us using #RahulOnNewsNation to get the answer of these burning questions today at 9 pm.

Gandhi's interview with News Nation comes at a time when India awaits the May 23 Lok Sabha verdict following the conclusion of 39-day-long General Elections on May 19. Watch full interview at 9 pm only on News Nation.

In a big statement, the Gandhi scion has admitted that the decision of Emergency for a 21-month period between 1975 and 1977 was a big mistake and even his grandmother Indira Gandhi had apologised for it. Watch Congress president Rahul Gandhi's SUPER EXCLUSIVE interview with News Nation at 9 pm today.