2019 Lok Sabha Election Analysis: What happened in Rajasthan in 2014 polls? What will happen this year?

Both The Congress And The BJP Will Have A Direct Confrontation In The State In The Upcoming Lok Sabha Elections 2019. The BJP Will Try To Retain Its 25 Seats.

Lok Sabha Elections 2019: The Election Commission of India (ECI) has finally sounded the poll bugle and declared the schedule for the Lok Sabha Elections 2019 on March 10. The Lok Sabha Elections 2019 will be held in seven phases, starting from April 11. The results will be declared on May 23. 91 constituencies will go for polls in the first phase on April 11, followed by 97 constituencies in the second phase on April 18. The third phase will be held on April 23 and fourth on April 29, fifth on May 6, sixth on May 12 and seventh phase on May 19. 115 constituencies will go for polls in the third phase, 71 in the fourth phase, 51 in the fifth phase, 59 in the sixth phase and 59 in the seventh phase. We are also gearing up for the elections and are coming up with a series: 2019 Lok Sabha Election Analysis: What happened in 2014 Lok Sabha Polls? What will happen this year? Let us look at the political scenario in the state of Rajasthan. The Congress is ruling the state now under the collective leadership of Chief Minister Ashok Gehlot and Deputy Chief Minister Sachin Pilot. Gehlot is the chief minister for the third time now after his stints in 1998-2003 and 2008-2013. The BJP lost the Assembly elections recently and Vasundhara Raje had to resign as the chief minister. Raje first became the chief minister in 2003 and again in 2013. In 2014 Lok Sabha elections, the BJP created history by grabbing all the 25 seats in the state. The Congress drew a blank and lost the elections miserably. Several Congress ministers lost the elections. Let's discuss this in detail. Also Read: Lok Sabha Elections 2019: When will you vote? Know poll dates of your seat here

What happened in Rajasthan in 2014 Lok Sabha Elections? 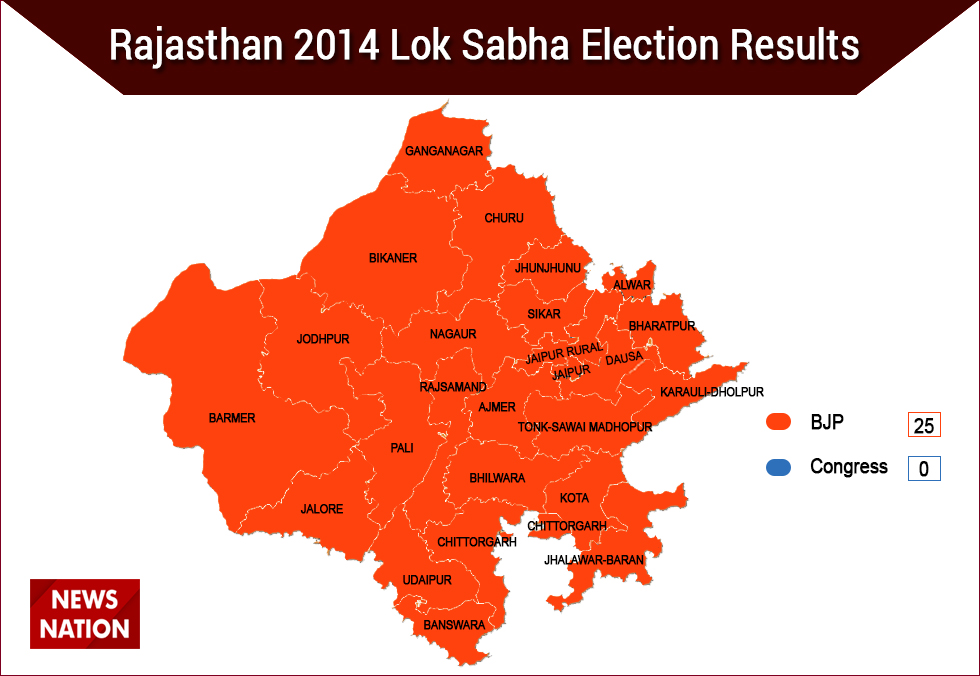 In 2014 Lok Sabha Elections, the BJP defeated the Congress convincingly and won all the parliamentary seats in Rajasthan. The 2014 polls in Rajasthan were held in two phases on April 17 and 24. The state sends 25 members in the Lok Sabha. The BJP received 1,48,95,106 votes with a vote share of 55.61 per cent, while the Congress was able to garner 82,30,164 votes in the state with a vote share of 30.73 per cent. The Bahujan Samaj Party (BSP) got 2.37 per cent of a vote share in the state. According to our analysis, the BJP was ahead in 180 Assembly segments during the 2014 Lok Sabha polls. The Congress was leading on 11 and the NPP on 4. In 2009 Lok Sabha elections, the Congress had registered a thumping victory in the state with 20 seats and the BJP was reduced to just 4 seats. However, this was completely reversed in 2014.

What was the result of Rajasthan Assembly Elections in 2018?

Rajasthan went for Assembly elections along with Madhya Pradesh, Mizoram, Chhattisgarh and Telangana in 2018. The Congress ousted the BJP and won 99 seats in the 200-member strong Assembly with a vote share of 39.30 per cent. The party later increased its tally to 100 in the Assembly after its victory in Ramgarh and touched the halfway mark. The election to the Ramgarh Assembly seat was postponed due to the death of the BSP candidate ahead of December 7 Assembly elections. The Congress received 1,39,35,201 votes in the state. The BJP was able to get 1,37,57,502 votes with a vote share of 38.80 per cent. The party won 73 Assembly seats. So, the vote share difference between both the main parties was a mere 0.50 per cent.

The BSP won 6 seats with a vote share of 4 per cent. The newly-formed Rashtriya Loktantrik Party (RLP) of BJP rebel Hanuman Beniwal received a vote share of 2.4 per cent and won 3 Assembly seats. In 2013 Assembly elections, the BJP registered a massive victory in Rajasthan and won 163 Assembly seats while the Congress was completely decimated with only 21 seats.

What is the current scenario in 2019?
Both the Congress and the BJP will have a direct confrontation in the state in the upcoming Lok Sabha Elections 2019. The BJP will try to retain its 25 seats while the resurgent Congress will challenge it. In 2018 Assembly elections, the Congress was ahead on 12 seats whereas the BJP was leading on 13 Lok Sabha seats. The BJP lost the two Lok Sabha seats at the beginning of 2018 when the party received a thrashing at the hands of the Congress party in Alwar and Ajmer bypolls. BJP MPs Mahant Chand Nath and Sanwar Lal Jat died in the middle of their terms thereby necessitating the bypolls. Jat had defeated Congress heavyweight Sachin Pilot in Ajmer in 2014 and became the minister in the Modi Cabinet. However, the BJP couldn't retain the seat after his death and BJP candidate Ramswaroop Lamba was defeated by Congress leader Raghu Sharma. 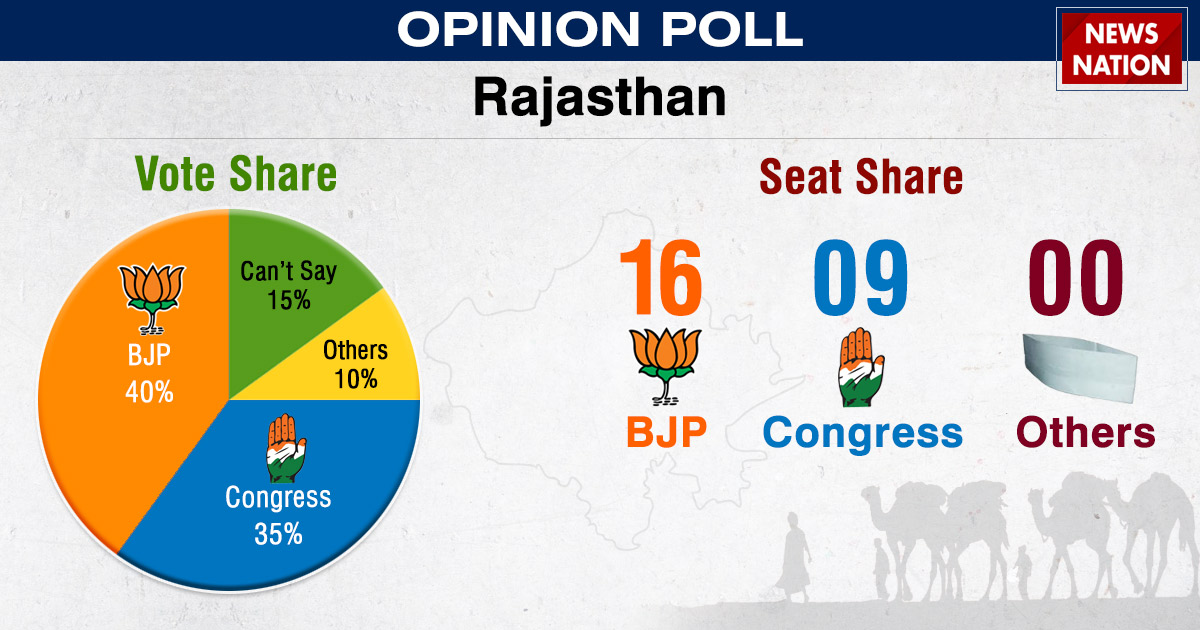 According to a poll, the BJP may not repeat its 2014 performance in Rajasthan but will remain the leading party whereas the Congress is not likely to get the advantage of its state government in capturing the most seats in the state. Prime Minister Narendra Modi has a massive lead over Rahul Gandhi in Rajasthan when the respondents were asked about their favourite Prime Ministerial candidate in 2019. Modi got the backing of 47 per cent people, while only 31 per cent chose Rahul Gandhi.