Our Right Our Strength !! Everyone Must Step Out N Vote ... We Need All Support, To Create A Combined Future For Our Loved Ones, N For A Secular, Safe, Productive Future For Our Country, Vadra Tweeted.

Robert Vadra, the brother-in-law of Congress president Rahul Gandhi, on Sunday cast his vote in Delhi in the sixth phase of the 2019 Lok Sabha elections. Following the new trend, Robert Vadra, tweeted a picture of his inked finger and urged voters to step out and vote.

"Our right our strength !! Everyone must step out n vote ... we need all support, to create a combined future for our loved ones, n for a secular, safe, productive future for our country," Vadra tweeted. 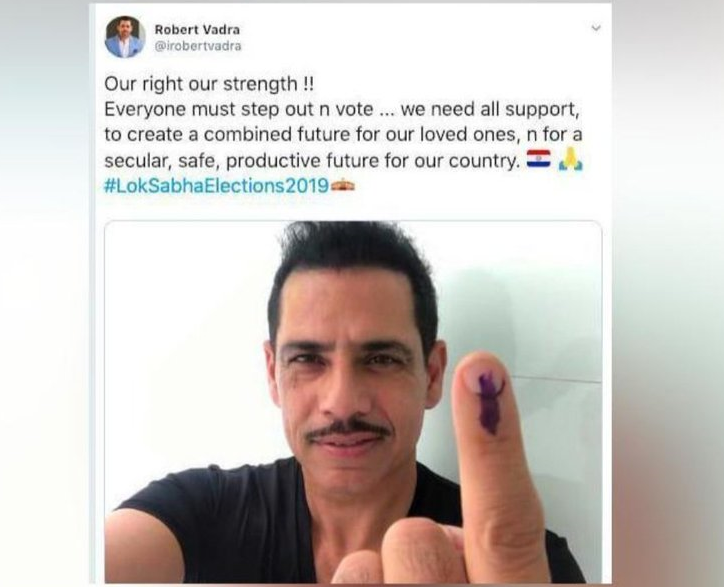 At a first glance, the tweet looked fine, but till Vadra ended up posting an emoji of the Paraguay flag instead of the Indian flag. At the end of his tweet was the emoji of the red and blue Paraguayan flag.Â

Soon people started trolling him, pointing out his mistake. Vadra tried to make amends by tweeting out a second post with the Indian tricolour. However, by then, the damage had been done.The original post was deleted, but screenshots of the tweet continued to circulate on social media. The Paraguayan flag also began trending on Twitter.

In February, days after Priyanka Gandhi entered active politics, Vadra had indicated that he was ready for a â€œlarger role in serving the peopleâ€.Â In a Facebook post, Vadra wrote: â€œThe years n months that I spent campaigning n working in different parts of the country, but mainly in UP, gave me a feeling to do more for the people n make smaller changes possible by me, in their areas n when they got to know me, the genuine love, affection n respect I earned was humbling ... All these years of experience n learning cannot be just wasted and should be put to better use... once all these accusations n allegations are over, IÂ feel I should dedicate a larger role in serving the people...."

Delhi recorded a voter turnout of 60 per cent on Sunday, down from 65 per cent in 2014, in a three-cornered Lok Sabha contest among the BJP, the AAP and the Congress, with instances of EVM glitches and missing voter names reported from various areas.