A Total Of 23 Candidates Out Of 37 In The State Have Been Announced So Far By The Party.

The Samajwadi Party (SP) released another list of three more candidates in Uttar Pradesh for the Lok Sabha Elections2019 on Tuesday, fielding Devendra Yadav from Etah, Hemraj Verma from Pilibhit, Anand Sen from Faizabad. A total of 23 candidates out of 37 in the state have been announced so far by the party. Hemraj Verma will take on Bharatiya Janata Party's (BJP) Varun Gandhi, who has been given the ticket from Pilibhit on Tuesday. 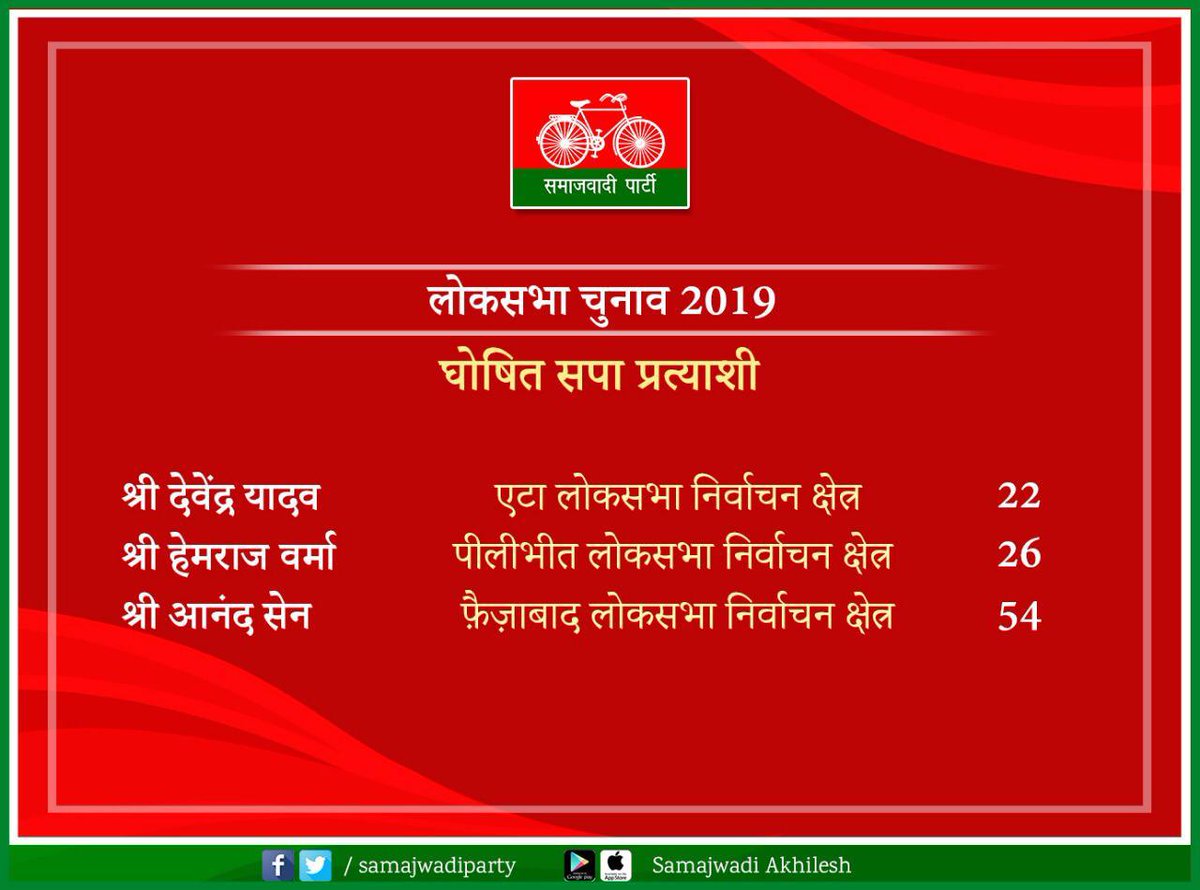 Seventy-nine-year-old SP patriarch Mulayam Singh Yadav was nominated earlier to fight from the "safe seat" of Mainpuri this time.

The SP founder who was left out by the party from its list of 40 "star campaigners" on Saturday, meanwhile, was included in it on Sunday after the omission caused a flutter in political circles, with Uttar Pradesh Chief Minister Yogi Adityanath ruing the omission and terming it as an "irony."

Mulayam Singh's younger brother Shivpal Yadav, who has floated a new political outfit, Pragatisheel Samajwadi Party (Lohia), following differences with his nephew Akhilesh Yadav, too reacted to the omission saying the SP founder has been "ignored" by the party.

The party's list of 40 "star campaigners", sent to the Election Commission on Saturday, had no mention of the SP patriarch's name in it. But the SP revised the list on Sunday and mentioned Mulayam Singh's name on the top of it before sending it to the poll panel.

The SP had been announcing its candidates for various seats in ones and twos after releasing the first list on March 8, nominating its founder Mulayam Singh Yadav from Mainpuri seat, besides a few others.

The socialist stalwart presently represents Azamgarh Lok Sabha constituency, which he had won in 2014 elections along with Mainpuri seat, which he had represented thrice earlier in 1996, 2004 and 2009.

Akhilesh Yadav's wife Dimple Yadav, who is presently a second-term Lok Sabha MP from Kannauj, will be contesting to retain her present seat. The other prominent party leaders whose candidatures have been declared include Akhilesh Yadav's cousins, Dharmendra Yadav and Akshay Yadav.

Dharmendra Yadav, a third-term MP from Badaun and the son of Mulayam Singh Yadav's elder brother Abhay Ram Yadav, too will be contesting to retain his present seat.

So will be Dimple Yadav, the son of SP patriarch's cousin Ram Gopal Yadav. Dimple Yadav is a first-time MP from Firozabad. The Samajwadi Party and the Rashtriya Lok Dal have forged a pre-poll alliance led by BSP chief Mayawati in Uttar Pradesh for the April-May general elections.

While the Samajwadi Party is slated to contest 37 of the 80 Lok Sabha seats in UP, the BSP will fight on 38 seats and the RLD on three.

The UP tripartite alliance has left two seats of Amethi and Rae Bareli for the Congress. The seven-phase general elections in the state is to start from April 11 and will last till May 19.

The Samajwadi Party and the BSP will hold a series of joint rallies for the Lok Sabha polls, with the first one slated for April 7 at Deoband in Saharanpur district of the state. It will be addressed by all three chiefs of the tripartite alliance - Akhilesh Yadav, Mayawati and Ajit Singh.

There will be several other joint rallies in the state with all the three parties' chiefs slated to address them together.