2019 Lok Sabha Election Analysis: What happened in Sikkim in 2014 polls? What will happen this year?

The SDF Again Won The Comfortable Majority In Sikkim In The 2014 Assembly Elections. But The SKM Became The Major Opposition Party To Challenge The SDF's Supremacy In The State.

Lok Sabha Elections 2019: The Election Commission of India (ECI) has finally sounded the poll bugle and declared the schedule for the Lok Sabha Elections 2019 on March 10. The Lok Sabha Elections 2019 will be held in seven phases, starting from April 11. The results will be declared on May 23. 91 constituencies will go for polls in the first phase on April 11, followed by 97 constituencies in the second phase on April 18. The third phase will be held on April 23 and fourth on April 29, fifth on May 6, sixth on May 12 and seventh phase on May 19. 115 constituencies will go for polls in the third phase, 71 in the fourth phase, 51 in the fifth phase, 59 in the sixth phase and 59 in the seventh phase. We are also gearing up for the elections and are coming up with a series: 2019 Lok Sabha Election Analysis: What happened in 2014 Lok Sabha Polls? What will happen this year? Let us look at the political scenario in the state of Sikkim. The Sikkim Democratic Front (SDF) under Chief Minister Pawan Kumar Chamling has been ruling the state since 1994. Chamling is the longest-serving chief minister of any state in India and he will try to win his sixth straight term in the state. The SDF defeated Nar Bahadur Bhandari's Sikkim Sangram Parishad (SSP) in the 1994 Assembly elections and never looked back after that. The party won 1999, 2004, 2009 and 2014 Assembly elections also. There is only one Lok Sabha seat and 32 Assembly seats in Sikkim. Let's discuss this in detail. Also Read: Lok Sabha Elections 2019: When will you vote? Know poll dates of your seat here

Lok Sabha Elections 2019: When will Sikkim vote?
The state will go for state elections for the 32-member Assembly along with the lone Lok Sabha seat on April 11. Odisha, Andhra Pradesh and Arunachal Pradesh are the other states which will have both the elections simultaneously.

What happened in Sikkim in 2014 Lok Sabha Elections? 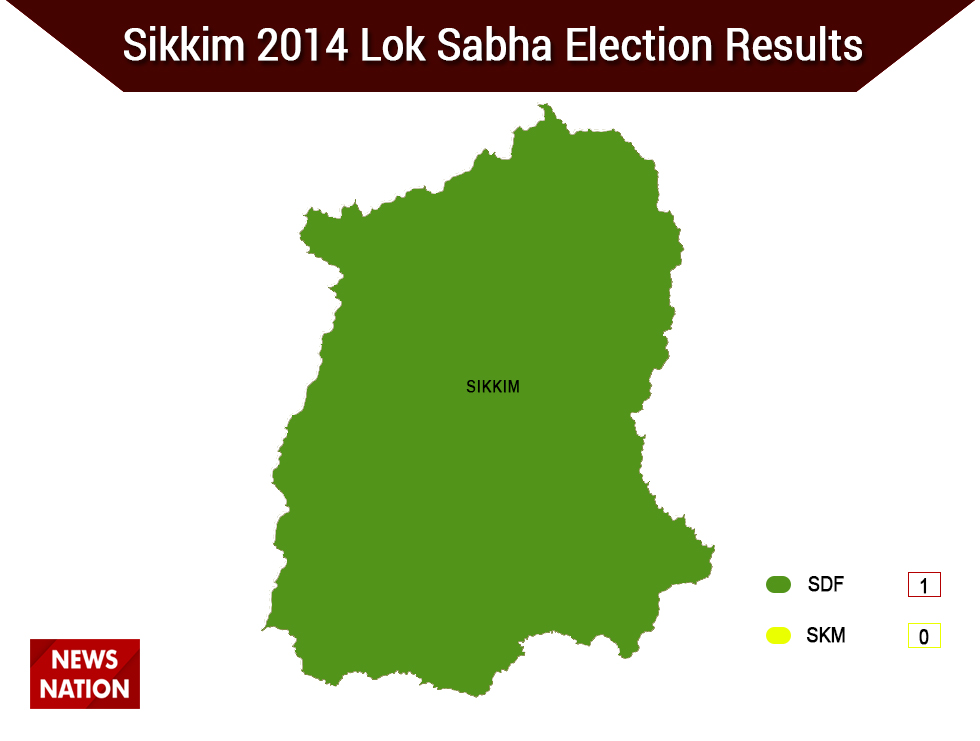 SDF candidate Prem Das Rai defeated SKM's Tek Nath Dhakal by 41,742 votes and retained his seat. Rai won the seat in 2009 also when he defeated the Congress candidate. The SDF has been winning the seat since 1996 Lok Sabha elections. In 1996, 1998 and 1999, SDF's Bhim Prasad Dahal won the prestigious seat for the party. In 2004, the seat was won by SDF's Nakul Das Rai. Meanwhile, Bhaichung Bhutia's Hamro Sikkim Party is also in the fray this time.

What was the result of Sikkim Assembly Elections in 2014?
The Sikkim Assembly elections were held on April 12, 2014. The SDF again won the comfortable majority in Sikkim in the 2014 Assembly elections. But the SKM became the major opposition party to challenge the SDF's supremacy in the state. The party emerged as the prominent force in the state in 2014 with former chief minister Nar Bahadur Bhandari's unconditional support.

The SDF received 1,69,986 votes in the state whereas the SKM got 1,26,024 votes. The BJP and the Congress received just 2,208 and 4,390 votes respectively in Sikkim. Chief Minister Pawan Kumar Chamling was successful from Namchi-Singhithang and Rangang-Yangang constituencies.

What is the current scenario in Sikkim in 2019?
The SDF is a part of the BJP-led North-East Democratic Alliance (NEDA) in the state but the reports suggest that the saffron party is trying to forge an alliance with Bhaichung Bhutia's Hamro Sikkim Party and Sikkim Rajya Manch. Prem Singh Tamang alias PS Golay's SKM formed the alliance with the BJP to contest the Rangang-Yangang bypoll in 2014. However, the BJP candidate lost the bypoll. The bypoll was necessitated after Chamling resigned from the seat and retained his Namchi-Singhithang seat. However, Independent candidate Rup Narayan Chamling won the Assembly bypoll from Rangang-Yangang Assembly constituency in a big jolt to the ruling SDF. Rup Narayan is a brother of the chief minister.

In 2017, SDF candidate Dilli Ram Thapa won the Upper Burtuk Assembly bypoll and defeated the BJP candidate. Chief Minister Chamling recently said that the SDF is planning to field fresh faces in at least 50 per cent seats in the upcoming Assembly polls in the state.

Meanwhile, the BJP has announced its decision to forge an alliance with the Sikkim Krantikari Morcha (SKM) for the upcoming Lok Sabha and Assembly elections. Earlier, SKM president Prem Singh Tamang expressed confidence over their victory, saying the party will "sweep" the upcoming state Assembly elections, as people are fed up of the "corrupt" Sikkim Democratic Front (SDF) government.