The Opinion Poll Conducted By The News Channel Found That The BJP And The Apna Dal May Garner Only 35 Seats In The General Elections Beginning From April 11.

The decision of the Samajwadi Party (SP), the Bahujan Samaj Party (BSP) and the Rashtriya Lok Dal (RLD) to come together in Uttar Pradesh for the Lok Sabha election 2019 could turn out to be a massive setback for the Bharatiya Janata Party (BJP), according the News Nation’s national opinion poll. The opinion poll conducted by the news channel found that the BJP and the Apna Dal may garner only 35 seats in the General Elections beginning from April 11. In the 2014 Lok Sabha elections, the BJP bagged 71 of the 80 seats, surpassing its highest tally of 58 seats in the state which had catapulted the NDA to power in 1998.

On the other hand, the SP, BSP, RLD grand alliance may secure 43 seats, which could be a significant improvement from their last General Elections performance. The SP, BSP and RLD have forged an alliance while elbowing the Congress out of it. The SP-BSP bonhomie won the Lok Sabha by-elections in Gorakhpur, Phulpur and Kairana last year. The Congress led by Rahul Gandhi may only win two seats.

Uttar Pradesh – the politically-sensitive state which sends 80 members to the Lok Sabha – will go to polls in seven phases starting April 11, the Election Commission announced on Sunday. Voting in Uttar Pradesh will be held on April 11, April 18, April 23, April 29, May 6, May 12 and May 19. The counting of votes will take place on May 23. 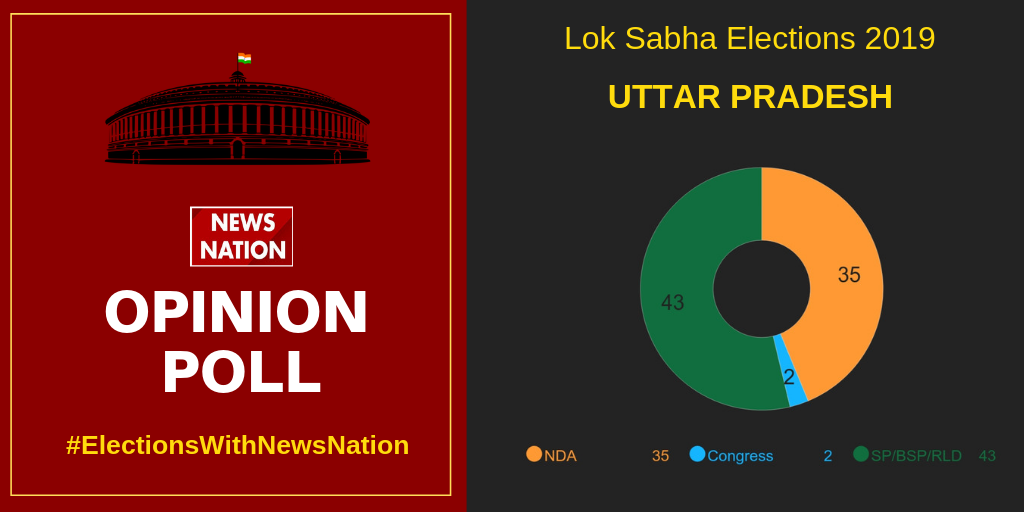 When it comes to vote-sharing, the News Nation opinion poll predicts that the ‘Mahagathbandhan’ (grand alliance) could again do better than the BJP-AD alliance. While the parties of Akhilesh Yadav, Mayawati and Jayant Sinha may win 39 per cent of the votes, Amit Shah-Anupriya Patel alliance may end up with 36 per cent of the total votes. Whereas the Congress may bag only 13 per cent.

The high-voltage elections in the state will see Rahul Gandhi contesting from Amethi and Prime Minister Narendra Modi from Varanasi. Meanwhile, putting rumours of retirement to rest, UPA chairperson Sonia Gandhi will be contesting from Rae Bareli.

The date sheet shows Varanasi constituency voting last on May 19, while a number of high-profile seats, including Amethi and Rae Bareli, will vote on May 6.

Voting in Lucknow, which elected Home Minister Rajnath Singh in 2014, would also vote on May 6 and so will be the case for another high-profile union minister Ram Vilas Paswan's Hajipur constituency.

Among other restrictions, the model code bars the government from announcing any policy move that may impact voters' decision.

The EC said the 'voter verifiable paper audit trail' (VVPAT) will be used in all polling stations this time.