With 2019 Lok Sabha Elections knocking on the door, News Nation travelled across all the 42 Lok Sabha constituencies in West Bengal to gauge the voting intention in the state. As per the News Nation poll survey, the Bharatiya Janata Party (BJP) is likely to improve its tally with Prime Minister Narendra Modi (31%) emerging as the clear favourite for the post of Prime Minister in the state. Congress president Rahul Gandhi, on the other hand, has been relegated to the distant second spot with 17 per cent votes in West Bengal. 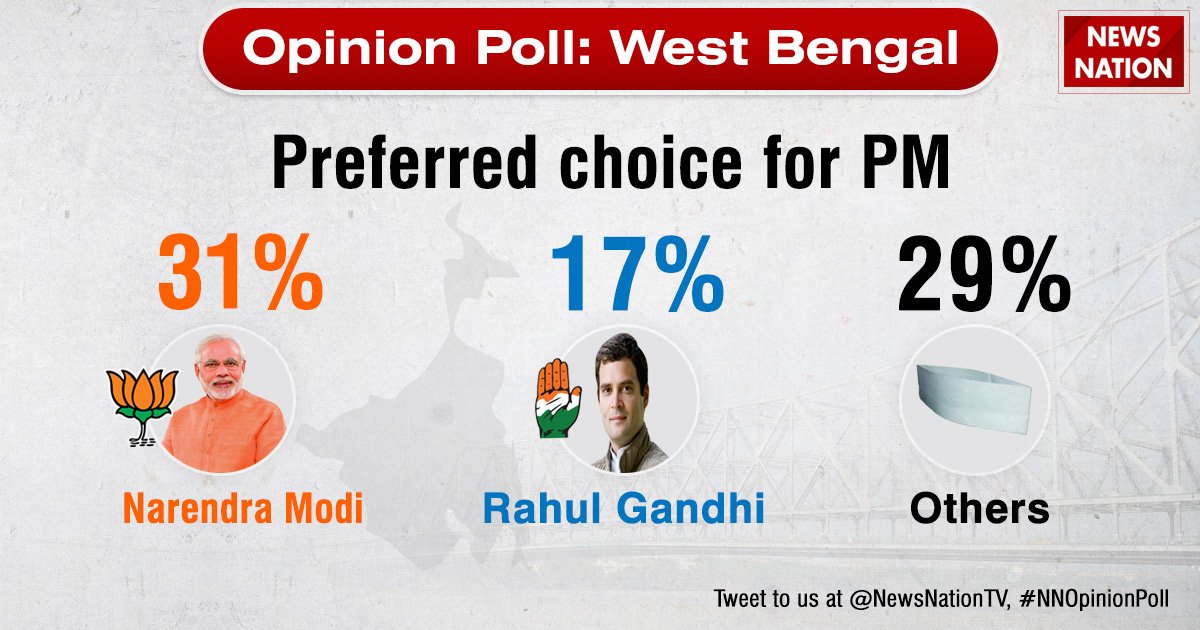 In what could be a big blow to West Bengal Chief Minister Mamata Banerjee, the Trinamool Congress (TMC), which bagged 34 out of the 42 seats in 2014, is likely to loss 3 seats in General Elections 2019. Going by the NN Poll survey, the TMC is projected to get 31 seats where as the BJP and the Congress are likely to bag a total of 7 and 2 seats respectively. The Left Front can get only 2 seats in Lok Sabha Elections 2019. As far as the vote share is concerned, the survey shows that the Trinamool Congress may get 36 per cent votes, followed by the BJP (23%), Left Front (26%), and the Congress (7%).

Being asked about the most important issues in the state, 19 per cent people voted for basic infrastructure, followed by Unemployment (17%), Inflation (12%), Naxalism (11%), Corruption (9%), Illegal migrants (7%), Stable government (5%), Communalism (4%) among others.

In 2014 Lok Sabha Elections, Chief Minister Mamata Banerjee-led Trinamool Congress (TMC) swept the state by bagging 34 of the 42 Lok Sabha seats. While the Congress managed to get 4 parliamentary seats, the BJP gave its best performance by reaching to 2 seats, from 1 in 2009. BJP ministers Babul Supriyo and SS Ahluwalia bagged the Asansol and Darjeeling Lok Sabha constituencies with over 4 lakh votes in the state. The most unexpected swing of the voters was being recorded against the Left Front, which managed to get only two seats in 2014.

General Elections in West Bengal is crucial as this is the third biggest state in terms of Lok Sabha seats after Uttar Pradesh (80) and Maharashtra (48).