2019 Lok Sabha Election Analysis: What happened in Gujarat in 2014 polls? What will happen this year?

There Will Be A Direct Contest Between The BJP And The Congress In The Upcoming 2019 Lok Sabha Elections. The BJP Will Try To Retain All The 26 Seats In The State But The Results Of The 2017 Assembly Polls Were An Eye-opener For The Party.

Lok Sabha Elections 2019: The Election Commission of India (ECI) has finally sounded the poll bugle and declared the schedule for the Lok Sabha Elections 2019 on March 10. The Lok Sabha Elections 2019 will be held in seven phases, starting from April 11. The results will be declared on May 23. 91 constituencies will go for polls in the first phase on April 11, followed by 97 constituencies in the second phase on April 18. The third phase will be held on April 23 and fourth on April 29, fifth on May 6, sixth on May 12 and seventh phase on May 19. 115 constituencies will go for polls in the third phase, 71 in the fourth phase, 51 in the fifth phase, 59 in the sixth phase and 59 in the seventh phase. We are also gearing up for the elections and are coming up with a series: 2019 Lok Sabha Election Analysis: What happened in 2014 Lok Sabha Polls? What will happen this year? Now, let's look at the political scenario in the state of Gujarat. The Bharatiya Janata Party (BJP) has been ruling the state since 1995 (barring the period between 1996 and 1998 when BJP rebels Shankersinh Vaghela and Dilip Parikh became the chief ministers of the state). The Congress party has been out of power since last two decades but performed extremely well in the 2017 Gujarat Assembly elections. BJP's Vijay Rupani became the chief minister for the second time. He replaced Anandiben Patel in 2016. Narendra Modi was the chief minister of the state from 2001 to 2014. In 2014 Lok Sabha elections, the BJP swept the state and won all the 26 parliamentary seats reducing the Congress to a nought. Let's discuss this in detail. Also Read: Lok Sabha Elections 2019: When will you vote? Know poll dates of your seat here

Lok Sabha Elections 2019: When will Gujarat vote?
Gujarat will go for polls in the third phase on April 23. Polling in all 26 Lok Sabha seats will be held in a single phase.

What happened in Gujarat in 2014 Lok Sabha Elections? 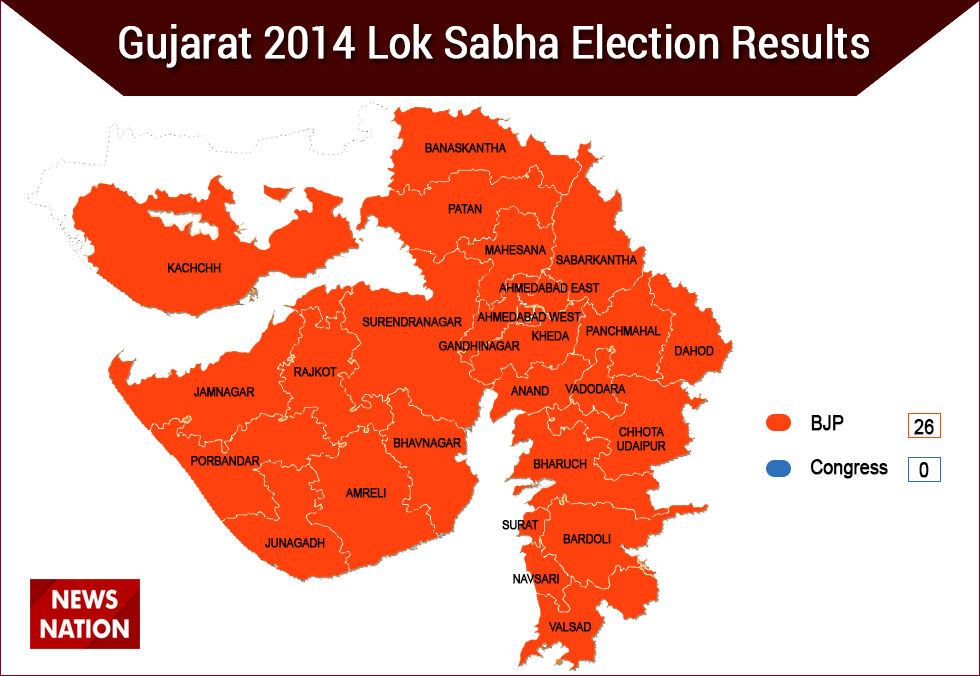 In 2014 Lok Sabha Elections, the BJP for the first time won all the 26 seats in Gujarat. The projection of state's former chief minister Narendra Modi as the NDA's prime ministerial candidate helped the BJP to create an intense wave in Gujarat. The 2014 Lok Sabha polls in Gujarat were held on April 30. The BJP received 1,52,49,243 votes with a whopping vote share of 60.11 per cent, while the Congress was able to garner 84,86,083 votes in the state with a vote share of 33.45 per cent. In the 2009 Lok Sabha elections, the BJP was able to win only 15 seats in the state and the Congress got the remaining 11 seats. So, the saffron party snatched away 11 seats namely Banaskantha, Patan, Rajkot, Surendranagar, Jamnagar, Kheda, Anand, Valsad, Dahod, Bardoli and Porbandar from the Congress in the 2014 Lok Sabha elections. According to our analysis, the BJP was ahead in 165 Assembly segments during the 2014 Lok Sabha polls. The Congress was leading on just 17 Assembly seats.

What was the result of Gujarat Assembly Elections in 2017?

The BJP won the Gujarat Assembly Elections in 2017 but faced a resurgent Congress for the first time in two decades. The BJP was able to win 99 seats in the 182-member strong Assembly. This was for the first time that the party failed to touch the 100-seat mark in the Assembly. The saffron party received 1,47,24,031 votes with a vote share of 49.05 per cent. The Congress along with the Bharatiya Tribal Party (BTP) and the support of Hardik Patel, Alpesh Thakor and Jignesh Mevani won 80 seats in the state. The Congress alone was successful on 77 constituencies and received 1,24,37,661 votes with a vote share of 41.44 per cent. In the 2012 Assembly elections, the BJP won 115 seats and the Congress grabbed 61 seats. The BJP received a huge jolt in the Saurashtra region of the state due to the Patidar agitation by Hardik Patel.

What is the current scenario in 2019?
There will be a direct contest between the BJP and the Congress in the upcoming 2019 Lok Sabha elections. The BJP will try to retain all the 26 seats in the state but the results of the 2017 Assembly polls were an eye-opener for the party. However, the party will try to convince the voters to give Narendra Modi another chance. On the other hand, Congress is facing dissent within the party. Two Congress legislators have already quit the party and the trouble is brewing for it ahead of the crucial Lok Sabha elections. Kunwarjibhai Bavaliya and Ashaben Patel alleged that they were being neglected by the party. Bavaliya not only resigned from the party but joined the BJP and won Jasdan seat in a bypoll. The party finally reached the 100-mark in the Assembly with this victory.

There were reports that another MLA Alpesh Thakor may leave the party but he dismissed the reports of discontentment. Meanwhile, Congress rebel and former chief minister Shankersinh Vaghela has just joined the Sharad Pawar-led Nationalist Congress Party (NCP) and trying to create a Third Front in the state. Vaghela was once a very close friend of Prime Minister Narendra Modi and former Gujarat chief minister Keshubhai Patel.