2019 Lok Sabha Election Analysis: What happened in Karnataka in 2014 polls? What will happen this year?

In 2014 Lok Sabha Elections, The Bharatiya Janata Party (BJP) Performed Extremely Well After The Return Of BS Yeddyurappa In The Party Fold. The BJP Won 17 Seats Whereas The Congress Was Restricted To Just 9 Seats In The State.

Lok Sabha Elections 2019: The Election Commission of India (ECI) has finally sounded the poll bugle and declared the schedule for the Lok Sabha Elections 2019 on March 10. The Lok Sabha Elections 2019 will be held in seven phases, starting from April 11. The results will be declared on May 23. 91 constituencies will go for polls in the first phase on April 11, followed by 97 constituencies in the second phase on April 18. The third phase will be held on April 23 and fourth on April 29, fifth on May 6, sixth on May 12 and seventh phase on May 19. 115 constituencies will go for polls in the third phase, 71 in the fourth phase, 51 in the fifth phase, 59 in the sixth phase and 59 in the seventh phase. We are also gearing up for the elections and are coming up with a series: 2019 Lok Sabha Election Analysis: What happened in 2014 Lok Sabha Polls? What will happen this year? Now, let's look at the political scenario in the state Karnataka. The HD Kumaraswamy-led JDS-Congress alliance is in the power after the 2018 elections that resulted in a hung Assembly. The BJP emerged as the single largest party in the state and the Governor invites its leader BS Yeddyurappa to form the government in the state. However, Yeddyurappa failed to prove his majority and resigned after the Congress decided to support JDS leader HD Kumaraswamy. The Congress was ruling the state under Siddaramaiah between the period of 2013 and 2018 and lost elections. Both, the JDS and the Congress are also trying to form an alliance for the upcoming Lok Sabha elections also to challenge the BJP in the state. But the stability of the Kumaraswamy government has been under threat since its formation as several leaders of both the parties are unhappy with the alliance. Let's discuss this in detail. Also Read: Lok Sabha Elections 2019: When will you vote? Know poll dates of your seat here

What happened in Karnataka in 2014 Lok Sabha Elections? 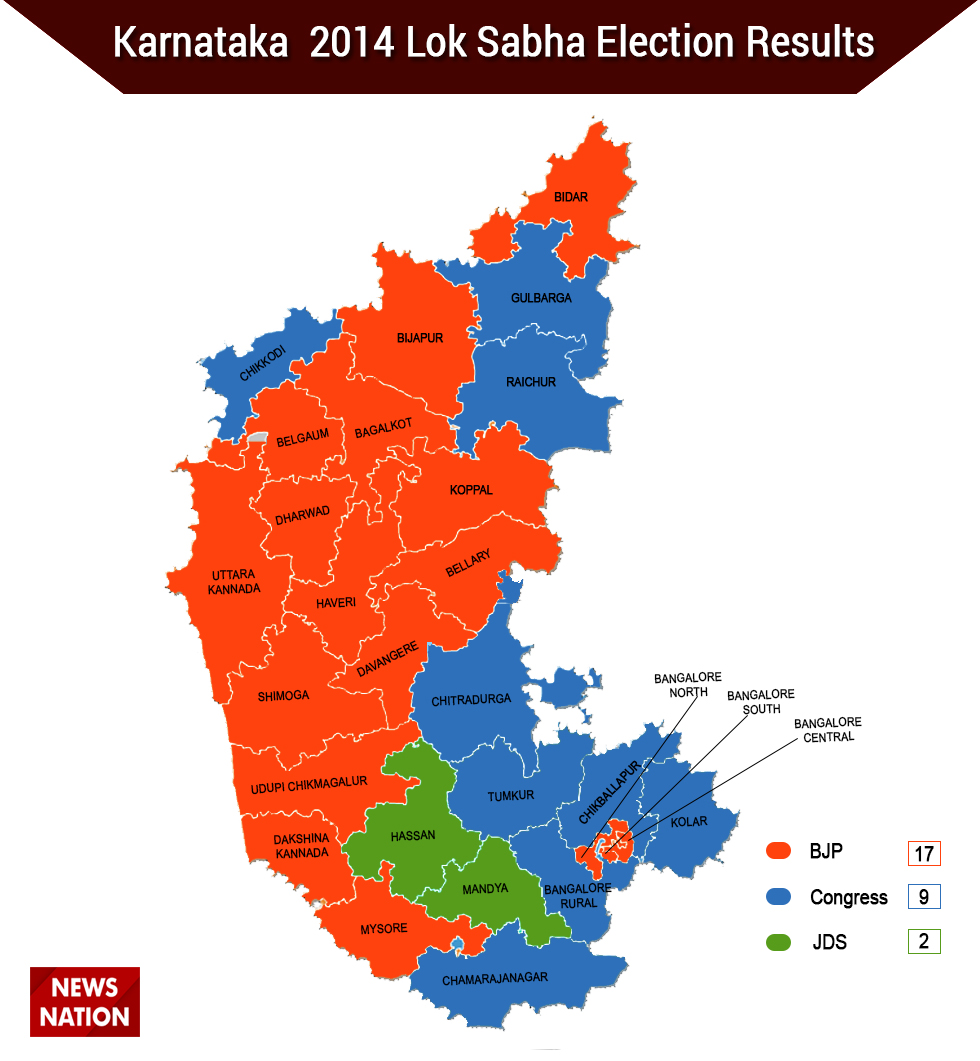 In 2014 Lok Sabha Elections, the Bharatiya Janata Party (BJP) performed extremely well after the return of BS Yeddyurappa in the party fold. The 2014 election in Karnataka was held in a single phase on April 17. The state sends 28 members to the Lok Sabha. The BJP won 17 of these seats whereas the Congress was restricted to just 9 seats in the state. The Janata Dal-Secular (JDS) was successful in the remaining 2 seats (Mandya and Hassan). In 2009, the BJP was successful on 19 seats and the Congress and the JDS won 6 and 3 seats respectively.

The BJP performed well after the return of 'Lingayat strongman' BS Yeddyurappa into the party. The BJP was ahead in Coastal Karnataka, Bombay Karnataka and Central Karnataka. The Governor invited Yeddyurappa to form the government but the BJP was not able to reach the magic figure of 113 in the Assembly and he had to resign. The Congress quickly backed the JDS and formed a post-poll alliance under HD Kumaraswamy in order to snatch the state from the BJP. In 2013 Karnataka Assembly polls, the Congress stormed back to power with 122 seats after defeating the incumbent BJP. The BJP was reduced to just 40 seats with a vote share of only 19.9 per cent. The JDS also won 40 seats but with a better vote share of 20.2 per cent than the BJP. Yeddyurappa broke the BJP and founded his own Karnataka Janata Paksha (KJP) and received almost 10 per cent votes in the state. He along with B. Sriramulu's BSR Congress party dented the BJP's prospects in the state elections.

What is the current scenario in Karnataka in 2019?
The Congress-JDS alliance is likely to contest the 2019 Lok Sabha Elections together to take on the BJP in Karnataka. However, some reports suggest that the Congress is also considering to go solo as the JDS is demanding 10 to 12 Lok Sabha seats for itself. The alliance can challenge the saffron party in the state and their cumulative vote share is larger than the BJP's vote share. Recently, the alliance won 4 out of 5 seats in the bypolls. The Congress won Bellary Lok Sabha and Jamkhandi Assembly seat whereas the JDS registered victories in Mandya Lok Sabha and Ramanagaram Assembly seats. The BJP was able to win only Shimoga (Shivamogga) Lok Sabha seat in the bypoll.

The combined vote share of the alliance has been more than 50 per cent and it can reduce the BJP seats considerably in the upcoming Lok Sabha polls. Meanwhile, the rebel Congress MLAs are giving some sleepless nights to Chief Minister Kumaraswamy. The JDS vote share is limited to the South Karnataka and Mysore region and the Congress is also very strong in this region. This can spell trouble for both the parties as the local leaders are not very keen to leave their strong seats for the other party.