2019 Lok Sabha Election Analysis: What happened in Madhya Pradesh in 2014 polls? What will happen this year?

The Shivraj Singh Chouhan-led BJP Finally Lost The Assembly Elections In Madhya Pradesh Recently After 15 Long Years At The Hands Of The Congress Party Under The Leadership Of Kamal Nath And Jyotiraditya Scindia.

Lok Sabha Elections 2019: The Election Commission of India (ECI) has finally sounded the poll bugle and declared the schedule for the Lok Sabha Elections 2019 on March 10. The Lok Sabha Elections 2019 will be held in seven phases, starting from April 11. The results will be declared on May 23. 91 constituencies will go for polls in the first phase on April 11, followed by 97 constituencies in the second phase on April 18. The third phase will be held on April 23 and fourth on April 29, fifth on May 6, sixth on May 12 and seventh phase on May 19. 115 constituencies will go for polls in the third phase, 71 in the fourth phase, 51 in the fifth phase, 59 in the sixth phase and 59 in the seventh phase. We are also gearing up for the elections and are coming up with a series: 2019 Lok Sabha Election Analysis: What happened in 2014 Lok Sabha Polls? What will happen this year? Let us look at the political scenario in the state of Madhya Pradesh.

The Shivraj Singh Chouhan-led BJP finally lost the Assembly elections in Madhya Pradesh recently after 15 long years at the hands of the Congress party under the leadership of Kamal Nath and Jyotiraditya Scindia. The Congress, which lost the state in 2003, made a strong return but failed to become the single largest party in terms of the vote share. In 2003, the Congress under Digvijaya Singh lost power when the BJP led by Uma Bharti ousted him after 2 consecutive terms (1993-2003). Uma was later replaced with Babulal Gaur and in 2005 Shivraj Singh Chouhan became the chief minister for the first time. The BJP under his leadership won two consecutive Assembly elections in 2008 and 2013 winning 143 and 165 seats respectively. The BJP stormed to power in Madhya Pradesh in 1990 for the first time and formed its maiden government in the state under Sunderlal Patwa. However, the government was removed by the Centre in 1992 after the demolition of Babri Masjid in Ayodhya. The BJP did better than the Congress party in the Lok Sabha Elections of 1996, 1998, 1999, 2004, 2009 and 2014 in the state. However, the Congress took a lead in 13 Lok Sabha seats in the 2018 Assembly Elections as compared to 16 seats of the BJP. Let's discuss state politics in detail. Also Read: Lok Sabha Elections 2019: When will you vote? Know poll dates of your seat here

Lok Sabha Elections 2019: When will Madhya Pradesh vote?
Madhya Pradesh will vote in four phases on April 29, May 6, 12 and 19. Polling will be held in 6 Lok Sabha seats namely Sidhi, Mandla, Balaghat, Jabalpur, Shahdol and Chhindwara in the third phase. Satna, Tikamgarh, Betul, Rewa, Hoshangabad, Khajuraho and Damoh will go for polls in the fourth phase on May 6. People in Bhind, Morena, Sagar, Vidisha, Bhopal, Gwalior, Rajgarh and Guna will vote on May 12 whereas the remaining 8 seats of Dhar, Ratlam, Ujjain, Mandsour, Dewas, Indore, Khargone and Khandwa will vote in the last phase on May 19.

What happened in Madhya Pradesh in 2014 Lok Sabha Elections?
In 2014 Lok Sabha polls, the BJP completely swept the state and won 27 seats in Madhya Pradesh. The BJP received 1,60,15,695 votes with a whopping vote share of 54.8 per cent. The Congress managed to win only 2 seats in the state and received 1,03,40,274 votes with a vote share of 35.3 per cent. Only Kamal Nath from Chhindwara and Jyotiraditya Scindia from Guna were able to emerge victorious from the party in the state. The Bahujan Samaj Party (BSP) got 3.8 per cent of the total votes polled in the state. Madhya Pradesh has 29 Lok Sabha seats and the 2014 election in the state was held in three phases on April 10, 17 and 24. 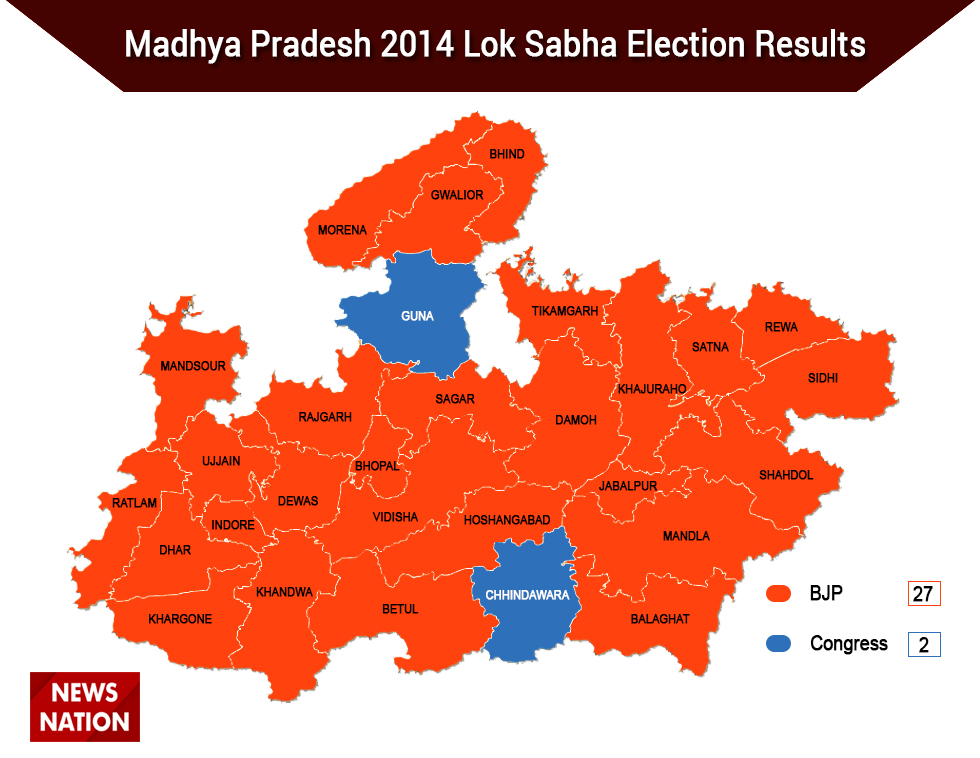 According to our analysis, the BJP was ahead in 192 Assembly segments during the 2014 Lok Sabha polls. The Congress was leading on just 36.

What was the result of Madhya Pradesh Assembly Elections in 2018?
The BJP lost the Madhya Pradesh Assembly Elections in 2017 after its three consecutive victories in 2003, 2008 and 2013. However, the party was the single largest party in the state in terms of vote share. Shivraj Singh Chouhan finally had to step down after his 13-year-long tenure in the state.

In 2013 Assembly polls, the Congress won only 58 seats whereas the BJP was successful in 165 seats.

What is the current scenario in Madhya Pradesh in 2019?

The BJP and the Congress are the two main parties in the state but the BSP and the SP have decided to forge an alliance in Madhya Pradesh too. The Congress is upbeat after its victory in the state in 2018 and wants to replicate its Assembly success in the upcoming Lok Sabha polls. The saffron party has already declared some of its candidates for the polls including Narendra Singh Tomar from Morena, Virendra Kumar from Tikamgarh, Prahlad Patel from Damoh, Janardan Mishra from Rewa, Rakesh Singh from Jabalpur, Rao Udai Pratap Singh from Hoshangabad and Nand Kumar Singh Chauhan from Khandwa. The party has shifted Tomar from Gwalior to Morena and denied tickets to some of its sitting MPs in the state. Meanwhile, the Congress has fielded Digvijaya Singh from Bhopal this time. The party has also declared the names of Kantilal Bhuria from Ratlam, Meenakshi Natarajan from Mandsour and Kiran Ahirwar from Tikamgarh.

The BJP has never lost Bhind, Damoh, Vidisha, Bhopal and Indore Lok Sabha seats since 1989. The Congress has never lost Chhindwara seat barring a bypoll in 1997 when Kamal Nath lost to BJP’s Sunder Lal Patwa and it has been winning Guna since 1999.

What is News Nation Opinion Poll verdict in Madhya Pradesh?
According to News Nation Opinion Poll, the BJP is likely to get 41 per cent of vote share in the upcoming Lok Sabha polls. The Congress may get 35 per cent of votes, predicts the poll. The BJP may win 21 seats and the Congress can win 8 seats in 2019. So, the BJP is projected to lose 6 seats in the upcoming Lok Sabha polls in Madhya Pradesh. According to the poll, the Congress can hope to get 6 more seats in the state as compared to the 2014 Lok Sabha polls. 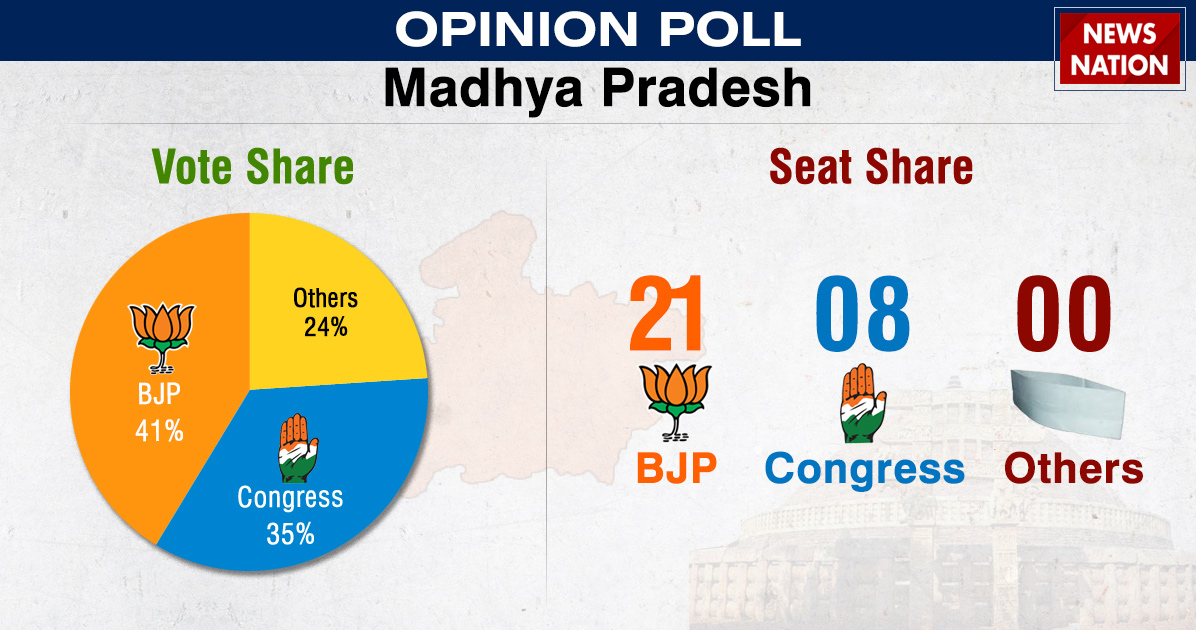 Prime Minister Narendra Modi has a double-digit lead over Congress chief Rahul Gandhi in Madhya Pradesh also when the respondents were asked about their favourite Prime Ministerial candidate in 2019. PM Modi got the backing of 51 per cent people, while close to 37 per cent chose Rahul Gandhi.