2019 Lok Sabha Election Analysis: What happened in Punjab in 2014 polls? What will happen this year?

Lok Sabha Elections 2019: The Election Commission of India (ECI) has sounded the poll bugle and declared the schedule for the Lok Sabha Elections 2019. The Lok Sabha polls will be held in seven phases, starting from April 11. The results will be declared on May 23. 91 constituencies will go for polls in the first phase on April 11, followed by 97 constituencies in the second phase on April 18. The third phase will be held on April 23 and fourth on April 29, fifth on May 6, sixth on May 12 and seventh phase on May 19. 115 constituencies will go for polls in the third phase, 71 in the fourth phase, 51 in the fifth phase, 59 in the sixth phase and 59 in the seventh phase. We are also gearing up for the elections and are coming up with a series: 2019 Lok Sabha Election Analysis: What happened in 2014 Lok Sabha Polls? What will happen this year? Let us look at the political scenario in the state of Punjab.

The Congress under Captain Amarinder Singh will face the SAD-BJP and the AAP in the upcoming Lok Sabha polls. The party now wants to replicate its 2017 success in the upcoming Lok Sabha polls also. Parkash Singh Badal had to quit in 2017 after the NDA was completely routed by the Congress in the state polls. Badal was the chief minister for two consecutive terms since 2007. In 2007 polls, the Akali Dal-BJP alliance won 68 seats (SAD: 49 and BJP: 19) in the Assembly whereas the Congress lost power after winning just 44 seats. The alliance created history in 2012 when they retained power for a second consecutive term. The Akali Dal formed an alliance with the BJP in 1997 and was one of the founding members of the NDA. The SAD was the only party that supported the Atal Bihari Vajpayee government in 1996 after the elections. However, the emergence of the AAP in state politics can be a serious threat to both the traditional rivals. In the 2004 Lok Sabha polls, the NDA swept the state with 11 seats (SAD: 8 and BJP: 3) and reduced the Congress with the remaining 2 seats. In the 2009 Lok Sabha polls, however, the Congress avenged the defeat of 2004 and won 8 seats in the state. The NDA was able to win 5 seats in the state. Let's discuss state politics in detail. Also Read: Lok Sabha Elections 2019: When will you vote? Know poll dates of your seat here

Lok Sabha Elections 2019: When will Punjab vote?
Punjab will vote in the seventh and last phase on May 19. Polling in all 13 seats of the state will take place in a single phase. In 2014 also the state went for a single-phase poll on April 30.

What happened in Punjab in 2014 Lok Sabha Elections?
In 2014 Lok Sabha polls, the verdict was split between the Akali Dal-BJP, the Congress and a new entrant Aam Aadmi Party (AAP) in Punjab. The Akali Dal-BJP combine emerged as the single largest block in the elections and won 6 seats in the state. Punjab sends 13 members to the lower house of Parliament. The Akali Dal won 4 seats whereas the BJP became victorious on 2 seats. The Akali Dal received 36,36,148 votes with a vote share of 26.4 per cent while its ally the BJP got 12,09,004 votes with a vote share of 8.8 per cent. The Congress received 45,75,879 votes a decent vote share of 33.1 per cent in the state but managed to win just 3 seats of Amritsar, Jalandhar and Ludhiana. Meanwhile, the AAP surprised everyone in the elections with its debut performance and won 4 Lok Sabha seats (Patiala, Faridkot, Fatehgarh Sahib and Sangrur) with a vote share of 24.4 per cent. 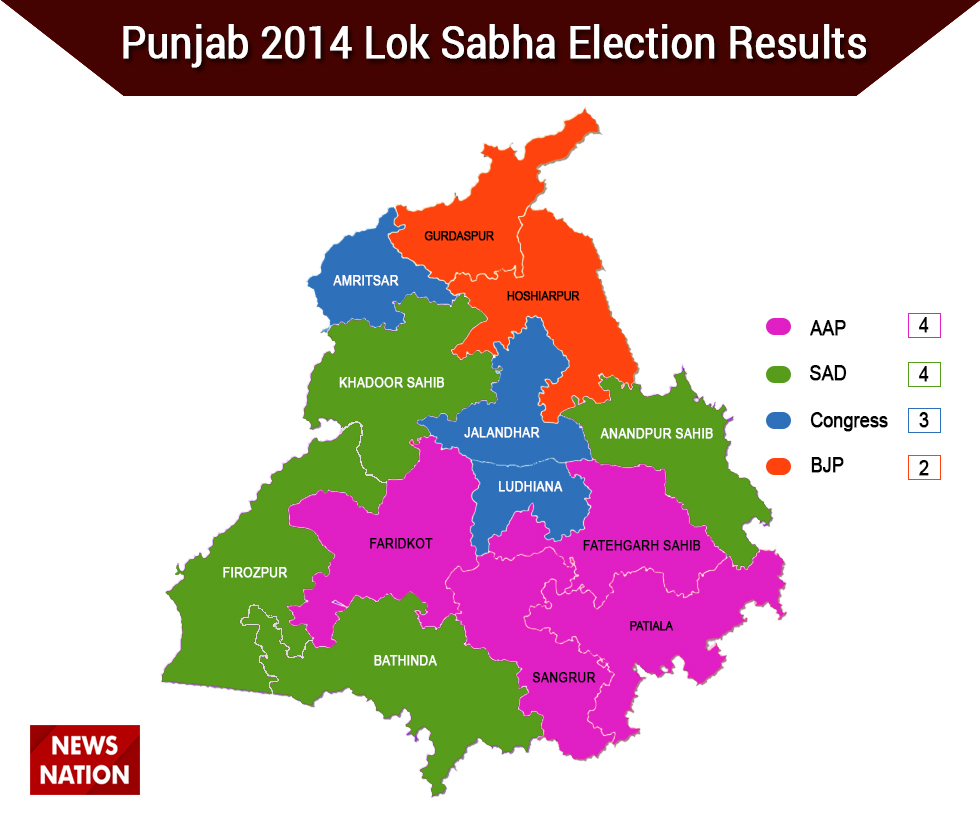 According to our analysis, the SAD-BJP alliance was ahead in 45 Assembly segments during the 2014 Lok Sabha polls. The Congress was leading on just 37. The AAP stunned the poll analysts and all the rivals with its remarkable entry with its lead in 33 Assembly seats.

What was the result of Punjab Assembly Elections in 2017?
The resurgent Congress defeated the Akali Dal-BJP combine and the AAP in the 2017 Assembly polls in Punjab. The NDA lost the elections after its two consecutive victories in 2007 and 2012 Assembly elections in the state. In 2012, the Akali Dal-BJP alliance made a stunning comeback in the state and ended the concept of 'Yo-Yo Politics' in the state. However, the alliance failed to repeat its performance in 2017 and even lost the status of the main opposition party or alliance to the AAP. The Congress under the leadership of Amarinder Singh trounced its opponents and captured 77 seats in the 117-member state Assembly. The party received 59,45,899 votes with a vote share of 38.5 per cent.

On the other hand, the AAP forged an alliance with the Lok Insaaf Party (LIP), founded by disgruntled Akali Dal leaders Simarjit Singh Bains and Balwinder Singh Bains. Their alliance won 22 seats (20 for AAP and 2 for LIP) in the Assembly. The AAP received 36,62,665 votes with a vote share of 23.7 per cent.

What is the current scenario in Punjab in 2019?
The Akali Dal and the BJP are again contesting the elections in alliance and with the old seat-sharing formula of 10-3 (10 seats for Akali Dal and 3 seats for BJP). The BJP will field its candidates in Hoshiarpur, Amritsar and Gurdaspur. Arun Jaitley lost the elections from Amritsar against Amarinder Singh in 2014 after the BJP decided to field him in place of its sitting MP Navjot Singh Sidhu. However, the BJP couldn't retain the seat and Sidhu left the party and joined the Congress. Sidhu also became the minister in the Amarinder Cabinet in 2017 and has been recently in news for his controversial remarks over Balakot strikes. But the Congress is in a confident mood after party's victories in 2017 and 2018 Shahkot bypoll and due to rifts in the rival camps of the Akali Dal and the AAP. Many Akali Dal leaders such as Ranjit Singh Brahmpura, Sewa Singh Sekhwan and Rattan Singh Ajnala have left the party and floated Shiromani Akali Dal (Taksali). On the other hand, the AAP also faced a rebellion in its Punjab unit and Sukhpal Khaira and Baldev Singh are fighting elections after resigning from their own party.

The Congress has already given tickets to Sunil Jakhar, Gurjit Singh Aujla, Ravneet Singh Bittu and Preneet Kaur to contest the upcoming polls while the Akali Dal has decided to field Prem Singh Chandumajra, Charanjit Singh Atwal and Bibi Jagir Kaur this time.

What is News Nation Opinion Poll verdict in Punjab?
According to News Nation Opinion Poll, the SAD-BJP alliance is likely to get 32 per cent of vote share in the upcoming Lok Sabha polls. The Congress may also get 32 per cent of votes, predicts the poll. The AAP is projected to receive 19 per cent of votes. The SAD-BJP duo and the Congress both may win 6 seats each in the polls in 2019. The AAP is most likely to be reduced to just a single seat in the state. According to the poll, the Congress can hope to get 3 more seats in the state as compared to the 2014 Lok Sabha polls. 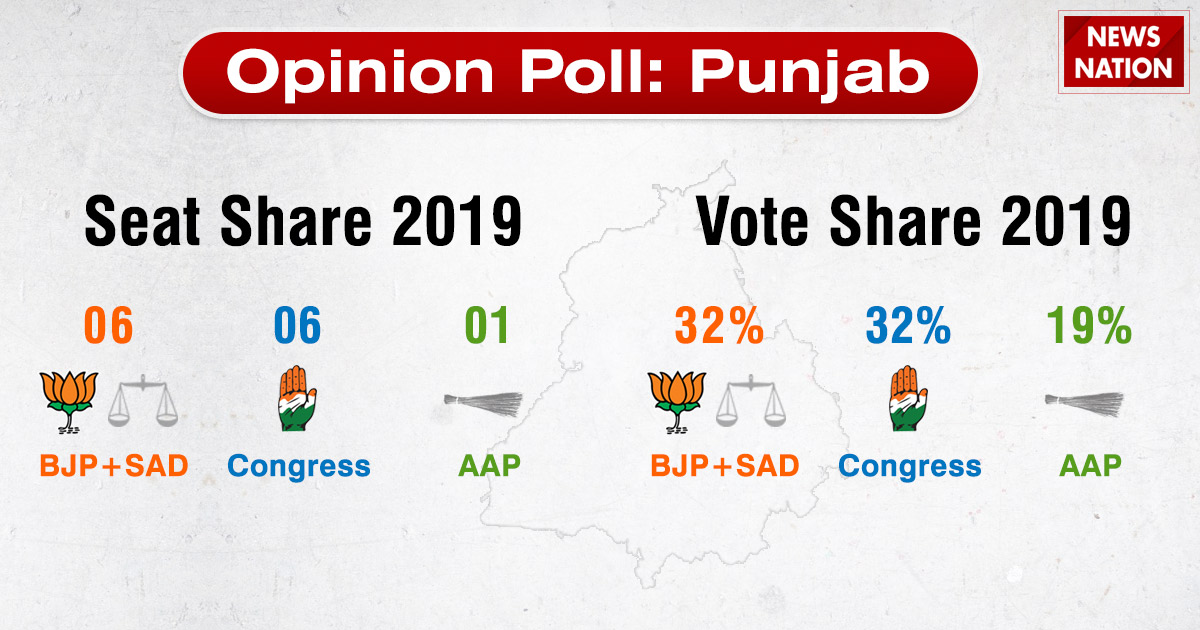 Prime Minister Narendra Modi has a slim lead over Congress chief Rahul Gandhi in Punjab when the respondents were asked about their favourite Prime Ministerial candidate in 2019. PM Modi got the backing of 38 per cent people, while close to 30 per cent chose Rahul Gandhi.