With New Contestants In The House, Fights Have Become Uglier Than Before. In The Latest Incident, Tehseen Was Seen Mocking Asim For Modelling For Innerwear And Said He Could “hire 100s Like Him'.

Salman Khan's Bigg Boss 13 is nearing its finale and makers are leaving no stone unturned to keep their audience hooked to the Television screens. To spice up the game, the makers have introduced Kanta Laga girl Shefali Jariwala, Tehseen Poonawalla, Arhaan Khan, Himanshi Khurana and Bhojpuri singer Khesari Lal Yadav as the wild card contestants. And with new contestants in the house, fights have become uglier than before. In the latest incident, Tehseen was seen mocking Asim for modelling for innerwear and said he could “hire 100s like him”.

Asim’s brother Umar took to social media to defend him and penned a note condemning Tehseen’s behaviour. He wrote in an Instagram story, ''The way Tehseen Poonawalla mocked Asim was way out of the league. Bullying him for where he comes from career, walk was totally unacceptable. Being a social activist and a public speaker, I respected him and expected more.''

Umar added that he was proud of Asim because he didn’t retaliate negatively. ''But Asim didn’t say anything to him. This makes me feel more proud of my brother. Way to go bro. You have won hearts by your patience and keep doing that! More power to you bro (sic),'' he wrote. 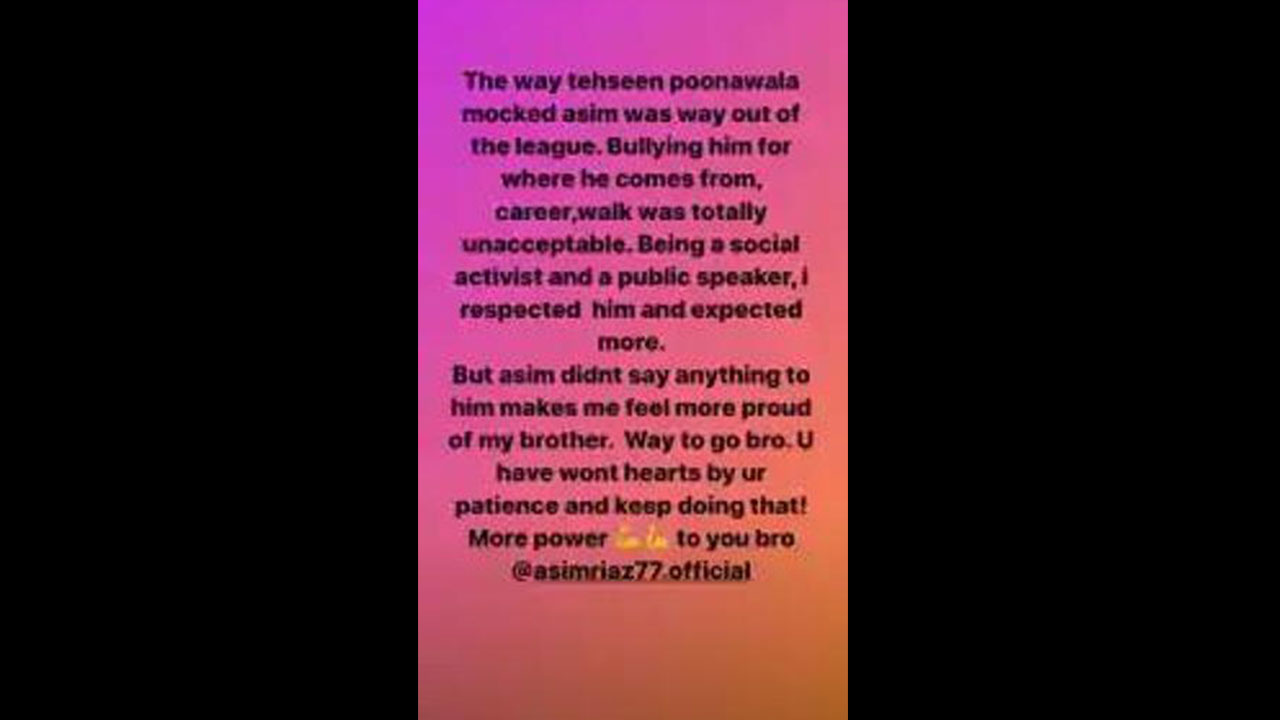 Tehseen has also been slammed by Asim's friend, Shruti Tuli, in an open letter. Even though she didn't name Tehseen, but her post is clearly directed at him. Shruti wrote, "I never thought I’ll write anything about BB13 because honestly I felt it was none of my business until now. Someone is acting very Racist on the basis ofAsim’s @asimriaz77.official background. He thinks he can hire 100-150 people like him. He didn’t stop here. He chose to bash whole modeling industry and models, saying we( here: he ) put makeup in Underwear. And then walks in a certain way. What type of behaviour is this? How can you bully someone on the basis of background and profession.

She added, "Another incident when so called friend threw boxes on his face. Can’t forget how can anyone even pull someone’s pants? Some Women think they can do anything and somehow it’s ignored just because they play women card. High time for #hetoo . It is very embarrassing for anyone, be it he/she. This is ridiculous and won’t be accepted. I request you all to join hands and tweet #justiceforasim because this time nobody should be spared from their offensive acts. High time."

Post the episode, #JusticeForAsim also started trending on Twitter, and many sought an apology from Tehseen for his uncalled for behaviour.