Paras Chabbra’s Girlfriend Akanksha Puri Took To Instagram Stories To Share Pictures Of His ‘stinking Dirty Shoes And Clothes’ From The House That He Asked Her To Wash.

In the recent episode of Bigg Boss 13, Paras Chhabra and Mahira Sharma were captured sharing an intimate moment. Paras was seen showering Mahira with kisses after their playful fight. Not only this, the two have also confessed their love for each other publically now. Now, Chabbra’s girlfriend Akanksha Puri took to Instagram stories to share pictures of his ‘stinking dirty shoes and clothes’ from the house to Akanksha’s home with a message that he wants his shoes and clothes to be washed and sent back to him.

In another post, she wrote, ''Yaar ye log andar task kar rahe hai ke kya kar rahe hai. My house is stinking. These clothes are in such bad state. So paras im not sending you anything back, kuch wash nahi karwaungi.(sic).'' 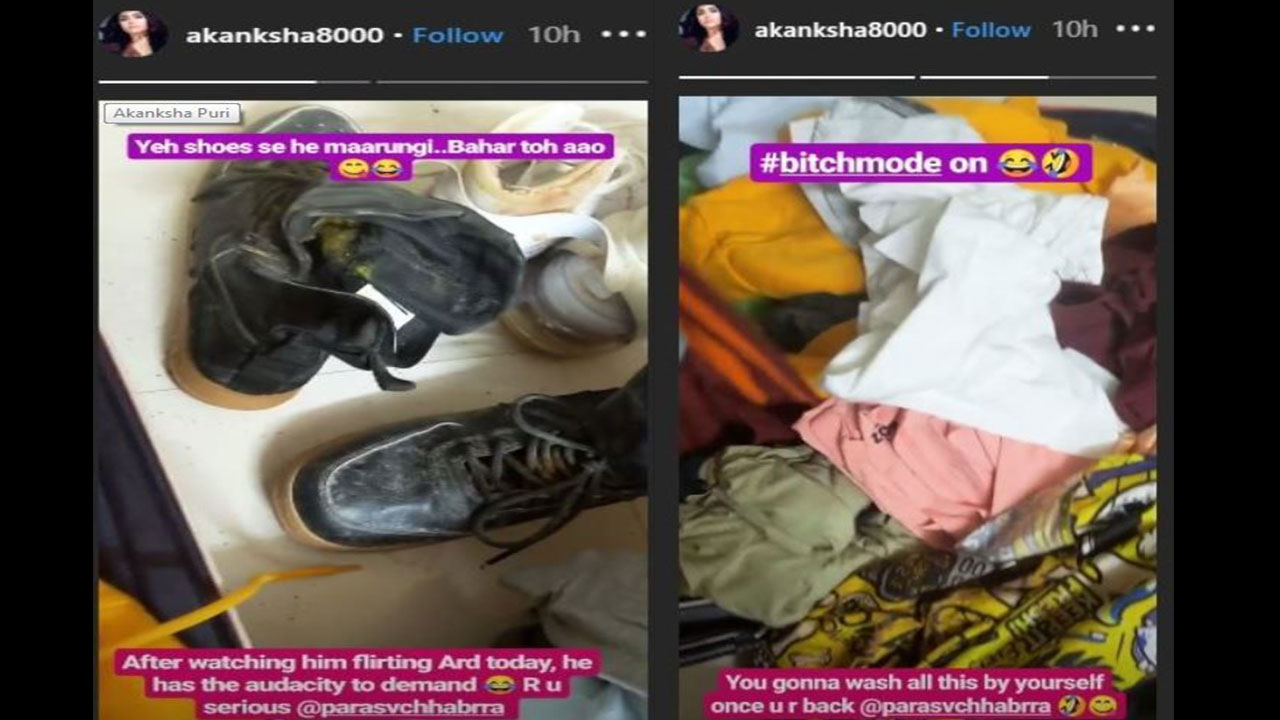 In a recent interview with India Forums, Akanksha Puri was asked about Paras Chhabra kissing Mahira Sharma inside the Bigg Boss 13 house. To this, she said, ''Now, even I have started doubting that he has been either playing there for three months or playing with me from three years. I guess my suggested idea is proving heavy to me. Still, I want to wait for him to come out and talk as he left on a very different note. I don’t want to jump to any conclusion.''

Earlier on Bigg Boss 13, Paras had said that he was forced to get Akanksha's name inked on his wrist. In a conversation with Arhaan Khan, he said, ''Kyun maine tattoo banwaya, yeh reason nahi pata tujhe? I was mindf**ked toh I had to, ki chal tu shaant ho jaa (You know the reason why I got the tattoo? I was mindf**ked and I had to, to calm her down),'' he said, adding that she would constantly ask him to prove his love and commitment towards her.

Akanksha responded to his comments in an interview and said, ''The tattoo on his hand was a surprise gift from him. I was in the middle of a shoot when he sent a picture of the tattoo on my phone. And because he had tattooed my signature, I got a tattoo of his name. I never thought that he would cook up this story inside the house,'' she said.

Mahira and Paras have been linked ever since he distanced himself from Shehnaaz and showed his interest in Mahira.