Zareen Khan Reveals Her ‘favourite’ Contestant Of Bigg Boss 13 During A Question And Answer Session On Instagram.

With Bigg Boss 13 nearing the finale, viewers will be met with mixed-bag of episodes before one contestant finally takes home the Bigg Boss crown. Among the remaining contestants who seems to be stealing the spotlight has been Sidharth Shukla, who, despite receiving mixed reviews regarding his tactics won many a fan from the TV industry including Kamya Punjabi, Rupali Ganguly, Dolly Bindra, Kushal Tandon and now Salman Khan’s former co-star Zareen Khan who revealed in her Instagram story that Shukla is her favourite contestant.

During a Q and A session on Instagram where fans asked Zareen who is her favourite on BB 13 is, the Veer actor shared a picture of Sidharth Shukla while also letting him know by tagging him in the Instagram story. 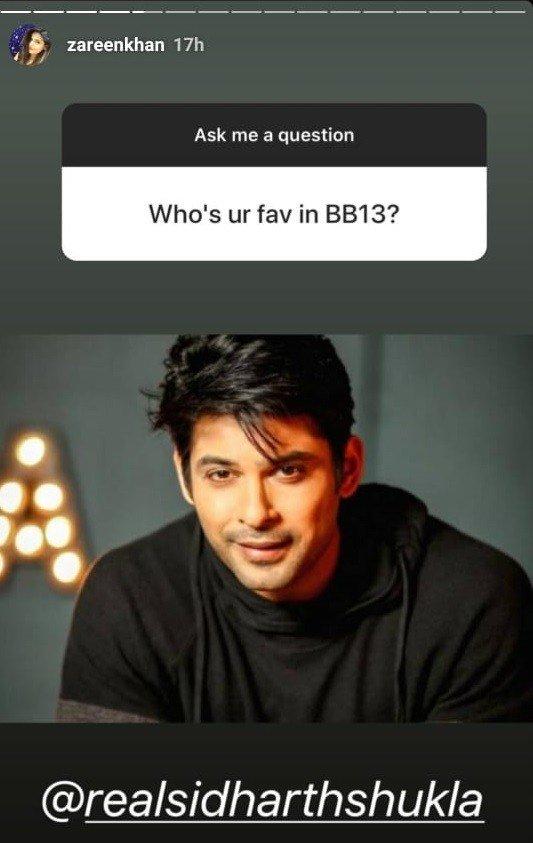 As for other ‘love is in the air’ in the Bigg Boss house, Arhaan Khan who was eliminated in shocking turn admitted that he is in love with Rashami Desai and wants to propose to her. Speaking to TOI post the elimination, the actor said, ''Rashami was my best friend and I got to know her better while staying inside the house and my feelings towards her changed. I felt attracted to her inside the house. Unki taraf se bhi jo gestures the, toh cheezein kaafi change hone wali thi. Unfortunately, that didn’t happen.''