Striking A Pose With Husband Nick Jonas For A Photo-op Outside The Reception Venue, Priyanka Smiled And Told Reporters, Ab Aapko Family Se Milate Hai (Let Me Introduce My Family To You Guys).

Icing on the cake, Prime Minister Narendra Modi on Tuesday attended Priyanka Chopra and Nick Jonas' grand wedding reception at the lavish Taj Palace Hotel in New Delhi. Far away from the hustle bustle of Mumbai, Nickyanka, as they are popularly called, got hitched in traditional Hindu and Christian styled wedding ceremony at Jodhpur’s Umaid Bhawan Palace on December 1 and 2. Being touted as one of the most hyped events of the year, Jonas and Chopra's wedding was nothing less than a fairy-tale and could easily rival many a royal nuptial. Just like the wedding affair, the reception was also a fiercely- guarded event being held in the national capital this evening.

While Priyanka opted for a beige lehenga with neatly tied bun adorned with white flowers, Nick complemented her in a velvet jacket paired with matching black trousers and a bow tie. Apart from Modi, Priyanka's mother Madhu Chopra and Nick's parents Denise Miller Jonas and Paul Kevin Jonas Sr - joined the couple on stage. Nick's elder brother Joe and his fiancé Sophie Turner were also clicked by the shutterbugs to add colour to the event.

Striking a pose with husband Nick Jonas for a photo-op outside the reception venue, Priyanka smiled and told reporters, "Ab aapko family se milate hai (Now let me introduce my family to you guys)". 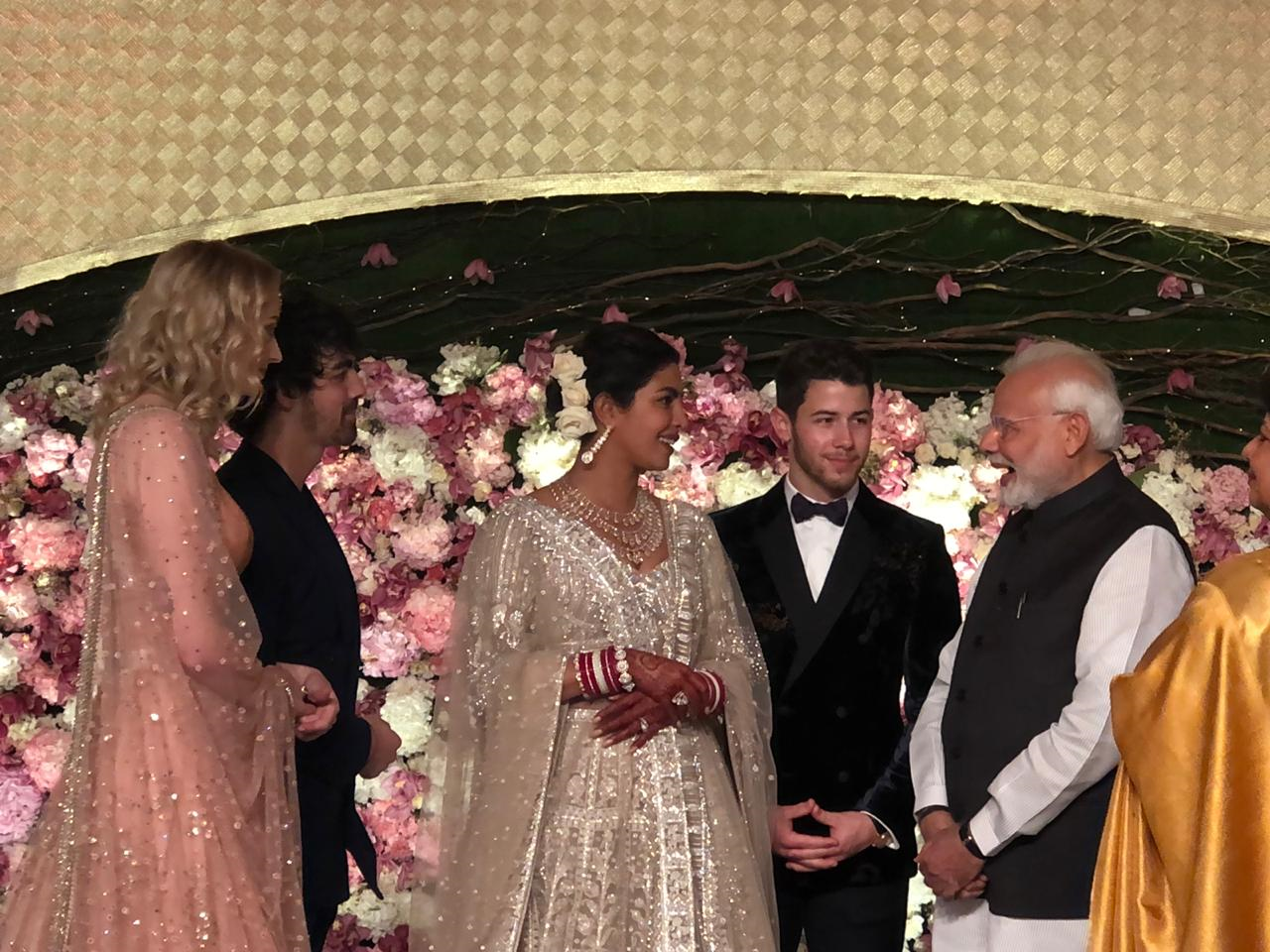 Earlier, the couple shared a number of pictures from their Mehndi and Sangeet festivities but the veil on the final twin ceremonies was lifted by People magazine this evening. The US-based publication had the exclusive access to the wedding ceremony.

After the magazine dropped the pictures, the couple shared the photographs with lovefilled messages for each other.

On the other hand, Nick shared the picture from the Hindu wedding and captioned it as "Happiest day of my life."

Happiest day of my life. @priyankachopra

While the first ceremony was all about subtle whites and pastels, the couple switched to bold red and gold for the traditional Hindu wedding. Priyanka made for a stunning bride in a custom red Sabyasachi lehenga.

Uncut diamonds, emeralds and Japanese cultured pearls in 22k gold were used to put the bride's jewellery together. Nick opted for a hand-quilted silk beige sherwani with a hand-embroidered chikan dupatta and a chanderi-tissue safa by Sabyasachi, who was also responsible for the groom's golden footwear, rose cut kalgi and syndicate diamond necklace.

The ceremony was followed by 'bidaai' before the couple flew to Delhi for their reception on Monday.