Aishwarya Rai Bachchan Will Reunite With Mani Ratnam In His Ambitious Project, Ponniyin Selvan As A Chola Queen.

Aishwarya Rai Bachchan will reunite with Mani Ratnam in his ambitious project, Ponniyin Selvan as a Chola queen. On Thursday, the first glimpse of the film was released by the makers and fans could not wait for her first official look as a royal queen Nandini and so is her husband, Abhishek Bachchan.

Sharing the pictures, a fan page wrote on Twitter that she would “pass out” when Aishwarya’s first look is unveiled. “The first glimpse of #PonnyinSelvan already has me so excited. Imagine the day we get Aishwarya’s first look, I swear I’ll pass out.” S.aid the post The post invited a comment from Abhishek who wrote back saying: “Me too.” 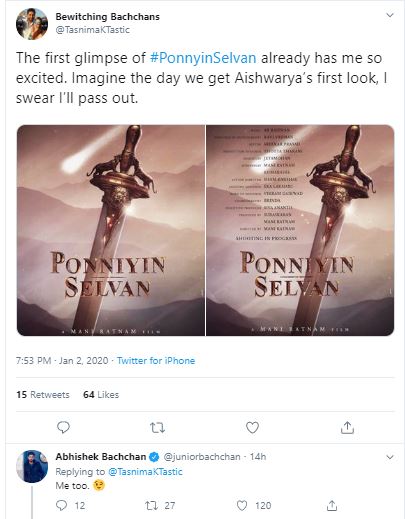 In the picture, all we see is a sword, standing at a tangent. Its handle also shows two tigers facing each other. Ponniyin Selvan is a film adaptation of a popular Tamil novel of the same name and chronicles the rise of the Chola rulers.

Her character is written as a mysterious, power-hungry woman who manipulates her husband to plan the downfall of the Chola empire because she has been wronged by them.”

Backed by Lyca Productions, the royal tale will go on floor next year. The pre-production work for 'Ponniyin Selvan' has already commenced as the makers are busy building huge sets to shoot crucial portions of the film.

The novel Ponniyin Selvan follows a Chola dynasty King Arulmozhivarman during the 10th and 11th centuries.

For the uninitiated, Aishwarya made her acting debut in 1997 with a dual role in Mani Ratnam's Tamil political drama film Iruvar that also features Mohanlal, Tabu, Prakash Raj in prominent roles.

Abhishek meanwhile will be seen in The Big Bull: An Unreal Story. The film will be directed by Kookie Gulati and produced by Ajay Devgn and Anand Pandit. The poster of the movie released recently. The Big Bull is reportedly loosely based on the infamous stock-broker Harshad Mehta, who was charged for numerous financial crimes during the securities scams of 1992.