Akshay Kumar Recently Found Himself In A Social Media Soup After He ‘accidentally’ Liked A Post That Mocked The Breakdown On Students At The Jamia Millia Islamia University Campus.

Akshay Kumar recently found himself in a social media soup after he ‘accidentally’ liked a post that mocked the breakdown on students at the Jamia Millia Islamia University campus. The actor later ‘unliked’ the post and clarified that he does not support such act. Since then he has not voiced any opinion about the ongoing protests. Filmmaker Anurag Kashyap who is ignited and made a Twitter comeback to protest the government measures has retweeted a tweet that calls the Khiladi actor one with a ‘missing spine’.

The Twitter user wrote, "I have immense respect for Akshay Kumar. It must be extremely difficult to be trained in Martial Arts with a spine missing." The director tweeted, "Absolutely" on the tweet. 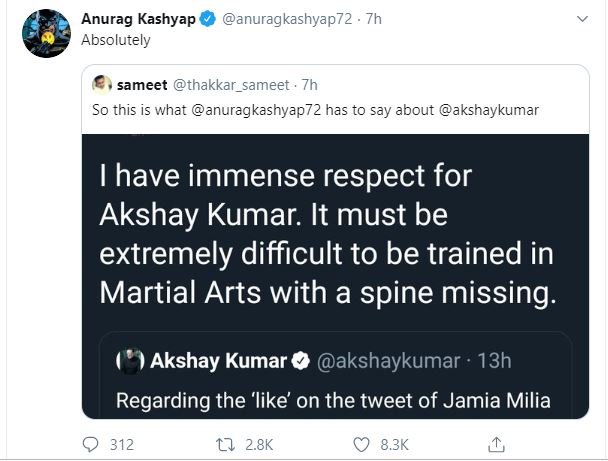 Meanwhile, several Bollywood celebs who refrain from commenting on political scenario or government measures like Ajay Devgn, Ayushmann Khuranna, Taapsee Pannu, Sidharth Malhotra too have reacted to the situation and many have come out in support of the students.

Violence and unrest spread across various states against the Citizenship Amendment Act. Jamia Millia Islamia, became the epicentre of Delhi Police’s brutal crackdown against Citizenship Act protesters on Sunday. From Kolkata’s Jadavpur University to Hyderabad’s Maulana Azad National Urdu University, students have begun their agitation against the authorities. Maulana Azad National Urdu University (MANUU) students' union wrote to controller of examination of university, stating 'due to protests by MANUU students against police's attack on Jamia and AMU students, MANUU students are boycotting exams, request you to postpone the same.'

While the Delhi Police maintains that the action was needed to curb the violence as stones were being pelted on them from inside the university, the students claimed that tear gas was lobbed inside the Jamia’s central library and some of them were dragged, thrashed by the cops.