Bollywood Actors Are Seeking For Their Doppelgangers In India And Abroad And Now Fans Of Akshay Kumar As Found One For The Mission Mangal Actor.

Bollywood actors are looking for their doppelgangers in India and abroad and now fans of Akshay Kumar as found one for the Mission Mangal actor.

Few months back Anushka Sharma spent much time with her lookalike American singer and songwriter Julia Michaels and Jacqueline Fernandez reached out to her, YouTube star Amanda Cerny. 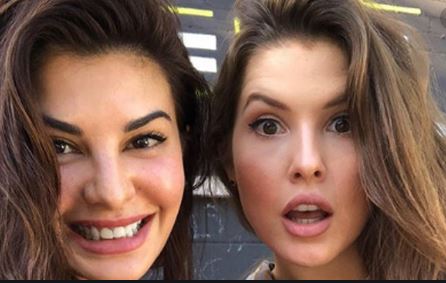 Recently, one of the editors of a leading news channel shared a picture of a commoner Mir Majid from Kashmir. He looks like another version of Akshay Kumar who has aged much, however, shorter in height. While the picture gets circulated on the internet, Netizens are shocked to see such uncanny resemblance.

The Akshay fan wrote, “Akshay Kumar on the sets of biopic of legendary cricket umpire Simon Tuafel.” While the news representative talked about the man who always wears a hat, the old fellow from Kashmir resembles Akshay Kumar to quite an extent. Check the picture below.

Fans could stop but gush about how the Sunil Gavaskar fan looks so much like Akshay. One fan commented, "I zoomed in pic to be sure it's not photo shopped & someone has not pasted @akshaykumar face on him" while some even speculated he looks like Akshay Kumar's twin brother. 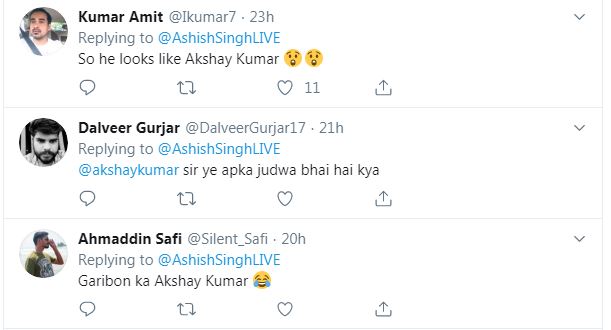 On the work front, Akshay Kumar is enjoying the success of his last release Mission Mangal along with Vidya Balan, Sonakshi Sinha, Taapsee Pannu, Kirti Kulhari, Nithya Menen and others.

The actor will be next seen with Kareena Kapoor in Good News. Not just this, he will be seen performing stunts in Rohit Shetty's action-drama movie Sooryavanshi along with Katrina Kaif. The movie is expected to release on March 2020. His movie Housefull 4 and Laxmmi Bomb are also lined up.

We wonder what the star has to say about finding his duplicate copy in India's new Union Territory.