Alia Bhatt Gears Up For 'Takht' With Karan Johar, Shares On Instagram

Alia Shared An Instagram Story Which Featured The Director Sitting In A Chair In What Appeared To Be An Office Cabin.

Alia Bhatt Gears Up For 'Takht' With Karan Johar, Shares On Instagram

Alia Bhatt, Ranveer Singh and Karan Johar are all ready to start reading sessions for upcoming periodic drama Takht. Alia spent her weekend discussing the movie with Karan while Ranveer too was spooted at the old Dharma Productions office.Â  The actor on Saturday took to Instagram to share a glimpse of her talks with Karan.

Alia shared an Instagram Story which featured the director sitting in a chair in what appeared to be an office cabin.Â The "Raazi" star wasn't visible in the post but shared a sneak peek of a red mug with written "Takht" on it. 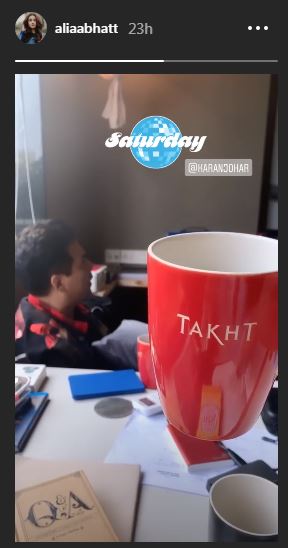 Â "Takht", which has a screenplay by Sumit Roy and dialogues penned by Hussain Haidry, will be directed by Karan.Â  Set in the Mughal era, the film also stars Vicky Kaushal, Ranveer Singh, Kareena Kapoor Khan, Anil Kapoor, Bhumi Pednekar and Jahnvi Kapoor.

"Takht" marks Karan's return to direction three years after the release of "Ae Dil Hai Mushkil". The filmmaker had earlier sharedÂ  a sneak peak of his movie productions revealing it release date to clear rumours that he has not shelved the project.Â

Talking about the project, Karan has earlier revealed that the plot of the drama isÂ  about two warring brothers. 'It has the tropes of court politics. Itâ€™s so rich in texture.' said teh director. Meanwhile it was learnt that Anil Kapoor will essay the role of Shah Jahan, Ranveer Singh will be seen as Dara Sikoh and Vicky Kaushal as Auranzeb in the film.