Be It Us Or Celebrities – Everyone’s The Same When It Comes To Family. And There’s No Better Proof Than The Kapoor Family Who Have A WhatsApp Group Just Like Any Other Family.

Be it us or celebrities – everyone’s the same when it comes to family. And there’s no better proof than the Kapoor family who has a WhatsApp group just like any other family. Recently, Anshula Kapoor shared a screenshot of their family WhatsApp group, where they keep each other constantly updated about their whereabouts.In the group, Janhvi is seen informing her father Boney Kapoor and her big brother Arjun Kapoor that she has landed in Amritsar. Anshula is also seen telling Boney about her whereabouts. She wrote, "Boarded from Delhi."

By the end of the conversation, Boney also wrote to them that he will board a flight to Mumbai from Chennai. Anshula captioned the screenshot saying, "OMG What is this day of only flights. Hahaha." Isn't this just too adorable? 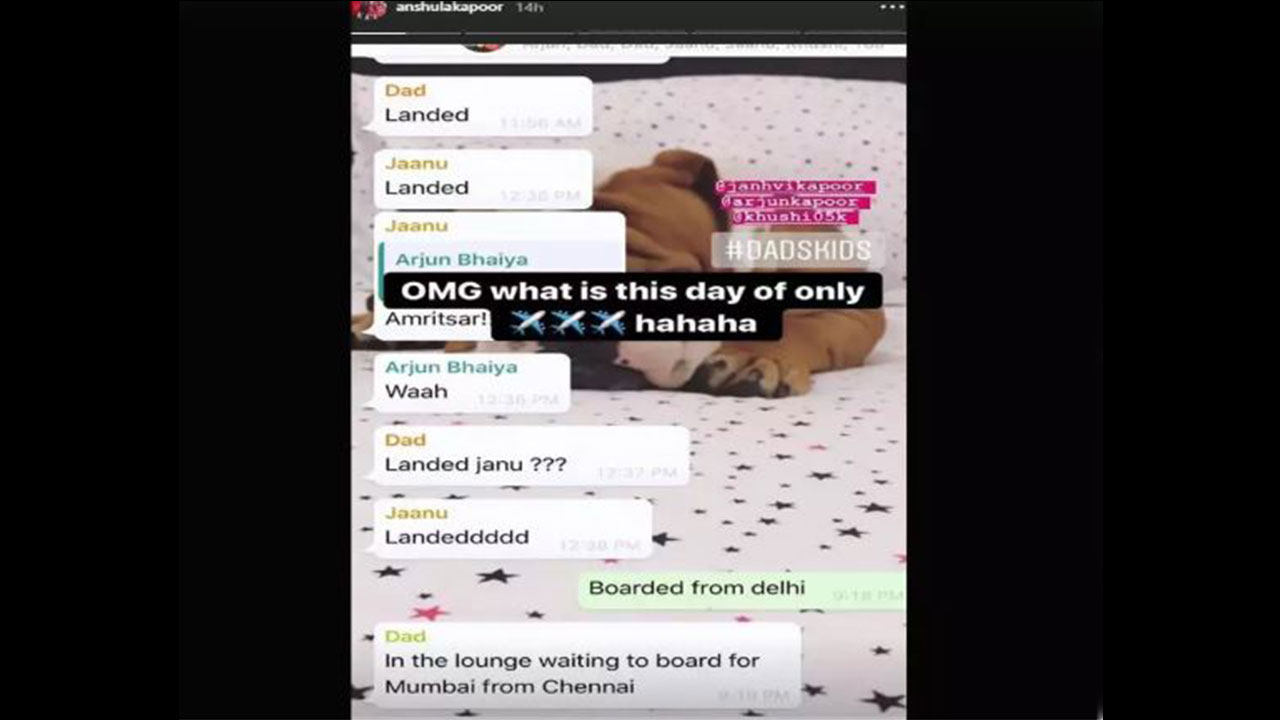 Earlier, in an interview with Cosmopolitan India, Janhvi had revealed that they have a family whatsapp group called Dad's kids. She told the magazine, "We have a WhatsApp group called Dad’s Kids’ which has me, Khushi, Anshula didi, Arjun bhaiya, and dad on it. And I send all my outfit pictures along with looks from different photoshoots on that group. In fact, most of my outfits need to be approved by dad, otherwise, I don’t feel confident wearing them."

Meanwhile, on the work front, Arjun Kapoor is busy promoting his next with Ashutosh Gowariker’s Panipat. It is slated to hit the screens on December 6, 2019. On the other hand, Janhvi has kick started the shooting of Dostana 2 along with Kartik Aaryan.

The actress will be also seen in Takht where she will be a part of an ensemble cast including Ranveer Singh, Vicky Kaushal, Kareena Kapoor Khan, Alia Bhatt, Bhumi Pednekar and Anil Kapoor. Not just this, Janhvi has also collaborated with her father for the first time for a coming-of-age story about a rebellious teenager titled, Bombay Girl.