A Troll On Twitter Abused His Daughter, Aaliyah Kashyap With Unspeakable Words And Even Threatened To Violate Her Modesty

Filmmaker Anurag Kashyap too wished the PM on his victory, however, he also had a complaint to bring to Modi’s notice.

In his tweet, the director said: “Dear @narendramodi sir. Congratulations on your victory and thank you for the message of inclusiveness. Sir please also tell us how do we deal with these followers of yours who celebrate your victory by threatening my daughter with messages like this for me being your dissenter.” 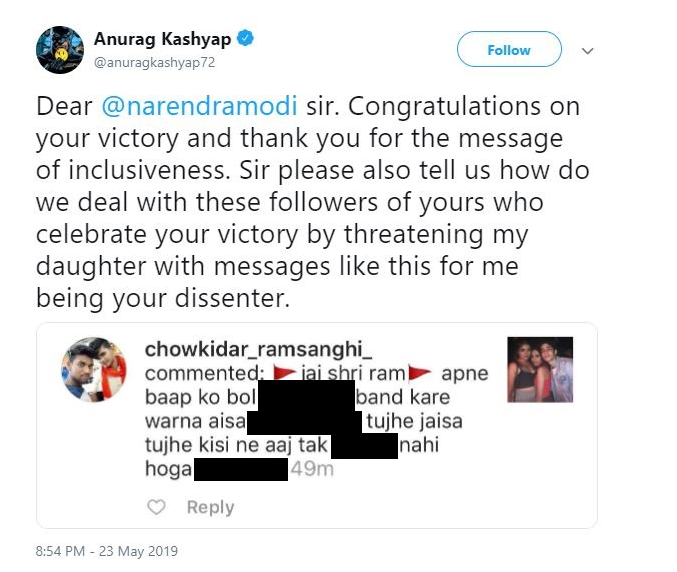 Incidentally, a hater on Twitter abused his daughter, Aaliyah Kashyap with unspeakable words and even threatened to violate her modesty. Anurag even attached a screenshot of the troll’s tweet, which contained regressive words.

Twitterati shared the image of the hate message and stood by the filmmaker . Film trade analyst, Akshaye Rathi commented on Anurag;s tweet saying: “Even though we are at the opposite ends when it comes to our political stance, I stand with you & Aaliyah on this. There are idiots across party lines who talk rubbish & must be condemned, discouraged & not given the only thing they seek - a few minutes of cheap publicity.”

Bollywood celebs are tiem  and attacked on twitter for their remarks, but using abusive words on atennage girl accounts to cyber crime or bullying of highest order and needs to be dealt with strongly.