Coolie No 1: Sara Ali Khan And Varun Dhawan’s 'Cool' Picture From Sets Will Leave You Excited For Film

Varun Dhawan And Sara Ali Khan Have Been Busy Shooting For The Film In Mumbai And Keep Their Fans Updated By Sharing BTS Pictures And Videos From The Sets.

Varun Dhawan and Sara Ali Khan are teaming up for the first time in David Dhawan’s Coolie No 1. The two have been busy shooting for the film in Mumbai and keep their fans updated by sharing BTS pictures and videos from the sets. Today also Sara took to Instagram to share a picture with Varun Dhawan. The two were all smiles as they posed for the camera. Alongside the picture, Sara wrote, ''Cool and Coolie.''

While Varun was seen in his coolie avatar, Sara was wearing was seen wearing an all-white churidar suit. Varun also shared the same pic on his Insta handle and captioned it as, "He’s a COOLie bahut kaam karati hai ‚ yeh Sara Ra". Sara responded by commenting, ''I see you trying to copy, steal and smartly (not really) adapt my captions.'' 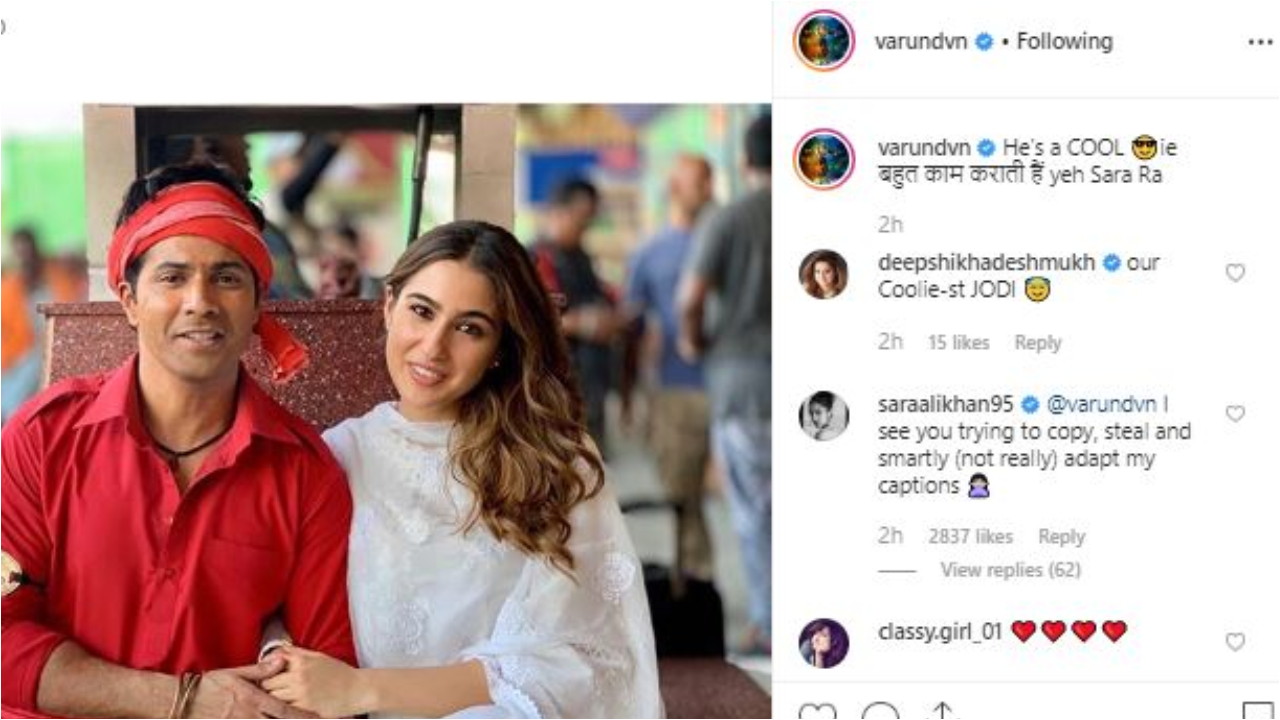 For Coolie No 1 reboot, Varun has stepped into the shoes of Govinda. Sara, on the other hand, will play Karisma Kapoor's role in the film. The cast and crew began filming in Bangkok, Thailand on 7 August.

Earlier in an interview, Varun Dhawan had said the film is not a remake but an adaptation of the original. ''Why I wanted to do this film is because when I watched Coolie No 1, I was so entertained. I had such a good time watching it. It is a family film. It is one of the funniest and most entertaining films I have ever watched. It has an amazing screenplay and starred brilliant actors. We are adapting it. It is not a remake,'' Varun told indianexpress.com.

Coolie No 1, produced by Vashu Bhagnani, Jackky Bhagnani and Deepshikha Deshmukh, is all set to release on May 1, 2020.