Deepika's Third Video In Her â€˜DPismsâ€™ Series Shows Her Trying The Priya Varrier Act Of Winking And Rekindling The Wink Challenge Once For All.

Deepika Padukone has got some really some quirky ways promote for her upcoming film, Chhapaak. The third video in her ‘DPisms’ series shows her trying the Priya Varrier act of winking and rekindling the wink challenge once for all.

Deepika is seen having a conversation with director Meghna but she soon she turns to the camera and surprises fans with a Priya Varrier like wink. The video ends with a message: “Get that Priya Varrier”.

“Episode 3 of #dpisms !!! @priya.p.varrier #chhapaak #10thjanuary,” Deepika wrote alongside the video that shows a glimpse from her first day on sets of Chhapaak. 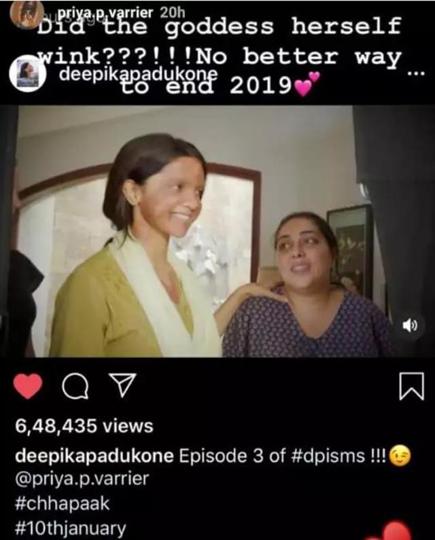 For the uninitiated, Priya Varrier rose to fame when a clip of her winking at a classmate in her debut film went viral. The clip was from Manikya Malaraya song from the film, Oru Adaar Love and made her viral sensation overnight. The widely shared video left everybody asking for the name of the actor.

Penned by Atika Chohan, Chhapaak is set to hit theatres on January 10. 2020.