In A Video Shared By A Fan Club Of Deepika On Twitter, She Is Seen Giving Back To The Trolls.

Deepika Padukone received much backlash from a section of netizens for her visit to JNU two days before the launch of Chhapaak Negative trends and hashtags did rounds for a long period. Nevertheless, the movie braved the snub and gathered positive reviews from critics. IMDB rating for the film however soon became the target of the ‘#BoycottChhapaak’ gang and were bombarded with negative user reviews, as a method of protest against the actress turned producer’s decision to visit JNU. Deepika finally has opened up about all the backlash she received and the IMDB snub.

In a video shared by a fan club of Deepika on Twitter, she is seen giving back to the trolls. She is seated with her director Meghna Gulzar and can be heard saying that they have changed the IMDb rating and not her mind, modifying a dialogue from her movie according to the situation which originally is, “Usne meri suraat badli hai, maan nahi” (They have changed by face, not my mind) Check out the video below:

IMDB rating are purely based on voters rating and not that of critics and movie reviews run by media houses. IMDb registered users can cast a vote (from 1 to 10) on every released title in the database. Individual votes are then aggregated and summarized as a single IMDb rating, visible on the title’s main page. Users can update their votes as often as they’d like, but any new vote on the same title will overwrite the previous one, so it is one vote per title per user.

The film's page on the website is full of negative reviews from multiple accounts. Out of 6900 votes, 4000 of them show the lowest ranking which has taken the film's rating down to 4.6 stars on the review aggregator website. 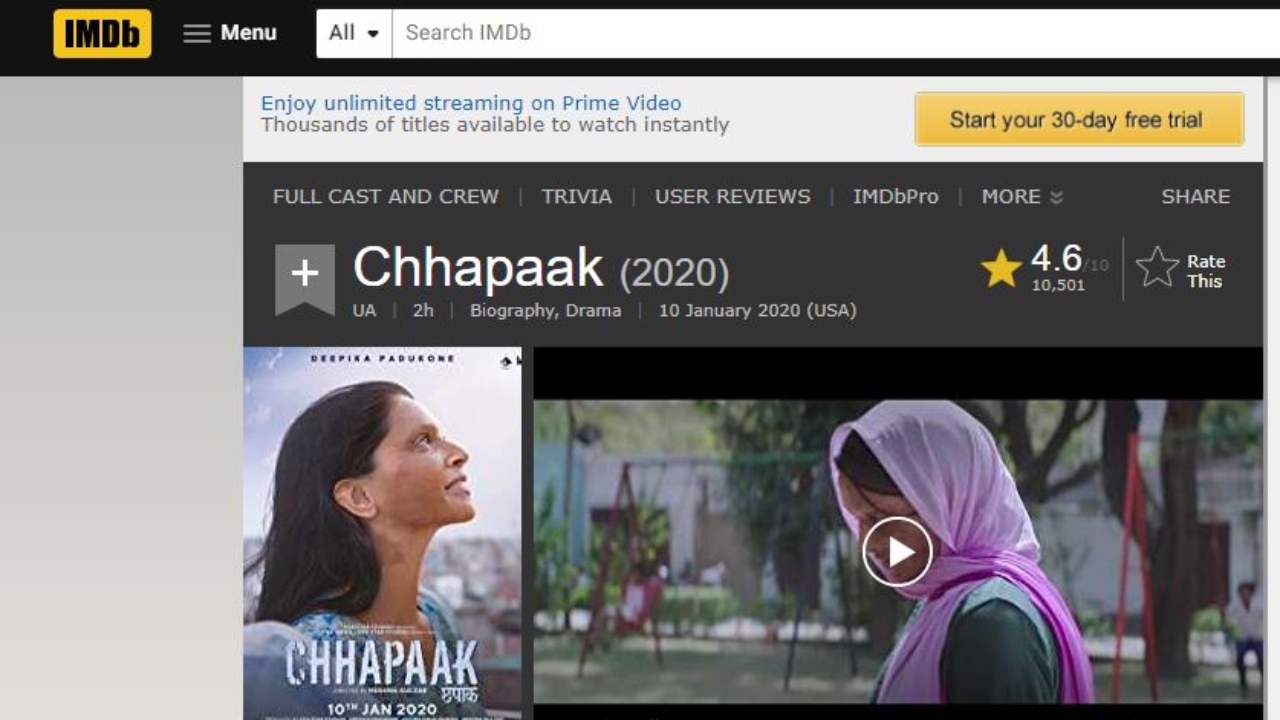 IMDb in its website mentioned that it never delete or alter individual votes and we do not adjust the results of our automated weighted rating for any individual movie / TV show. If the rating is lower than expected, it simply means that IMDb users who voted have a different opinion than those reviewers who liked it.

A similar situation was faced two years ago by director Anubhav Sinha for his film Mulk. He had also faced an attack on the film's IMDB rating and had tweeted at the time, "The IMDB rating of #MULK is being attacked. You know what? I don’t give a Flying F***!!! MULK has received too much love to worry about that. More people love the film. They will respond to you".

Meanwhile Deepika who recently announced a Hollywood remake of The Intern with Rishi Kapoor was trolled for asking to recreate her Chaapaak look in a social media challenge!