Deepika Padukoneâ€™s Chhapaak Gets 4.6 Rating on IMDb; Netizens Get Suspicious About Voters

Deepika Padukone received much backlash from a section of netizens for her visit to JNU two days before the launch of Chhapaak with negative trends and hashtags doing rounds. Nevertheless, the movie braved the snub and gathered positive reviews from critics and is finally picking up at the box office. However, the combat against her film is far from over as after several people's pledge to boycott her film, it has now been observed the IMDB rating for the film is also being attacked.

Haters are believed to be targeting the popular movie rating site to convince people that the movie is not worth a watch a method of protest against the actress turned producer’s decision to visit JNU.

IMDB rating are purely based on voters rating and not that of critics and movie reviews run by media houses. IMDb registered users can cast a vote (from 1 to 10) on every released title in the database. Individual votes are then aggregated and summarized as a single IMDb rating, visible on the title’s main page. Users can update their votes as often as they’d like, but any new vote on the same title will overwrite the previous one, so it is one vote per title per user.

The film's page on the website is full of negative reviews from multiple accounts. Out of 6900 votes, 4000 of them show the lowest ranking which has taken the film's rating down to 4.6 stars on the review aggregator website as we do this story. 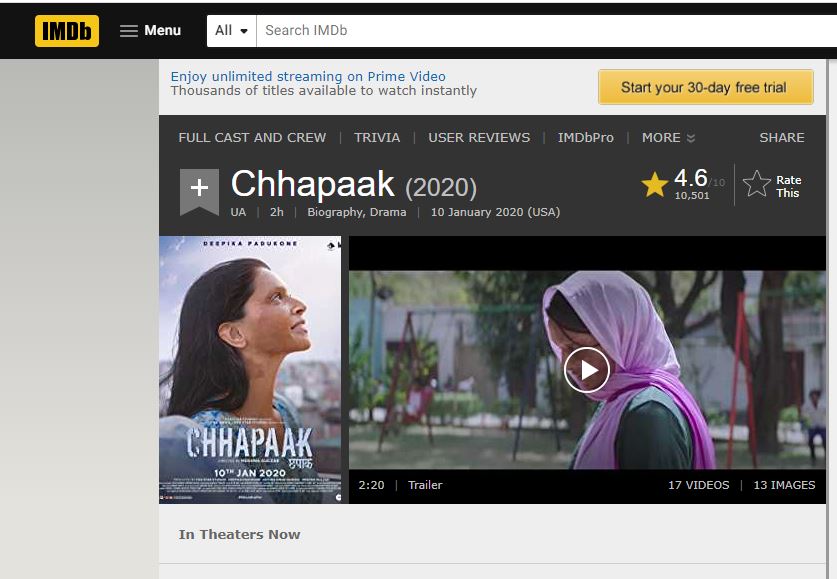 IMDb in its website mentioned that it never delete or alter individual votes and we do not adjust the results of our automated weighted rating for any individual movie / TV show. If the rating is lower than expected, it simply means that IMDb users who voted have a different opinion than those reviewers who liked it.

Meanwhile, this week's another big release Tanhaji: The Unsung Warrior received 8.8 stars and has recorded 5800 votes out which 4300 gave the film a '10' star rating. 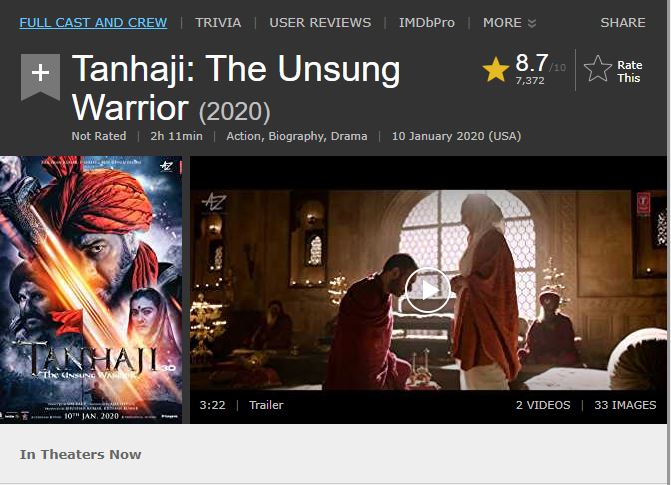 Bhakts at it again. #Chhapaak is 4.3 on IMDB. Compare this to Tanhaji which is 9.0 currently. What else can you expect from such lowlifes? pic.twitter.com/A85p2ByccA

Sad to see that #Chhapaak despite being a good film caught in the vortex of hatred between ideologies. Many are attakcting its IMDB rating for no reason , by doing so they are not harming @deepikapadukone instead they are ceasing awareness and good lesson being given by film .

The idiot bhakts are deliberately rating #Chhapaak low on #IMDB even without watching the film. The critics section (10-13 reviews) is positive but still film has 4.3/10 rating right now. They think by doing this they can demean the stature of the film! Idiots ðŸ˜‚ðŸ˜‚

A similar situation was faced two years ago by director Anubhav Sinha for his film Mulk. He had also faced an attack on the film's IMDB rating and had tweeted at the time, "The IMDB rating of #MULK is being attacked. You know what? I don’t give a Flying F***!!! MULK has received too much love to worry about that. More people love the film. They will respond to you".