Did Rohit Shetty Unfollow Katrina Kaif After His ‘Nobody Will Notice You’ Comment?

Katrina Kaif Later Clarified On Her Instagram Story That The Director's Statement Has Been Taken Out Of Context.

Seems like the controversy around Rohit Shetty's statement on Katrina Kaif is not going to die anytime soon. In an interview with Film Companion, the filmmaker had spoken about the iconic scene in Sooryavanshi where Akshay Kumar, Ajay Devgn, Katrina Kaif and Ranveer Singh are seen in the same frame. Rohit had said that Katrina's 'blinking' in the scene won't be seen by anyone and netizens slammed him for alleged sexist remark. However, Katrina later on clarified on her Instagram story that the director's statement has been taken out of context. Now as per reports in Mumbai Mirror, Rohit has unfollowed Katrina on Instagram after receiving backlash on social media pages, while she continued to follow the filmmaker.

For the uninitiated, Rohit had told Film Companion, "If you look closely, she (Katrina Kaif) is blinking during it. After the fourth take she came to me and asked 'can we take one more?' and I said Katrina, I will tell you honestly, no one is going to look at you. She (Katrina) got so wild and I said three guys are walking with blasts happening behind, nobody will notice you. And I kept that shot. In the promo, she blinks while walking. But kaun dekhega."

After Shetty got slammed, Katrina wrote on her Instagram story, "Dear Friends and Well-wishers... I normally do not comment on media reports or articles... But in this case, I feel a comment made by Rohit Sir has been taken out of context and is been entirely misunderstood. I am referring to the comment as reported that Rohit Shetty said, 'No one would look at me in the frame, as there are three boys there and a blast happening"', this is not what was said." 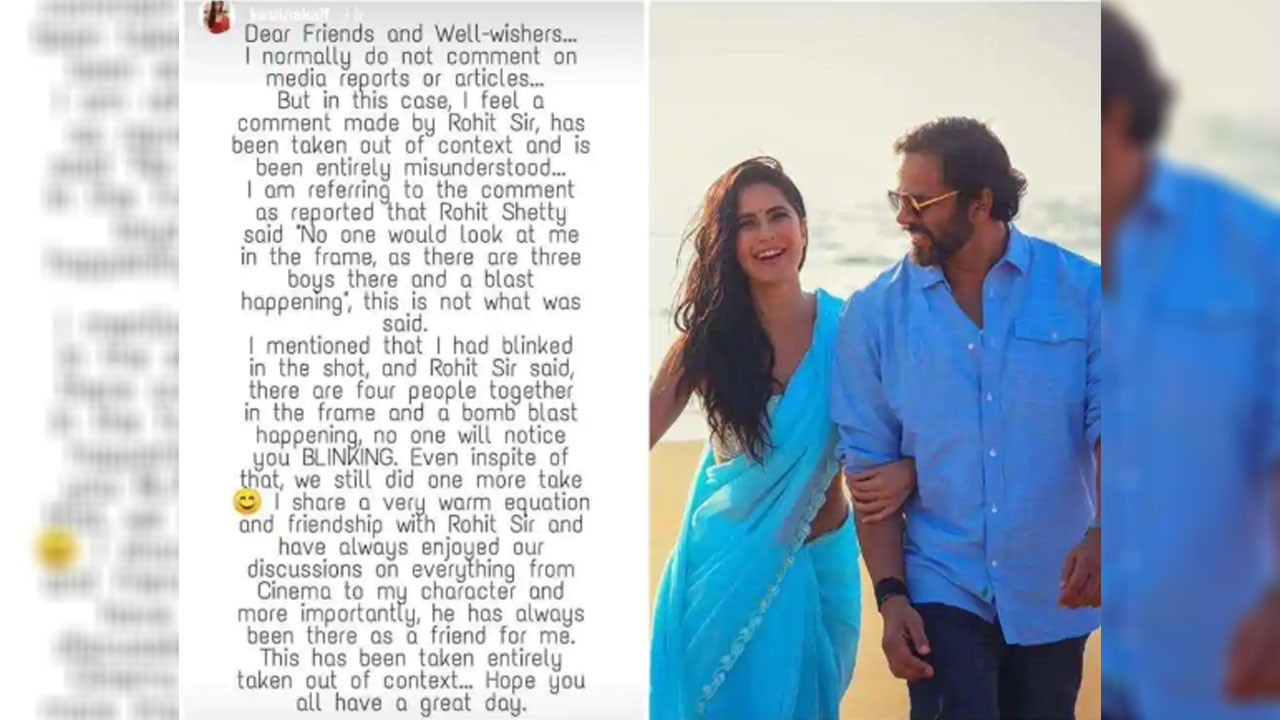 She added, "I mentioned that I had blinked in the shot, and Rohit sir said, 'there are four people together in the frame and a bomb blast happening, no one will notice you BLINKING.' Even, despite that, we still did one more take. I share a very warm equation and friendship with Rohit sir and have always enjoyed our discussions on everything from cinema to my character and, more importantly, he has always been there as a friend for me. This has been taken entirely taken out of context. Hope you all have a great day."

Sooryavanshi is the fourth instalment in the Rohit Shetty cop universe, following Ajay Devgn's Singham and Singham Returns, and Ranveer Singhâ€™s Simmba. In the film, Katrina plays doctor and is paired opposite Akshay. Sooryavanshi will hit the screens o March 24.Â