Electorates Of Madhya Pradesh's City Indore Is Casting Their Vote Today But Bhopal Cast Its Vote On May 12.

Filmmaker turned actor Farhan Akhtar in a major goof up asked Bhopal electorates to make their choice today when the elections at the city happened a week ago already.

Farhan Akhtar, in a strong, hard-hitting tweet for Bhopal, wrote, "Dear electorate of Bhopal, it’s time for you to save your city from another full-of-gas tragedy. #SayNoToPragya #SayNoToGodse #RememberTheMahatma #ChooseLoveNotHate" attacking the wrath of netizens who trolled him for not knowing the election dates. 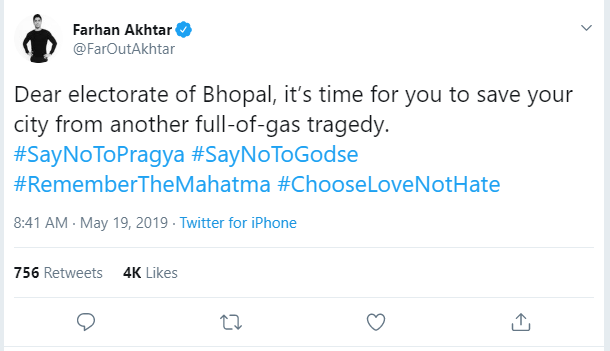 The actor has in another instance has already expressed his dislike for BJP's Lok Sabha candidate for Bhopal,  Sadhvi Pragya . "Somebody please get this woman back on her meds asap." tweets the actor with a video post where the politician is seeing saying, 'Nathuram Godse was a 'deshbhakt', is a 'deshbhakt' and will remain a 'deshbhakt'.

What a gas bag! You better take something for your gas problem, it's making you foggy. https://t.co/nQ26RZ1HJO
Because #Bhopal has already voted for @SadhviPragya_MP on 12th.

Farhan either u r too early or you are too late...I guess the cheque got cleared yesterday only #Paidtweets

On the work front, Farhan Akhtar will soon be seen in Shonali Bose's The Sky Is Pink alongside Priyanka Chopra, and Rakeysh Omprakash Mehra's Toofan.