Rangoli Claimed That The Queen Actress’ Income, As Shown By The List, Is Incorrect.

Forbes India has recently published its list of Celebrity 100 for the year 2019 which has been topped by Indian cricket captain Virat Kohli with the earning of Rs 252.72 crore. Among the female Bollywood celebs Alia Bhaat features in 8th spot followed by Deepika in 10th.

Kangana Ranaut’s rank at 70th position after Sara Ali Khan, Taapsee Pannu was not taken in good spirits by sister Rangoli Chandel who called them ‘fraud’ for divulging ‘confidential information'.

Moreover, Rangoli claimed that the Queen actress’ income, as shown by the list, is incorrect. In fact, Rangoli claims that Kangana pays more tax than her entire income mentioned in the list.

Rangoli Chandel, Kangana Ranaut’s sister and manager, is unhappy with the latest Forbes India’s Celebrity 100 list. She says that the Queen actress’ income, as shown by the list, is incorrect. In fact, Rangoli claims that Kangana pays more tax than her entire income mentioned in the list. Kangana has ranked 70th in the 2019 list, in which celebrities are ranked as per their income and their fame quotient.

Rangoli took to Twitter and shared a series of tweets. In her first post, she said, “Yeh @forbes_india ek number ka fraud hai, I openly challenge them to prove even one celebrity income they have printed in their magazine, sab PR hai, Kangana pays more tax than her entire income mentioned in the poll...”

Tagging Forbes India, Rangoli demanded that they should be transparent about how they assumed people’s income and on what basis. 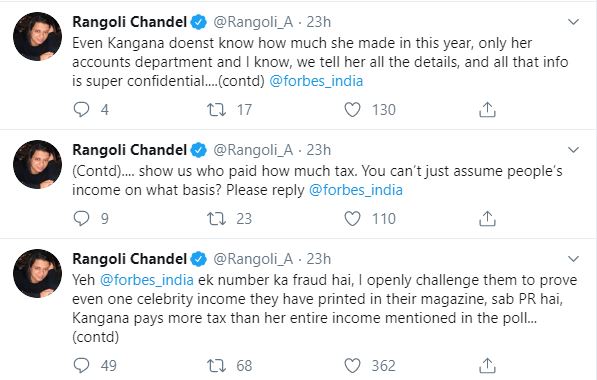 This year, the list shows Kangana’s earnings in 2019 as Rs 17.5 crore from her films and endorsements. Kangana was also part of the list in 2017 when she was ranked on the 26th position and her earnings were shown as Rs 32 crore. The list also mentions that in 2019 while her earnings were Rs 17.5 crore, her absence from social media was a factor that affected her fame quotient, which ultimately was a consideration in determining her ranking.

Meanwhile, Forbes India mentioned that the rankings are based on estimates of earnings through professions and endorsements of celebrities and estimates of their fame for the October 1, 2018 to September 30, 2019 and the numbers are merely indicative. The rank is an aggregate of the estimated earnings and the fame quotient.